Gurmehar Kaur And The Battles The Right Must Learn To Avoid 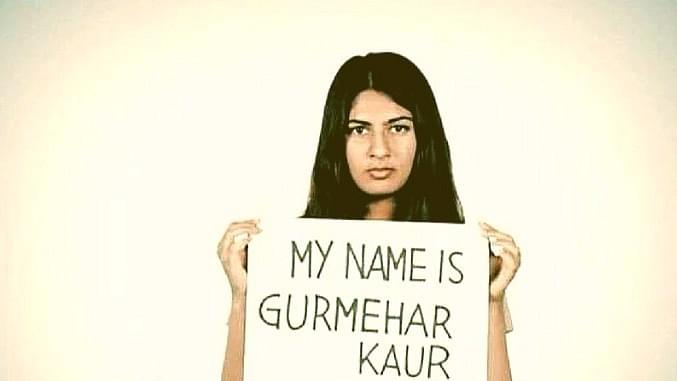 The verbal fisticuffs in social and national media over 20-year-old Gurmehar Kaur’s posts show, once again, that the Right does not always pick its battles wisely. Kaur, the daughter of an Indian soldier martyred in Kashmir, claimed in a social media post that war, and not Pakistan, had killed her dad. In another placard, she offered another red rag to the bull by claiming she was “not afraid of ABVP” – a veiled reference to the Sangh’s student affiliate that was allegedly behind the fracas at Ramjas College.

With Virender Sehwag (who claimed his bat scored two triple centuries, and not he himself), Minister of State for Home Kiren Rijiju (who asked who polluted her mind), and a Bharatiya Janata Party MP (who suggested that at least Dawood Ibrahim did not say such things using his father’s martyrdom as cover) pitching in against Kaur, the Right has lost this argument even before the bugle was sounded. Not because it does not have the right arguments, but because it is so easy for its rivals to turn the tale into one between bigoted, misogynist, war-mongers and a poor “girl”. That “girl” is hardly the term to use for a young, adult woman who has spoken her mind, howsoever naively and idealistically, does not matter. It has been used deliberately with the idea of showing that this is a battle of unequals and we know who deserves protection. That some wild elements on social media threatened rape and murder could hardly have helped change this perception. The Times of India in Mumbai ran a tendentious headline “Minister, MP attack Kargil martyr’s girl”, as if someone physically assaulted her, and presuming that the views of a Kargil martyr’s “girl” are by definition beyond even verbal challenge.

The Right needs to learn a few tricks from SLOBs – the “secular, Left outrage brigade.” While control of the old media (basically English newspapers and TV channels) helps SLOBs manoeuvre the discourse in the direction they want, their standard tricks can work anywhere.

First, count only the “facts” that are convenient to your cause, not those that may go against it. This is how the “church attacks” narrative was manufactured. That there were 40 times more incidents involving temples around the same time did not count at all. This is how editors in old media frame debates using isolated instances across a diverse country of 1.25 billion people to manufacture a story when there may be only disjointed events. Thus, a Rohith Vemula suicide was painted as a crime against Dalits, and linked to violence against Dalits in Una or UP. A Mohammad Akhlaq’s anti-beef killing will, on the other hand, never be balanced with the killing of gau rakshaks in Karnataka.

Second, silence is golden, when convenient. You can ignore heinous crimes if they are done by those you believe are on your side. The burning down of a police station by irate Muslims mobs in Kaliachak or the communal violence unleashed in Dhulagarh by similar mobs, or the killings of Sangh followers in Kannur are never discussed openly. Instead, they will be blamed on Sangh propaganda. Even simpler, once you label the Sangh as communal, it follows that whatever happens must be their fault. This was the exact argument used by a Times of India editorial on 27 February 2002, when a coach containing kar sevaks was torched by a Muslim mob. Violence against the Sangh or small Hindu groups will be treated as well-deserved, and dismissed with expressions of minor regret. Minor violence, even if it happened in the heat of a situation, will be painted as a deep conspiracy to foist a saffron agenda on helpless students exercising their freedom of expression. And in Dhulagarh, if the media reports on a communal incident, it is the media which is wrong, and no charge of intolerance stands against such a state already declared secular.

Third, launch tangential attacks, when you can’t overtly attack the Right or Hindu organisations. The SLOB technique is to use sophisticated ecological and other arguments to essentially back a communal agenda. Thus the Amarnath Yatra will be sought to be curtailed for ecological reasons. A Sri Sri Ravi Shankar festival on the banks of the Yamuna will be opposed using the same arguments. Firecrackers during Diwali and Jallikattu will be attacked using ecology and animal rights as the banner, when Bakri-Id and Thanksgiving, which involves the ritual murder of animal and bird for religious or cultural reasons, will not be targeted. An exquisite 112-foot Shiva statue put up by Isha Foundation near Coimbatore attracts a public interest litigation (PIL) saying it violates the tribal community’s close relationship with the forest ecosystem. This contrasts with the reality that almost all major temples, mosques and churches tend to choose such spots for construction. But no such PIL has ever been faced by towering churches in city spaces or Wahhabi mosques in water-scarce districts.

Fourth, change the argument if what you have done is not so defensible. Thus, when Jawaharlal Nehru University heard slogans about Bharat ke tukde tukde in February 2016, the argument was turned around to say no one can label anyone else as anti-national. And this from people who have arrogated to themselves the right to decide who is communal or secular without any transparent definition of the term. Thus, SLOBs can anoint entire groups of people as communal, and give a pass to minority communalists, but they themselves can never be called anti-national, even if their words and acts fit the definition.

Fifth, there is the “lie-big-but-make-no-apologies-when-wrong” trick. In March 2015, when some men gang-raped a 71-year-old nun, a West Bengal Minister went to town claiming this was the result of the Ghar Wapsi programme of the Sangh.

And yet, when the culprits were shown to be Bangladeshi Muslims, we heard not one squeak from the minister who wanted to shoot them dead. No one remarked on his intemperate remarks. One can only imagine what he would have said if the culprits happened to be even remotely connected to any Hindu groups.

Coming back to the Gurmehar Kaur case, it seems partly about extreme naivete. Young people tend to be idealistic, and often frame issues in black and white. Thus, there are those who will light candles at Wagah, and others who will go to fight for Islamic State to establish justice on earth. Others will want to kill class enemies to help the poor, while certain others will brand Hinduism as a whole as invalid due to caste injustices.

Sooner or later, naivete will come face-to-face with reality. Simpletons will learn the hard way that the world is not black and white. Dharma involves negotiating the tricky path that is mostly grey. Kaur will learn too.

Yes, it is true that war killed Kaur’s dad, but wars have causes, and there can be right causes and wrong causes. Kaur’s dad was fighting for a secular cause, while his killers were fighting for Islamism in Kashmir. Moreover, war may be the cause of her dad’s death, but wars are not natural calamities like earthquakes or floods for which one can’t blame anyone. Sure, the ordinary Pakistani is not deserving of our hate, but the Pakistani state that keeps drilling anti-India and anti-Hindu hatred into its citizens’ minds cannot be said to an innocent drawn to war. The idea of a 1,000-year war with India was the invention of the Pakistani army, and the instruments used are jihadi elements. This is hardly a war where moral questions are irrelevant. Kaur will learn that soon when she moves out of campus into the real world.

Another example of Kaur’s naivete relates to her decision to isolate Akhil Bharatiya Vidyarthi Parishad (ABVP) as the sole villain. While no one needs to carry a brief for ABVP if it roughed up people in Ramjas College, but surely Kaur cannot be unaware that the All India Students' Association and All India Students Federation unions are hardly paragons of peace on campus. It was certainly wrong on Rijiju’s part to ask who is polluting her mind, but her claim on TV that she was not being used is hardly credible. She may have made her statements on her own, but surely she can see who are milking it for their political ends?

However, the real lesson to learn for the Right from this development is to know which battles to fight and which ones to ignore. Taking on a naïve and possibly idealistic young woman is not going to get you any brownie points even if she is 100 per cent wrong. Ignoring it would have been the best option. By joining the fight, the Right has given SLOBs a chance to paint them in worse colours than the situation warrants.