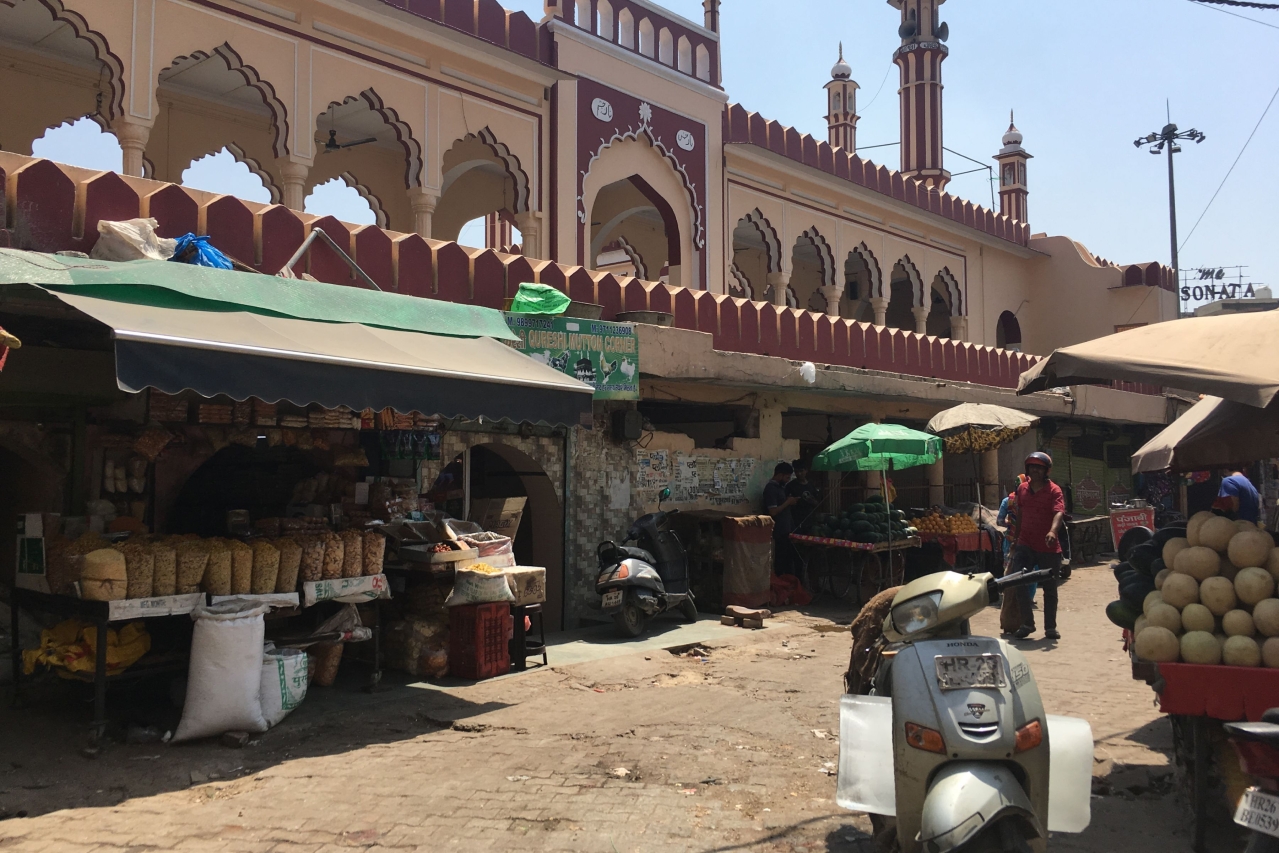 Mohammad Barkat Alam, who is at the centre of the Gurugram communal assault case, refuses to talk over the phone and hands over the mobile to his cousin Murtaza. Murtaza tells this correspondent that 25-year-old Barkat is young and gullible and, as his guardian, he has advised Barkat against talking to the media. He says they are poor and illiterate and don’t want all this “bakheda” [chaos].

After some persistence, however, Murtaza agrees to meet this correspondent at their workplace in Gurugram on the condition that no video would be recorded.

Murtaza, who is in his 40s, works in a tailoring shop in Gurugram's Jacob Pura, around 30 kilometres from New Delhi. The shop is located in a basement in a lane called 'Jacob Pura Meat Market'. There is, however, no sign of a meat market except for a small banner saying 'wholesale chicken and retail' outside a closed shop. All shops in the vicinity are shuttered. 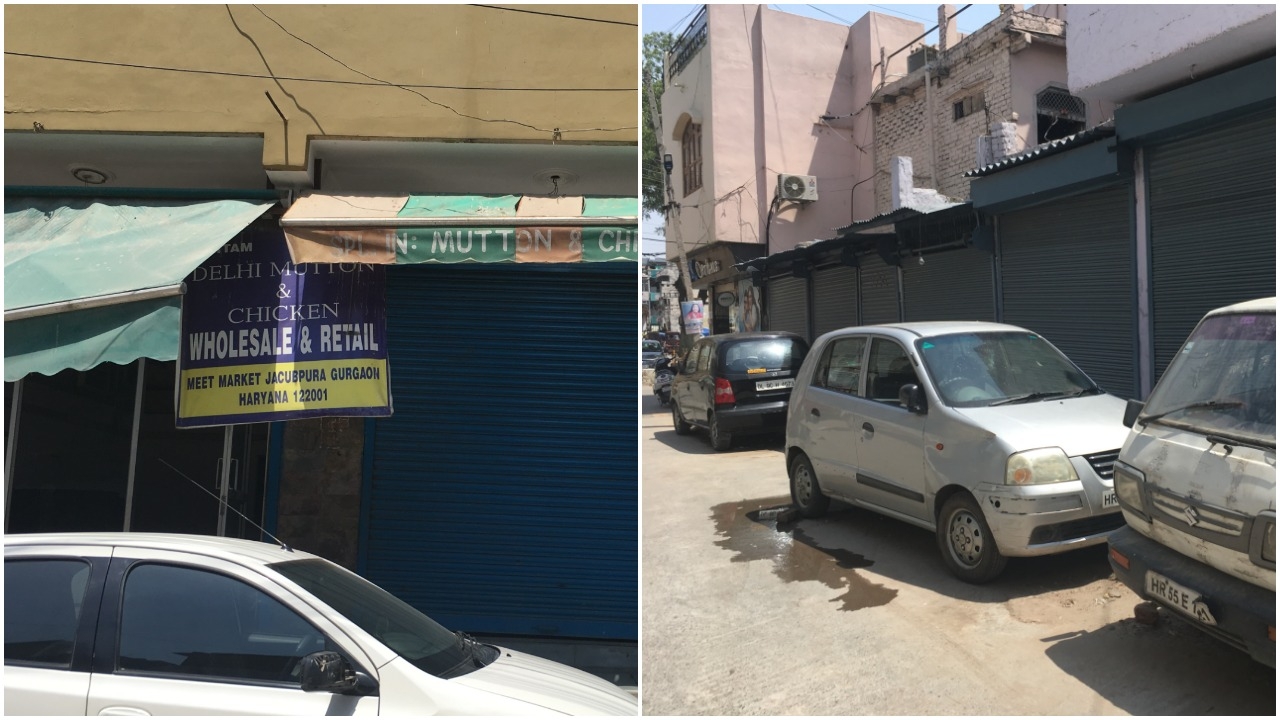 A view of the ‘Jacob Pura Meat Market’.

Locals say the meat market was closed down two years ago.

"The market was operating just metres away from a Hanuman temple. It hurt the local sentiments," says Gaurav Kumar, a shop owner adjoining the temple.

When asked who led the agitation to remove it and if the move was against the resident Muslims, Kumar laughs. He says the meat market was run almost entirely by Hindus — Khatik and Valmiki castes to be precise — who sold jhatka meat. He says that locals complained to the district magistrate after taking inspiration from Yogi Adityanath's spirited crackdown on illegal slaughterhouses in neighbouring Uttar Pradesh.

"There is nothing Hindu-Muslim about it," says Gaurav, and adds, "You must have come after hearing about the topi incident. I don't know much about the case but this is a very peaceful area."

In the one-room basement shop, Murtaza and three other tailors are working with sewing machines. Barkat is ironing clothes in a corner. 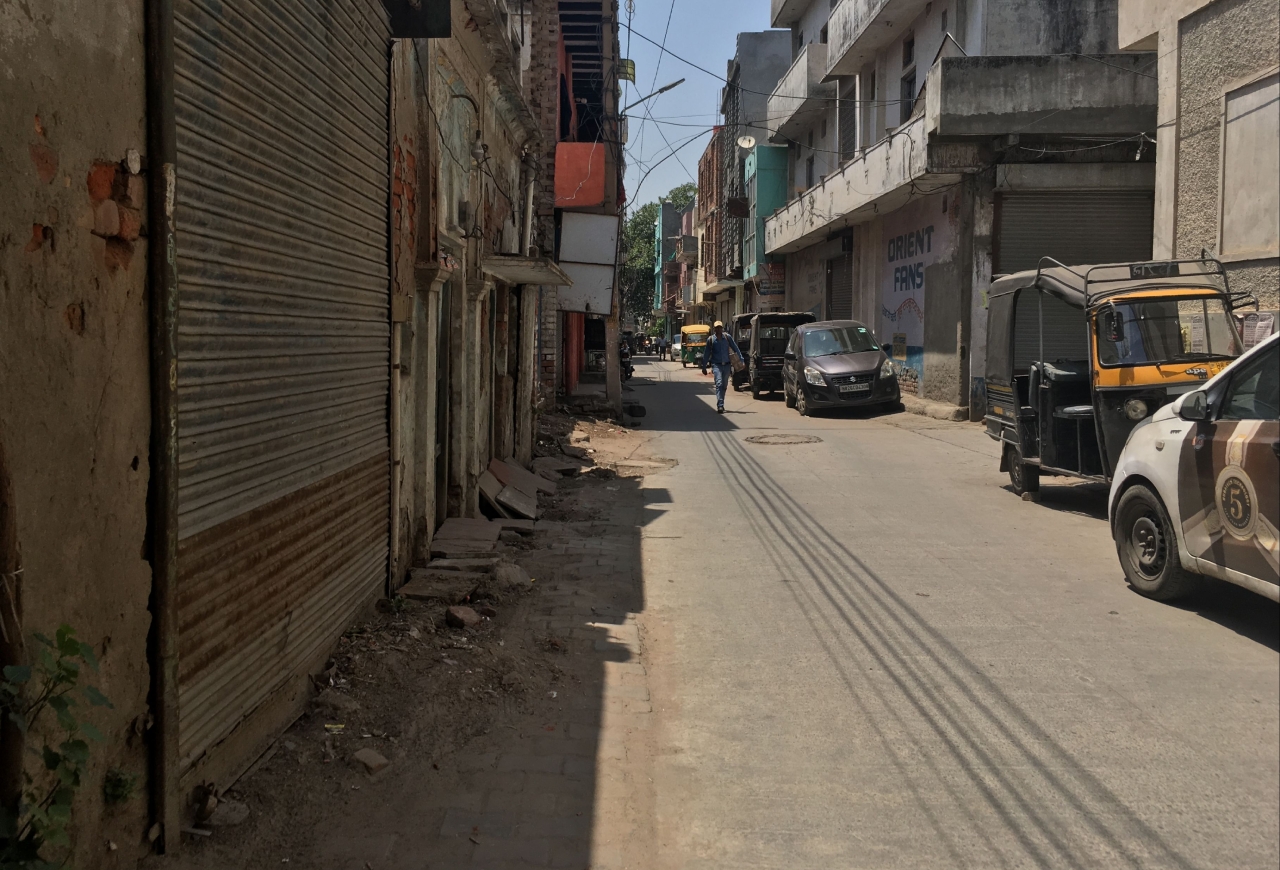 Meat shops have been closed for two years in Jacob Pura.

The cousins hail from Begusarai in Bihar. While Murtaza has been living in Gurugram for 45 years, his cousin shifted two weeks ago to learn tailoring. Barkat, who lost his father at an early age, was earlier in Madhya Pradesh, where he worked as a mason.

On 25 May, Barkat lodged an FIR (first information report) against unknown men at city police station, saying that when he was returning from the Jama Masjid in nearby Sadar Bazaar around 10.15 pm, six unknown men cornered him — four were on motorcycle and two were on foot. They were drunk and told him that skull cap was not allowed in the area. They hurled abuses at him, and the two men thrashed him and even threatened him with his life.

The matter was blown up the next day as Barkat gave statements to several television news channels where he also revealed that he was forced to say 'Jai Shri Ram’ and ‘Bharat Mata ki jai’. 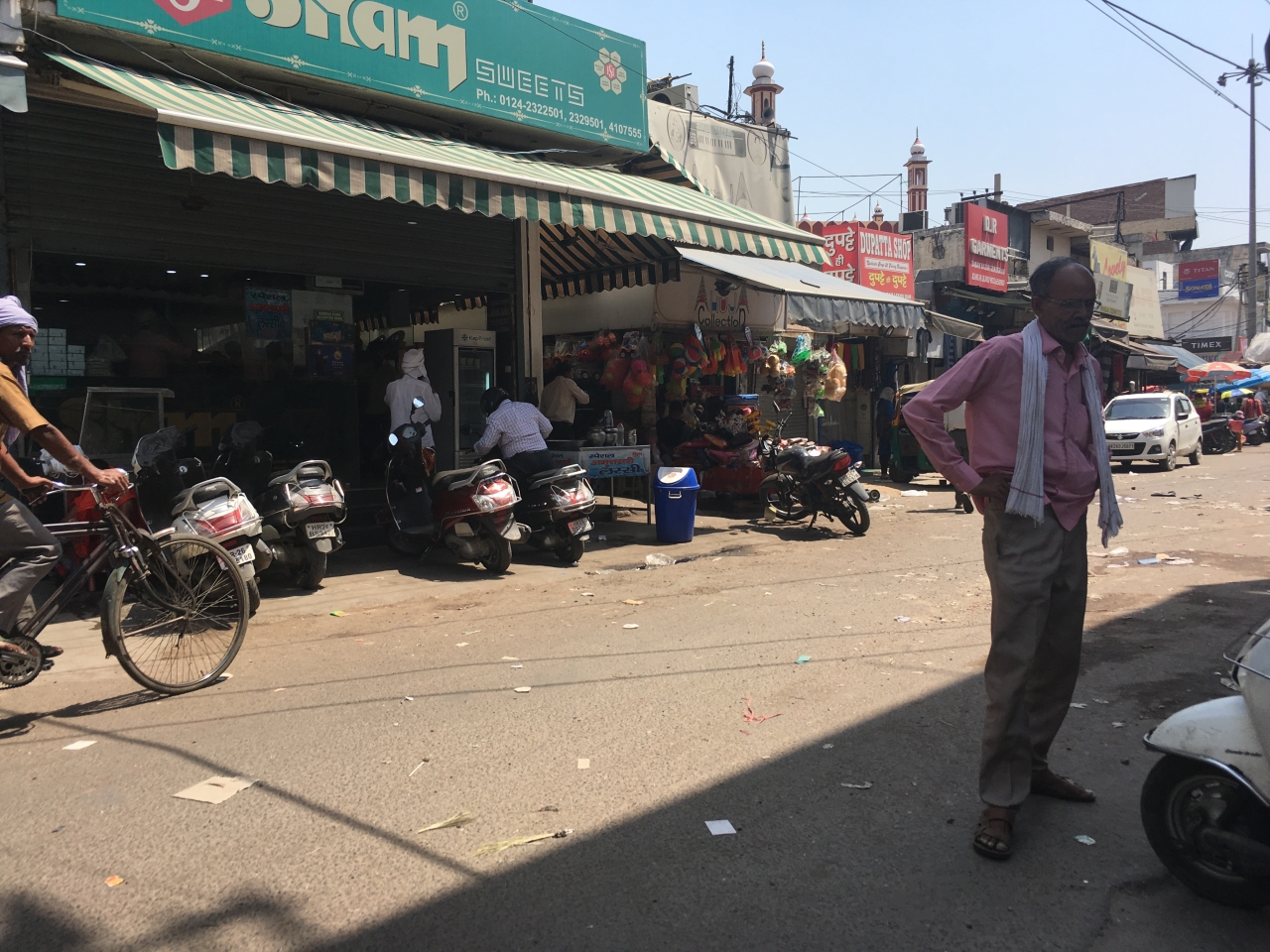 The site of the incident.

When this correspondent met him on Wednesday (29 May), Barkat did not know that several of his claims had been refuted by the Gurugram police a day ago.

On 28 May, Gurugram Police Commissioner Mohammad Akil held a press conference and said that many of Barkat's allegations do not match with his statement in the FIR as well as with the footage obtained from CCTV cameras.

For instance, while Barkat said in the FIR that six men accosted him, CCTV shows two men, out of which only one attacked him. While Barkat told the media that his skull cap was forcibly removed, video shows the attacker hitting him on his head which displaces his cap and Barkat himself puts the cap in his pocket. While Barkat told the media he was asked to chant Jai Shri Ram and Bharat Mata ki jai, police says he did not mention it at all in the FIR.

Akil even told the media that he feels the victim might have been tutored. "I feel someone may have tutored him because if you see his statements in the media, they appear like he was tutored," said Akil. In his defence, Barkat says that he did tell the police about the slogans but, being an illiterate, he did not know what the cops ended up recording. On the gaps between his allegations and the probe, Barkat says the CCTV seems to have captured only one angle and the other attackers were probably out of view. He also shows his white kurta torn at the shoulders and asks, "Is this kurta lying?"

"I stand by my statement," says Barkat and shows reluctance to speak further.

Murtaza intervenes and says the police have been very helpful and that he has no complaints. "An officer gave us Rs 300 for medical treatment that night. Another officer gave us Rs 100 for auto fare," he says. "Sahab has given us his phone number and assured us that if anyone harasses or threatens us, he will immediately send the force to our doorstep.”.

Murtaza says he does not know if Barkat told the police about the slogans on that night. "I do not remember that. We are poor, illiterate people," he says.

"If only Barkat had stayed for the Taraweeh namaz, he wouldn't have returned alone then, but in a group," says Murtaza.

"All this tamasha happened after Barkat went to Delhi," he adds.

He says a local man named Haji Shahzad Khan helped them get the documents back without the trouble of making another trip to the police station. "We are grateful to him," says Murtaza, but adds that he is irked at what Khan did next. Around 10 am, when Murtaza was not at home, Khan took a tired and drowsy Barkat to New Delhi where "god knows what kind of videos" were made.

"I am his guardian. Shahzad should have asked me at least," says Murtaza. "Wahan Dilli villi mein kya kya banwaya... uske saath kya kya video banwa diya" [There in Delhi, they made god knows what kind of videos]," he says.

Asked where in Delhi was Barkat taken, Murtaza says the boy is new to the city and does not recognise or recall the place.

At this moment, other tailors interrupt him. They ask this correspondent to leave citing trouble, and say the matter is with the police and they should not be speaking to the media. 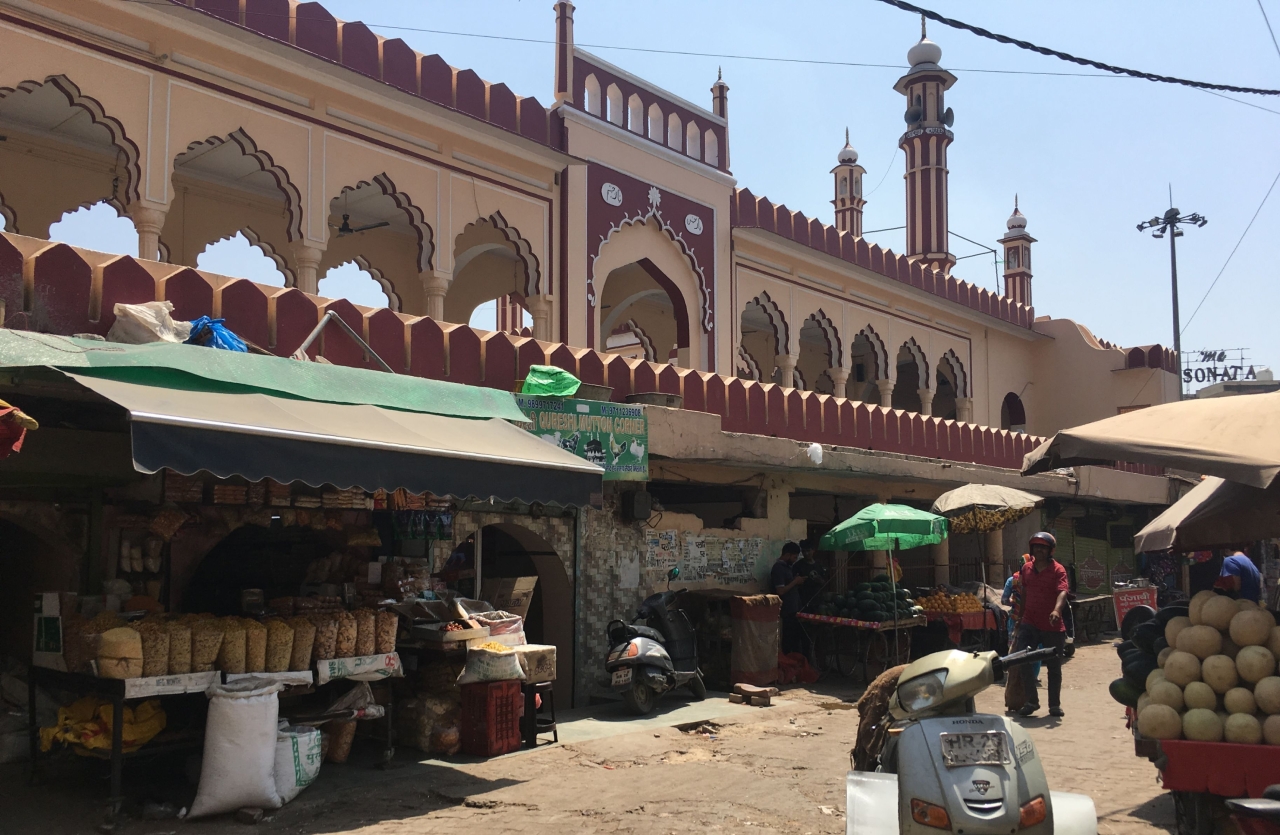 The Jama Masjid at Sadar Bazaar.

The Jama Masjid is at walking distance, less than a kilometre away from their rented house. The light orange and red building is located in a busy market. Locals say that most shop owners around are Hindus while the few residential colonies in the area largely house Muslims, most of them migrants from Bihar and west Uttar Pradesh. These days, however, one can see many Muslims with stalls selling Ramzan delicacies like dates and sevayiaan.

Owner of a sweets shop, outside of which the incident took place, says the market closes around 9 pm and thus "nobody knows what happened". Sardar Tanwar, who runs a gifts shop opposite the sweets shop, says some "village buffoons" roam around in the night and they could be behind the incident.

Aman Dua, who runs a grocery stall just opposite the mosque, says Muslims in the area wear skull caps all the time without any trouble. He calls one of his employees who is wearing a skull cap, and asks us to photograph him.

Many shop owners this correspondent spoke to, did not know about the findings in the police probe. 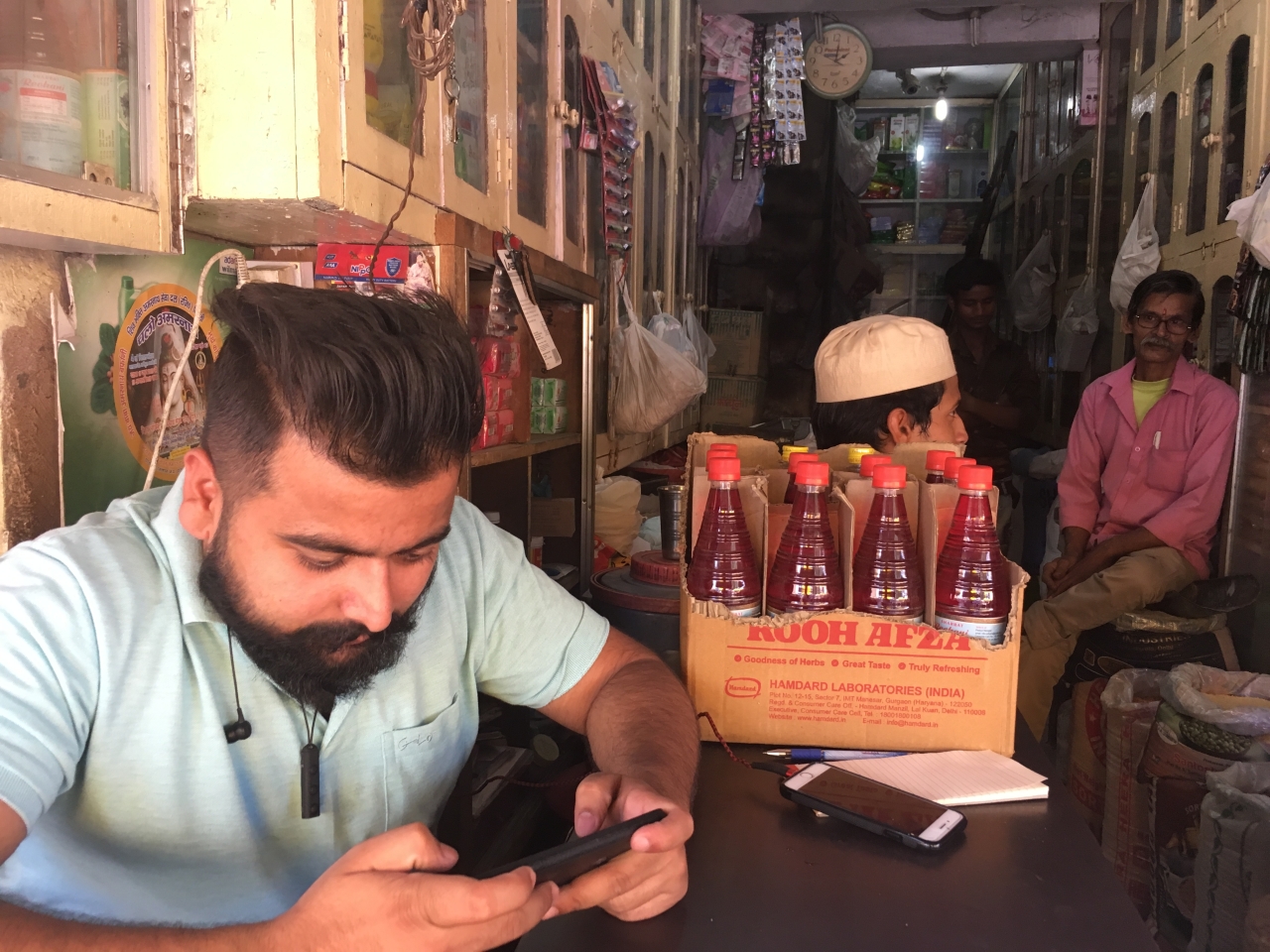 Aman Dua (left) who runs a shop outside Jama Masjid,

While many locals say the mahaul (atmosphere) is very peaceful and they find it hard to believe that such an incident has happened in the area, some Muslim stall owners tell a different story.

Nausheer Ahmed, who sells dates outside the mosque, says that he is not surprised because two similar cases have taken place in the recent past.

"Last year, an elderly man was stopped by a group and asked to say Jai Shri Ram and Vande Mataram. He was thrashed. Even his legs and hands were broken. He was really old. Then another youth was harassed in a similar way," says Ahmed and, in the same breath, adds that the community does not associate this goondaism with any political party like the Shiv Sena, Bajrang Dal or the Bharatiya Janata Party. A stall owner adjoining Ahmed’s stall, who requests not to be named, says he agrees with Ahmed. 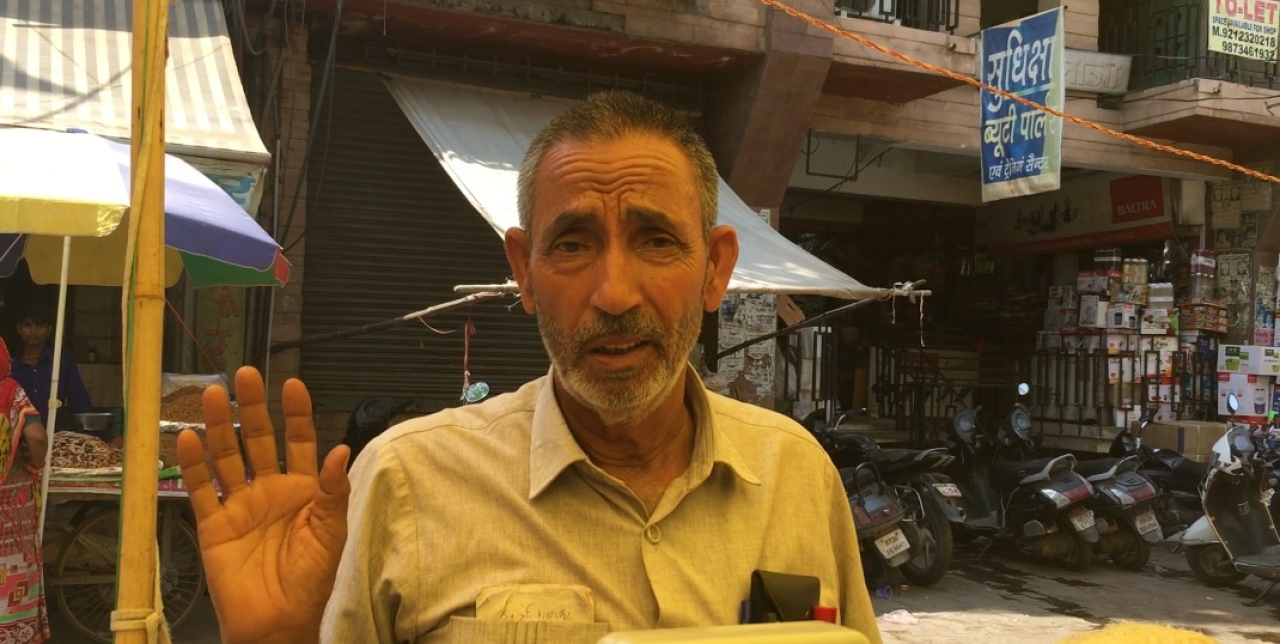 These accounts leave much to be answered. The police may have dismissed Barkat's allegations of being subjected to communal slurs, but the fact remains that with non-availability of audio in the CCTV footage, this cannot be ruled out completely.

However, given the glaring gaps between Barkat's allegations and the footage, one also wonders if he was really tutored as the police suspects.

And was it in Delhi?

Get Swarajya in your inbox everyday. Subscribe here.
Tags:
196 Shares