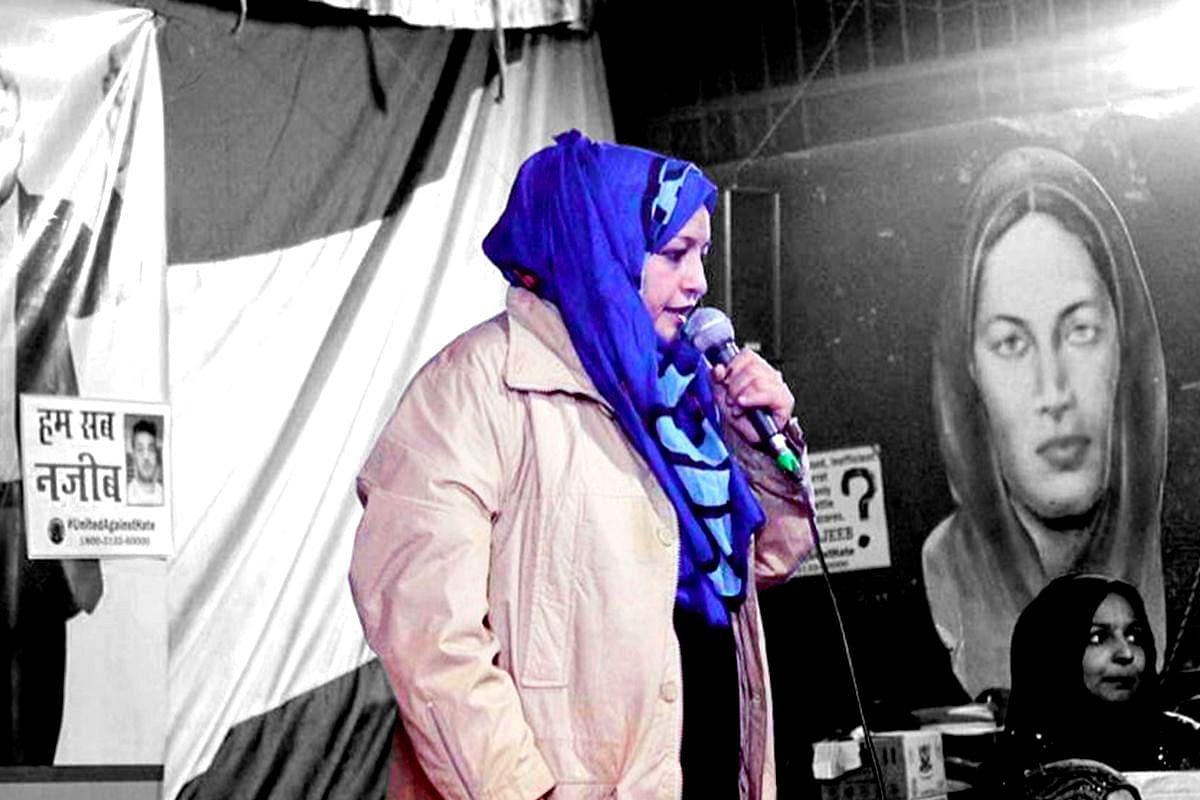 Seema Aiman Rizvi, a Muslim activist, has alleged that she was harassed and heckled at Jamia Milia Islamia (JMI) University by a group of protesters on 4 February. A first information report (FIR) was registered in Jamia Nagar Police Station on 11 February after Rizvi filed a written complaint. A copy of FIR is with Swarajya.

In her complaint, Rizvi has alleged that when she was returning home from the protest site at JMI, she was stopped by some protesters near Jamia mosque at Gate No 7 and was assaulted while being called an agent of Rashtriya Swayamsevak Sangh (RSS) because of some videos she had posted of protesters on her Facebook page.

The protesters dragged her to a room at Gate No 18, locked her inside, threatened to do things to her 10-year-old daughter, pulled her hair and kept assaulting her, Rizvi accuses in the FIR. The Jamia protesters even threatened to get her kidnapped, she says.

“I am not getting out of home out of fear. I even stopped going to the protest site. Only yesterday, I could muster up the courage to visit Jamia again,” Rizvi tells Swarajya.

She is an alumnus of the university and lives in Batla House area of Jamia Nagar. Rizvi says that she is being threatened to rescind her police complaint.

“I have a kidney problem and was returning home after a checkup by my doctor. I stopped at the protest site in front of Jamia and was clicking photos when two girl protesters started shouting at me, calling me ‘RSS ki dalli’. The men protesters joined later and they all took me to a room where they kept me confined for more than a couple of hours,” Rizvi says.

“They were touching me inappropriately, calling me an RSS agent and hurling vile abuses, saying “ye baazaaru hai”, “iski beti ko utha lo” and whatnot. This went on for two hours and I was rescued by some JMI alumni who got to know I was being held like this. JMI staff also came and they freed me from these protesters, took me to the Proctor’s office where Police also came and I filed a written complaint,” Rizvi narrates the ordeal.

Rizvi tells Swarajya that she is being targeted by former Congress MLA Asif Mohammad Khan.

“I believe he has orchestrated this attack on me. His people had confronted me a couple of days before the attack. When I went to Shaheen Bagh, Asif Mohammad Khan forced me to stop. My mic was snatched away. He accused me of being a Pakistani sympathiser and belonging to the Ahmadiyya terrorist group,” she says.

“He calls me traitor and his people accuse me of being an RSS agent but I had simply exposed him saying he was hoodwinking the protesters as his own brother Arif Mohammad Khan is Kerala governor appointed by the BJP,” says Rizvi.

When violence broke out in Jamia in December last year during anti-CAA protests, Khan was named in an FIR by Delhi Police for inciting the riots. The Crime Branch issued summons to him for questioning. He was later released.

Swarajya spoke to a couple of people named in the FIR as identified by Seema Aiman Rizvi.

“I have no knowledge of any complaint against me. I am hearing it for the first time. I had read in one of my WhatsApp groups that such an incident had taken place but I wasn’t even in Delhi on 4 February,” says Saiful Islam, who studies Law at JMI.

Safoora Zargar, a leading student activist actively involved in the protests at Jamia who is also named in the FIR, also tells Swarajya that she wasn’t involved in this incident and was having tea across the road when she heard something of that sort was happening.

“She (Rizvi) is a big liar. Earlier, when an effigy was being burnt at the protest site, she was doing Facebook live and calling me and three other girls ‘RSS ki dalli’. She later apologised that she was being fed wrong information. We have the screenshots of this,” Zargar says.

“On 4 February, there must be 100 people who were witness to all this and they can tell that no one harassed or assaulted her. They have videos to prove this. I don’t know why she keeps doing all this. A couple of students called her out for such acts. Such attempts have been made time and again to delegitimise the protests by the students,” says Zargar.