Harbinger Of An Awakening: How Historian Dharampal Saw The Ram Janmabhoomi Movement 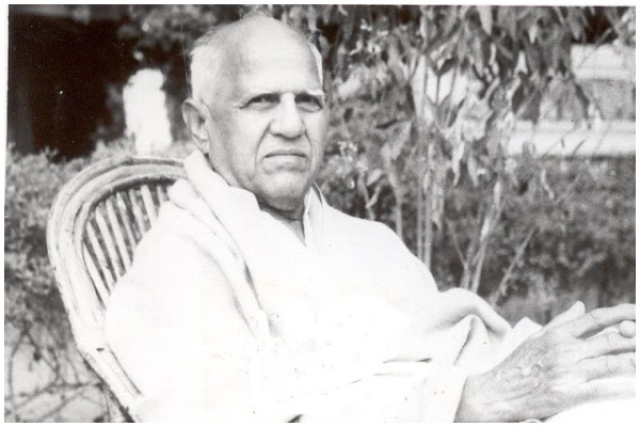 On the 6th of December 1992, karsevaks had waited for more than a year since the Supreme Court had promised the nation a judgement on the Ram Janmabhoomi case.

So, betrayed by the highest court of the land, they decided to destroy the domes atop the then functioning Ram Mandir.

For an ordinary Indian Muslim, the establishment press and Marxist historians had created an impression that what was destroyed was indeed a mosque.

They had also created an impression, quite contrary to the reality, that the Hindu side relied on ‘myths’ and not on facts.

In truth, the Hindu side had brought in enough empirical evidence, historical, archaeological and literary, to prove that the temple was there and was destroyed by an invader.

So, for an average Indian Muslim who was led led to believe that it was a mosque indeed that was destroyed, it should have been traumatic.

That was exactly what was intended. Soon, trauma would give into rage and riots and bomb blasts across India.

And let it be clear the blood of innocent Hindus and Muslims killed in those riots, rests squarely on the hands of those propagandists who led the Muslims to believe that there was no evidence for temple in Ayodhya and that what was destroyed was indeed a mosque.

It was under such a chaotic scenario that the, ‘Centre for Policy Studies’ (CPS), in Chennai (then Madras), decided to bring in some of the best minds from across the ideological and religious spectrum and have them talk it out.

They were joined by Dharampal the pioneering historian and Gandhian.

There were serious discussions and dialogues. After listening intently to all the discussions, Dharampal that grand old man who initiated a paradigm shift in viewing and writing Indian history, started to talk.

Here are a few excerpts from what he said then, which is relevant even today.

Then there was a big rumour and accusation that there was actually a conspiracy to destroy the structure and it was all well planned. Dharampal took up this and said

...But either because of a conspiracy or because of the initiative of the people the structure crumbled. They demolished the structure. And when they demolished it, and when I read about it next morning or perhaps heard about it from somebody, I really did feel relieved. My feeling is that most of the people sitting here also would have felt relieved. There are of course, people here who are secular, who are not affected by the BJP or the RSS etc. But even they I believe would have felt relieved in a way. ... Later, of course, people had to strike different poses, they had to adopt public postures. ... But supposing the structure  were not demolished, what would have happened? The frustration that it would have generated around the country would have been unbearable.

Then he narrated the incident of Mahatma Gandhi visiting the temple at Gulbarga desecrated by Islamsists in 1924. Dharampal read out the passage where Gandhi said that he would be ‘untrue’ to his creed of being ‘a believing and Satyagrahi Hindu’ if he hid his feeling at the desecrated temple.

... When I went into the temple I was shown the spot where the idol was removed and the Nandi was desecrated. I tell you the sight pained me. You may call me an idolater if you will. ....

(Talking about Nandis incidentally this writer remembers a small boy aged 11 asking him looking at a Nandi idol in a South Indian temple which was decapitated during a Sultanate invasion, ‘Why would anyone come all the way from Delhi to decapitate such a beautiful Nandi?’ The pain, that the boy felt looking at the Nandi centuries old and the pain that Gandhi felt both come from the same heartbeats of the Hindu nation.)

In the same speech, he also talked about Andhra women fighting against liquor and then concluded:

My feeling is that these women in Andhra who are agitating against attack, and also the people who assembled in Ayodhya on the 6th of December 1992, and many other people who are now stirring themselves to take care of many other things, are harbingers of something.  If what they are doing, and what they have done, reflects their innermost feelings - rational or irrational, reasonable or unreasonable - then there is a chance that we would be on the road to recovery and to a different polity. Otherwise we would keep stumbling along.

Dharampal captured the core of the problem.

Ayodhya represents a nation that is older, more dimensional than the modern state of India.

With such an ancient soul, the new body which contains it should have demonstrated more civilisational wisdom. Unfortunately, we can only wish Nehru had that. So it created its own problems that have been proliferating.

The mechanistic systems that made the Indian state could not comprehend it. Those who comprehended what was actually happening were ironically the anti-Hindu forces. They saw it for what it is - the reawakening of India. So they attacked it and attached to it all kinds of negativity in their propaganda. But India of the ages had awakened.

Later their bloated bodies with sand bags hooked to their thighs were pulled out of river Sarayu. But for these sacrifices and Ayodhya movement we would not be having a Prime Minister who does aarati at Varanasi.

From 2014 onward Modi faced the greater battle. He has to build the Ram temple but he also should make sure that the state of India is healed and harmonised with the soul of Bharat.

That was what Dharampal had been reinforcing again and again in his talk and interaction sessions at Madras dialogue of 1993.

The present Government by being calm and allowing the Supreme Court to deal with the Ram Janmabhoomi issue actually allowed the Indian state to redeem itself from the artificial divide it had created between itself and the heart of the nation that is Bharat.

This was a historical opportunity for the Indian state to at last overcome the abyss that it had created.

And the state did redeem itself.

Reference: Ayodhya and the Future of India (Ed, by Jitendra Bajaj), Centre for Policy Studies, Madras, 1993.