Haryana Congress Manifesto: A Vision-less Document That Will Bankrupt The Treasury And Ruin The State 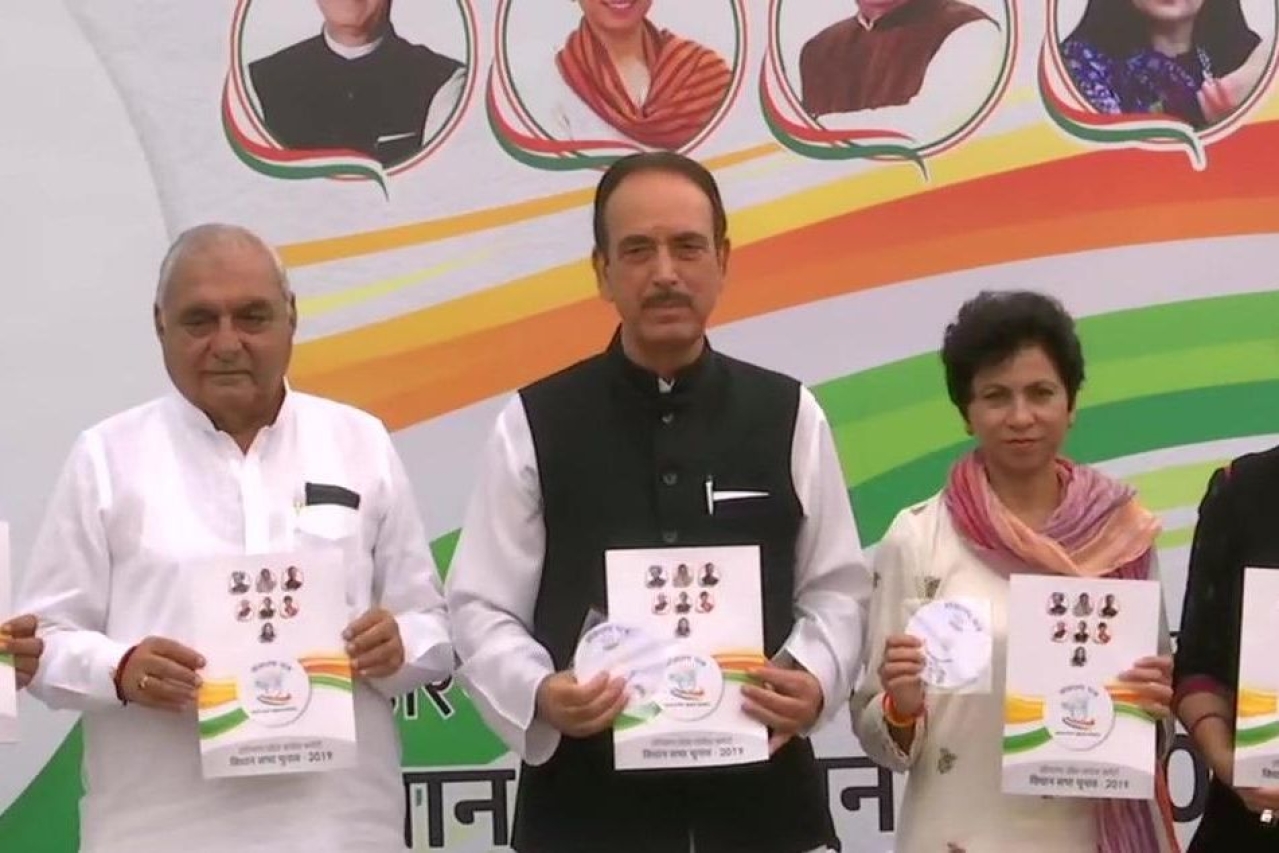 As the winter is setting in slowly, the politics is keeping the atmosphere heated in Haryana. The state goes to polls on 21 October. And parties have only now started releasing their manifestos.

The first one to come out is that of the Congress party, which released its ‘sankalp patra’ on Friday (11 October).

The use of the term ‘sankalp patra’ by the Congress state unit is interesting — it is what the Bharatiya Janata Party (BJP) has been terming its manifestos for some time now. And this saffronisation — replacing the word ‘manifesto’ with ‘sankalp patra’ — is perhaps the only good thing about the document, which otherwise is a reflection of the bankruptcy of vision that pervades the Congress leadership.

In making reckless and unrealistic promises, the Haryana Congress seems to have taken a leaf out of the playbook that delivered the party victories in Rajasthan, Madhya Pradesh and Chhattisgarh.

But almost a year later, these state governments are yet to honour the commitments to most of the things they pledged to deliver for the people in their manifestoes.

No wonder then that these states gave 62 out of 65 seats to the BJP in the General Elections, held only five months after the assembly polls brought the Congress to power.

The Haryana Congress’ manifesto is not just a manifestation of the bankruptcy of vision of the party’s brain trust but it is also guaranteed to bankrupt the state’s treasury if implemented.

Let’s start with the farmers. Congress is promising to waive farm loans within 24 hours of coming to power, including that of the landless farmers. This amount is slightly above Rs 50,000 crore as of 30 June.

Haryana’s total budget for 2019-20 is around Rs 1.3 lakh crore. Allocating almost 40 per cent of this budget only to waiving farm loans is either utter dishonesty or height of recklessness. On top of this, the government will pay crop insurance premium for the farmers.

The Congress is also promising to open special schools on the lines of Navodaya Schools in each tehsil (there are 93 tehsils in Haryana).

The value of the current universities in Haryana is pathetic, to say the least, considering they churn out mostly unemployable graduates.

The state government currently runs a similar scheme where graduates are given Rs 1,500 per month and postgraduates Rs 3,000 per month. The budget for this is around Rs 350 crores.

Since the allowance will go up by more than four times for the former and more than three times for the latter, we can extrapolate that the budget for this scheme as mentioned in the Congress manifesto will be north of Rs 1,200 crore. But that’s not the worst part.

The damage such doles will do to the job market will be immense. Already the situation of private industry is bad enough in Haryana.

If graduates can get Rs 7,000–Rs 10,000 sitting at home in their villages, they wouldn’t bother taking up jobs for Rs 20,000 per month, in say, Gurgaon or Delhi because the living and travelling costs would mean that staying at home would be much more beneficial — not to speak of avoiding all the hard work.

So, who will work in the private sector especially in Haryana when our own government is incentivising sitting at home? Only the outsiders will benefit. And here the Congress has a terrible solution to avoid such a situation.

It promises that it will force all private companies to hire at least 75 per cent of their workforce from within the state. Now, these companies will have to raise the salaries considerably to get Haryanvis to work given the fat unemployment allowance they will get if they refuse the jobs.

Or the companies can simply decide to leave Haryana. Gurgaon firms can easily decide to move their base to Noida.

While the subsidies will bankrupt our finances, such policies will drastically cut down our tax collection and revenue, dealing a double blow to the state treasury.

Next, the Congress manifesto says its government will hire 50,000 safai karamcharis. There is no doubt that every state needs more workforce in the sanitation department.

However, at a time when we are moving towards a future where robots will be acting as sweepers and cleaning sewage, this focus on hiring more people to do menial jobs points towards outdated thinking and the only objective appears to be to garner votes in the name of giving more sarkari jobs.

The Congress is also promising to open free tuition and coaching centres in around 6,000 villages of the state. Given its tremendous success in running schools, one can only marvel at the confidence of these manifesto makers.

The state unit promises to make travel free for all women and old folks in government-run buses. This, when the government’s bus transport corporation is running at a loss, primarily due to exemptions already given to certain categories of passengers. The Congress party perhaps wants to push the corporation further into debt.

For women, the manifesto says, the government will reserve 33 per cent seats in all government jobs. Even if we don’t scrutinise this on whether it is at all constitutional, it is certainly nonsensical.

In professions like teaching and nursing, women clearly outnumber men. Should we reserve a certain percentage of seats for men here? How will this new quota fit within the quota for SCs and backward castes?

This is what happens when promises are made based on their vote-catching abilities rather than on sound principles or based on if they are even practical to implement.

That’s not all. Congress manifesto says its government will pay every pregnant woman Rs 3,500 per month until the child is born and Rs 5,000 after giving birth, i.e., Rs 60,000 a year for five years. The estimated amount needed for this scheme will be upwards of Rs 10,000 crore as per some experts.

On top of all this, there is a promise of free electricity for all up to 300 units a month and a reduction in power cost by half for those using over 300 units. This when the Khattar government has already cut power costs by half and made it one of the lowest in the country.

Moreover, the Khattar government was able to do it after initiating reforms in metering and putting a stop to power theft, enabling the state DISCOMS to become profitable for the first time in years.

Congress also wants to extend the Delhi metro line up to Nuh from Gurgaon, up to Sonipat from Rithala (forget the fact that extending it up to even Narela in Delhi is seen as unviable), up to Rewari from Manesar (metro is not even built up to Manesar yet) and up to Rohtak from Bahadurgarh (when there is only so much traffic from Bahadurgarh that the metro service runs every 8 minutes rather than the normal two minutes everywhere else).

Then there is the most whacky promise of all: to increase old-age pension from Rs 2,000 per month at present to Rs 5,100 per month. We don’t even have money to give Rs 5,000 per month to our youth — whether employed or unemployed — but yes, let’s throw the money at old people for whom even Rs 2,000 per month is more than enough.

Not only that, Congress even wants to reduce the old-age pension age for women from 60 to 55. That’s another few hundred crores down the drain.

Money certainly grows on trees if the Congress manifesto makers are to be believed.

The only thing that Haryana Congress forgot to promise is the moon. They could’ve very well done so for it would’ve been taken as seriously as people are taking these promises.

The silver lining here is this: these promises won’t be implemented because the Congress won’t even win one-third of the majority needed to form the government.