Haryana Elections: Ashok Tanwar’s Anger With Congress May Be Justified But He Is Digging His Own Grave 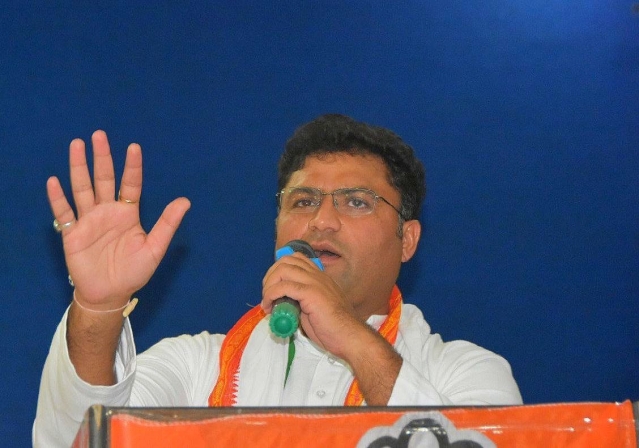 A couple of months is a long time in politics.

Two months ago, Ashok Tanwar was Haryana Congress president while his bete noire and former Chief Minister Bhupinder Hooda seemed to be on the verge of quitting the party.

Today, Tanwar has resigned from the Congress party while Hooda is de facto CM candidate of the party for the upcoming polls and has successfully managed to distribute tickets among his loyalists.

On 18 August, when Hooda organised a big rally in Rohtak, it appeared to be his first step towards quitting Congress. It looked as if he was burning all the bridges with his rebellious tone and not-so-veiled attack on the party high command by declaring that Congress had lost its way and it was not the same party it used to be in the past.

His support to the BJP government on the abrogation of Article 370 was in direct opposition to the narrative lapped up by the Central party leadership.

Hooda formed a committee of sitting and ex-Congress MLAs to decide on his future course of action. His exit seemed imminent. Those were, of course, warning salvos Hooda was firing. But his antics worked.

Seeing that Hooda had the support of most sitting Congress MLAs and if not placated, Congress in Haryana will be consigned to irrelevance, Sonia Gandhi, with cajoling from Ahmed Patel and Ghulam Nabi Azad, relented. Hooda also mellowed down.

Since Tanwar hails from one of the Scheduled Castes (SC), he was replaced by Kumari Selja, also an SC. The latter, who is undoubtedly a more popular SC leader than the former, in addition to being a veteran who is close to Sonia Gandhi, was Cabinet Minister in the Manmohan Singh government and her father was also a Congressman.

On the other hand, Tanwar rose through the ranks starting with college politics as a member of National Students Union of India (NSUI), Congress party’s national student body. He entered the infamous Jawaharlal Nehru University in 1997 and studied there. Later, he became president of the Indian Youth Congress.

In 2009, he was projected as Rahul Gandhi’s personally handpicked candidate and given a ticket from SC reserved constituency of Sirsa in Haryana.

He was being groomed for Delhi politics but when things didn’t become favourable there, he was sent to Haryana in 2009 as Rahul’s candidate to fight the Lok Sabha election from Sirsa.”

That was an easy election to win. In the run up to the 2014 Lok Sabha polls, he was elected as party state unit president. Since then, Haryana Congress has been bitterly divided between the Hooda and Tanwar camps. Meanwhile, Tanwar lost badly in both the 2014 and 2019 Lok Sabha polls.

The Hooda camp has always portrayed Tanwar as someone who is imposed on the state unit from Delhi and doesn’t have any support base of his own.

Of course, it couldn’t have been easy for Hooda, who became Haryana’s Chief Minister when Tanwar was still in youth politics, to accept the latter as his boss. That’s why Tanwar found his authority challenged at every step.

For the past five years, both sides have been locked in a bitter struggle for control over the state party unit. Tanwar had Rahul Gandhi’s backing while Hooda had a large constituency and an array of sitting and former MLAs who he had nurtured during his chief ministership. In the end, the party high command has given in to popularity.

While such political feuds are common in all parties, some vanquished leaders are astute enough to take it on the chin and live to fight another day. The wise ones know that political fortunes can change overnight. Tanwar should’ve certainly learnt from this humbling experience. But he is committing harakiri.

First, he alleged that the party sold tickets for the upcoming elections in exchange for money. This was an obvious attack on Hooda who is in charge of ticket distribution.

Second, he said that ‘numerous conspiracies are being hatched to eliminate those young leaders who have been groomed by Rahul Gandhi in the last one-and-a-half decade’. This was directed at senior leaders of Congress like Ghulam Nabi Azad and Ahmed Patel who are close to Sonia Gandhi.

Tanwar accused Azad of ‘selling out his responsibility of being the High Command’s eyes and ears by submitting entirely to the might of his friends’ (reference to Hoodas). The use of the word ‘sell out’ and its literal meaning is not to be missed here.

Third, he said that hard working Congressmen who ‘rise from the grassroots and belong to non-political and humble family backgrounds are not valued’ and instead, the party responds to money, blackmail and pressure tactics. He also alleged that he was not the only victim of dynastic politics, which is omnipresent in Congress.

One can understand where Tanwar is coming from and his frustration is also understandable. But by issuing these statements in anger and hurry, he has shown immaturity which has not only all but finished his career in the Congress but also closed many doors that could’ve opened in other parties.

Seeing such confrontational tendencies, they too would be hesitant to take him in.

Chief Minister Manohar Lal has already put ‘No entry in BJP’ board for Tanwar. This when the party has taken in scores of leaders from other parties in the past couple of months alone. Local parties such as JJP and INLD are also saying that Tanwar is welcome to join them but nothing beyond that.

Tanwar could’ve waited for his turn. The BJP is all set to return with a thumping majority. Hooda, who is in full control of the Congress campaign, would have been held responsible for the trouncing that awaits the party on 20 October.

Tanwar could’ve had his ‘I-told-you-so’ moment. But in a tearing hurry, and using crude language, revealing party secrets which will cause great harm, he has dug his own political grave.