Haryana Polls 2019: A Minor Setback For BJP, But No Major Victory For Congress 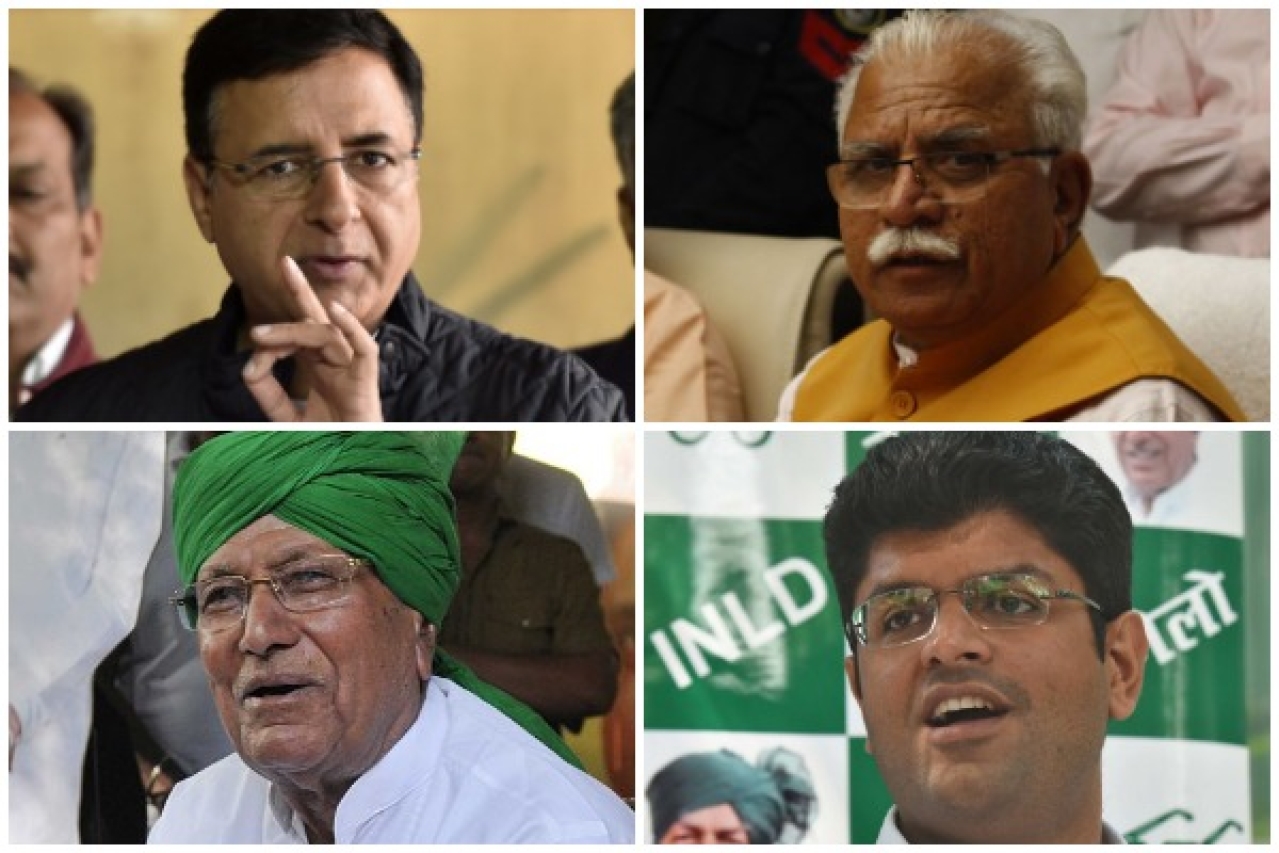 According to the Indian commentariat, the broad takeaways of the recent Assembly elections in Haryana include the following:

· The ruling Bharatiya Janata Party (BJP) lost seven seats, and a simple majority, from what they garnered in 2014.

· From clocking 58 per cent of the vote share in the May 2019 general elections, the BJP suffered a 22 per cent negative vote swing in the October 2019 Assembly elections.

· The Indian National Lok Dal (INLD), a Jat-dominated party of the late Devi Lal’s family, and a traditional political force in the state, has been wiped out.

· The Jat vote, which moved in bulk to the BJP in May 2019, has now deserted it en masse, in roughly equal parts, to the Congress, and to a new political formation, the JJP (Jananayak Janata Party) led by Dushyant Chautala, a Devi Lal scion.

· The Modi-Shah electoral juggernaut has been stopped in its tracks

By this reasoning, the Congress party swiftly declared the results as a moral victory for themselves, even if they were in no realistic position of forming a stable government.

However, an in-depth analysis of the numbers reveals two points: first, while there is no argument over the setbacks suffered by the BJP, one would be hard pressed to agree that the Haryana results are in any way, a moral victory for the Congress.

And second, as Arihant Pawariya too has written, simply too much is being made of the Jat-factor[1]. Indeed, inferences detailed below point on the contrary, to a very interesting churning.

But first, the numbers: 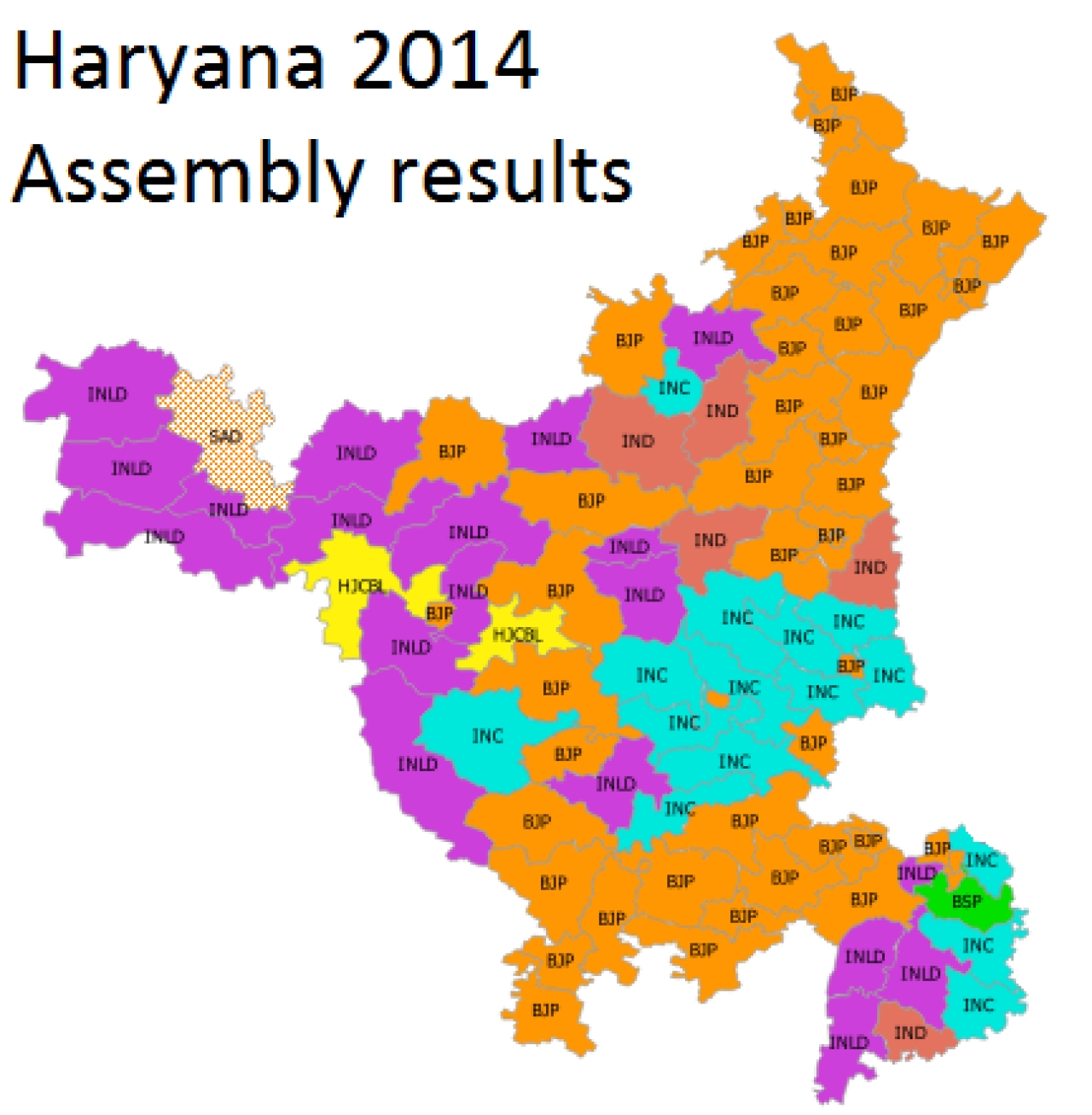 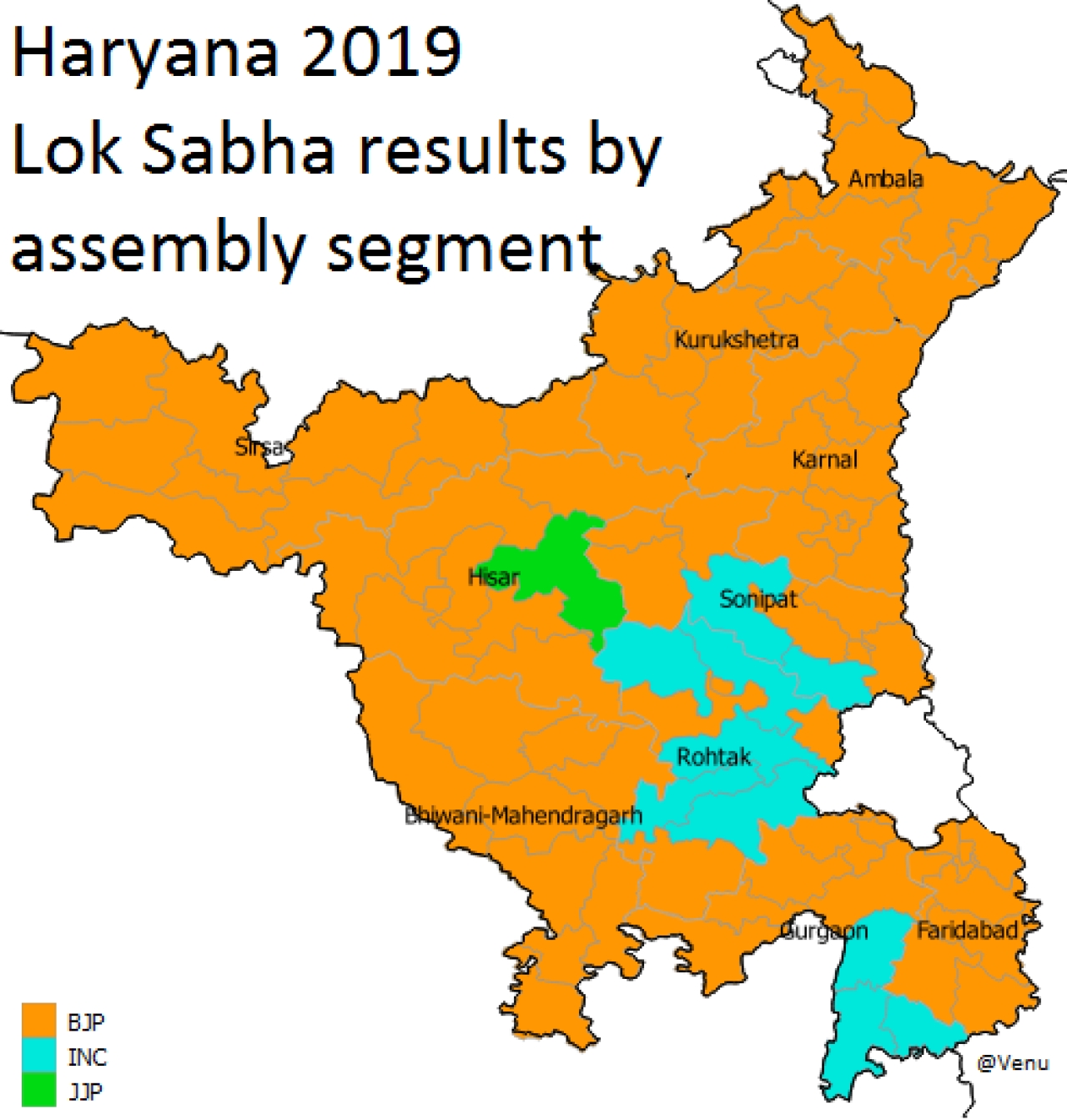 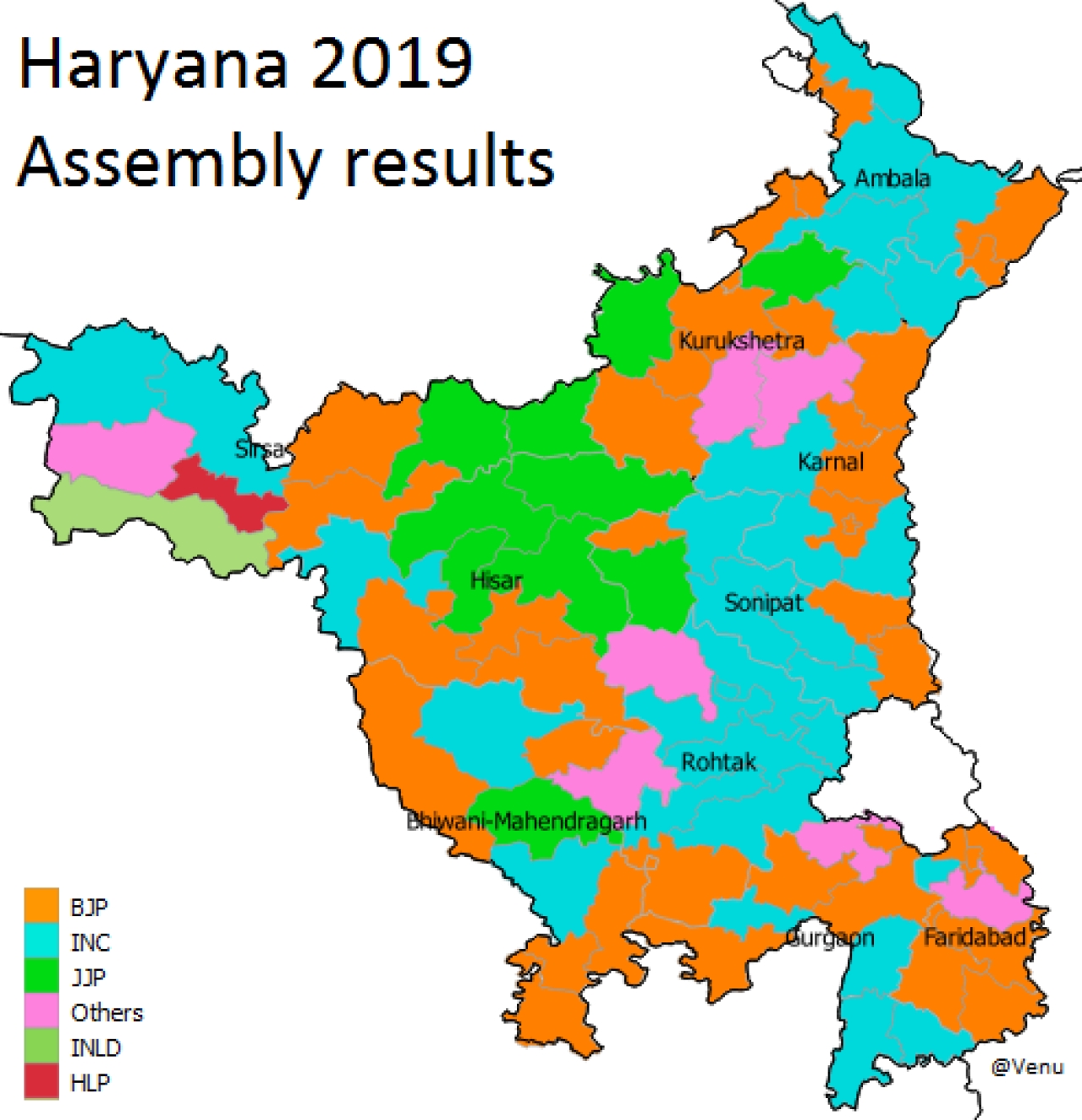 Unfortunately, the mismatch between vote shifts and seat shifts makes no sense, since one expects such correlations to normally be linear. For example, though the BJP’s vote share went up by 3 per cent, it lost seven seats.

To better understand such incongruities, let us look at the party-wise gains and losses. This is the overall table:

Readers may note that the JJP and the INLD have been clubbed together in these gain/loss calculations, to represent the continuation of the Devi Lal legacy (which both parties in reality are). For this reason, a vote/seat switch from the INLD to the JJP is treated as a hold. Broadly speaking, they are but different parts of the same ‘identity grouping’, capitalising on family name, personality, history, and roughly the same vote base.

Now, the actual inter-party dynamics (and the underlying voter demographics) become more apparent when we analyse seat gains and losses on an individual party basis:

And one last table, for hold percentages (meaning, the percentage of seats retained from the previous election in 2014, out of the total won in 2019):

The following gain-loss maps highlight the geographical and demographic significances of these results: 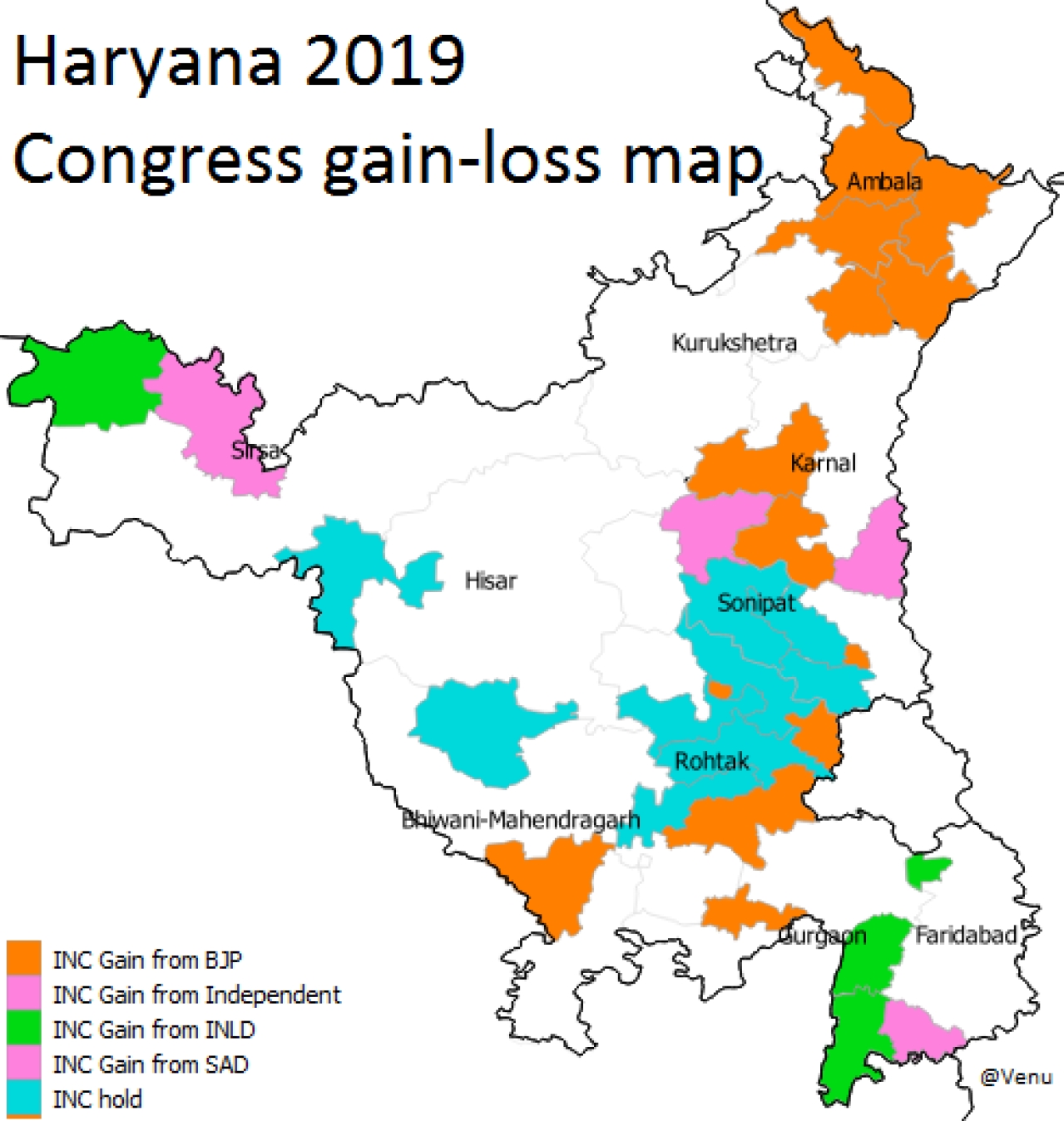 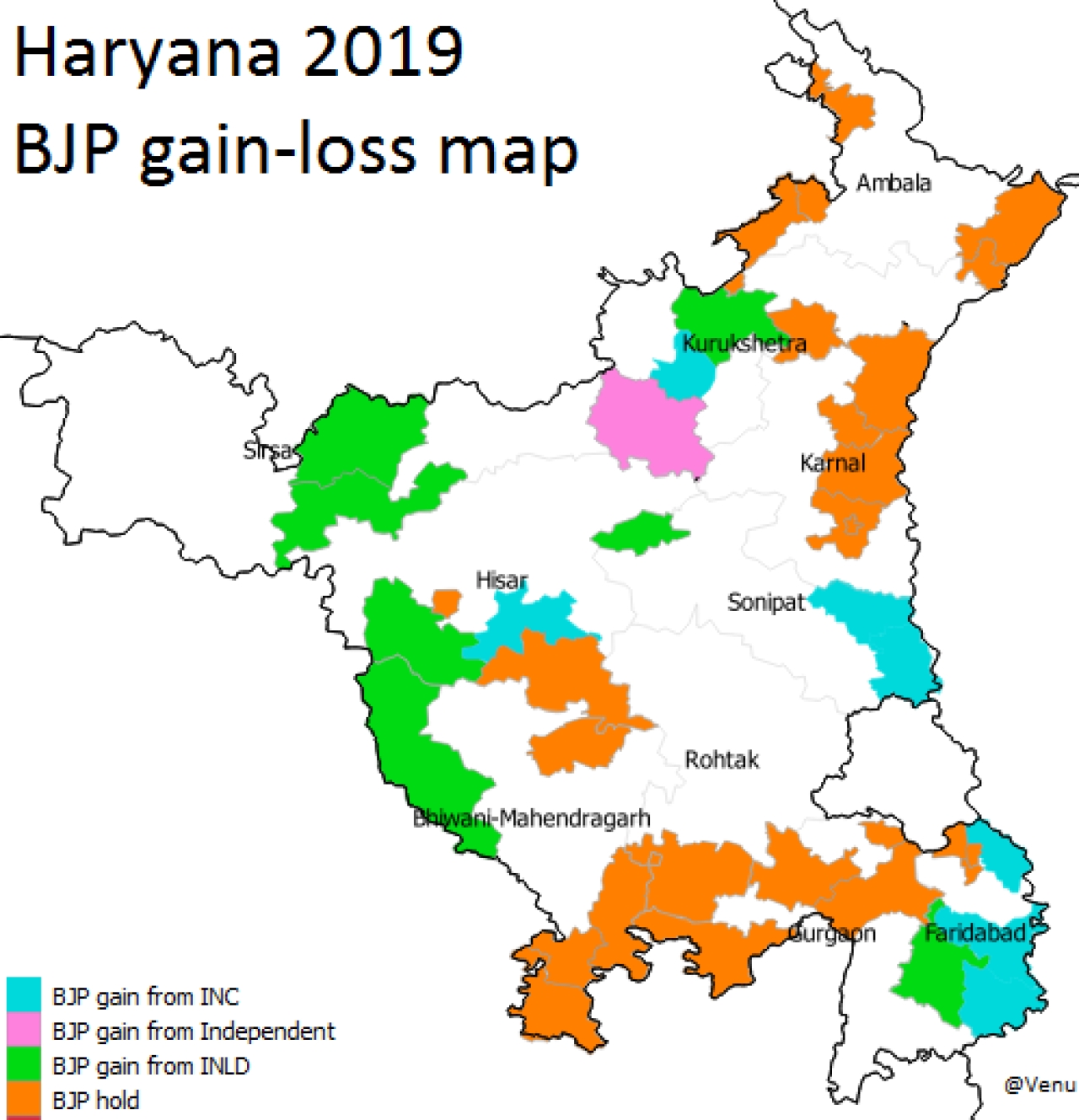 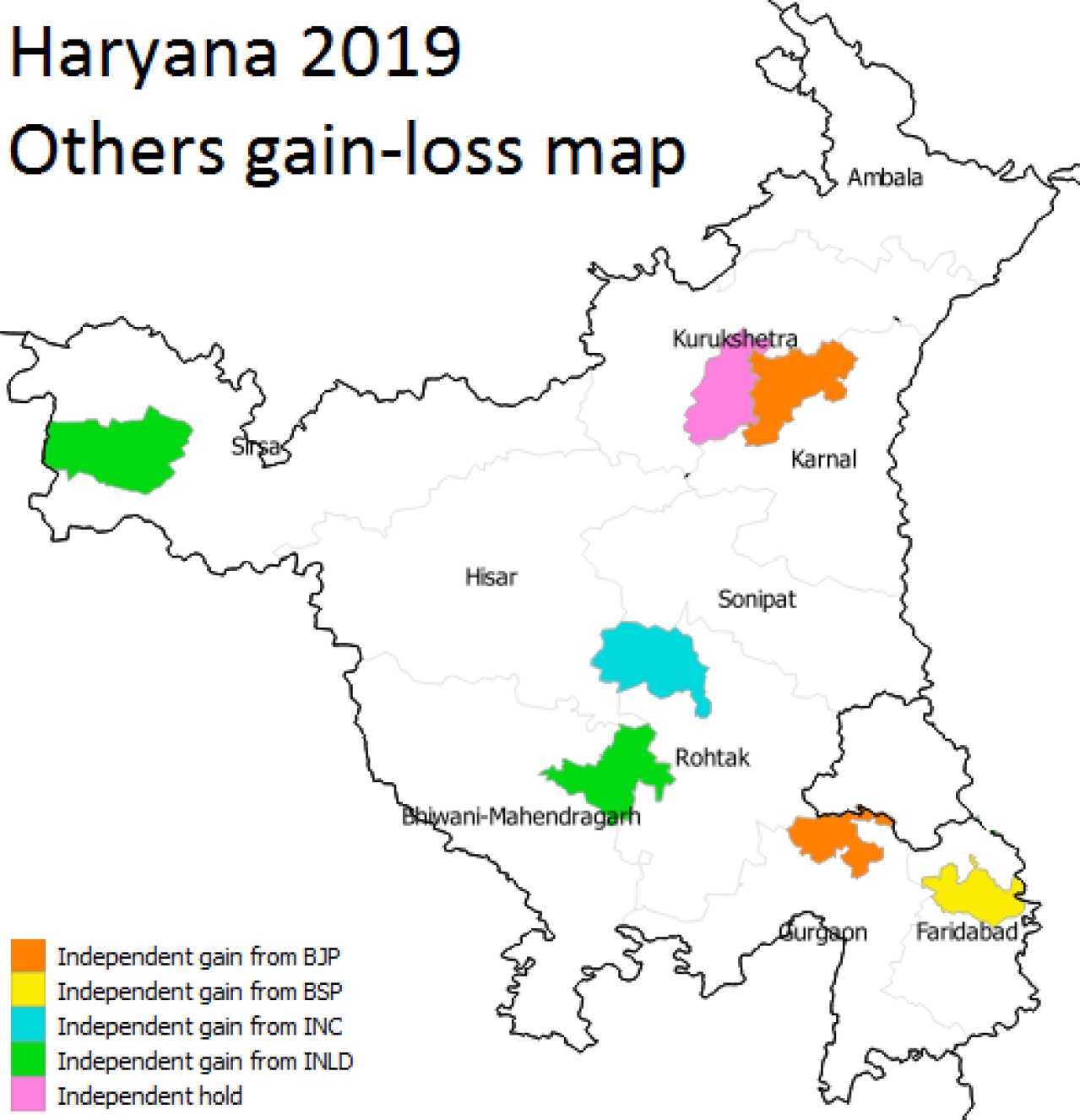 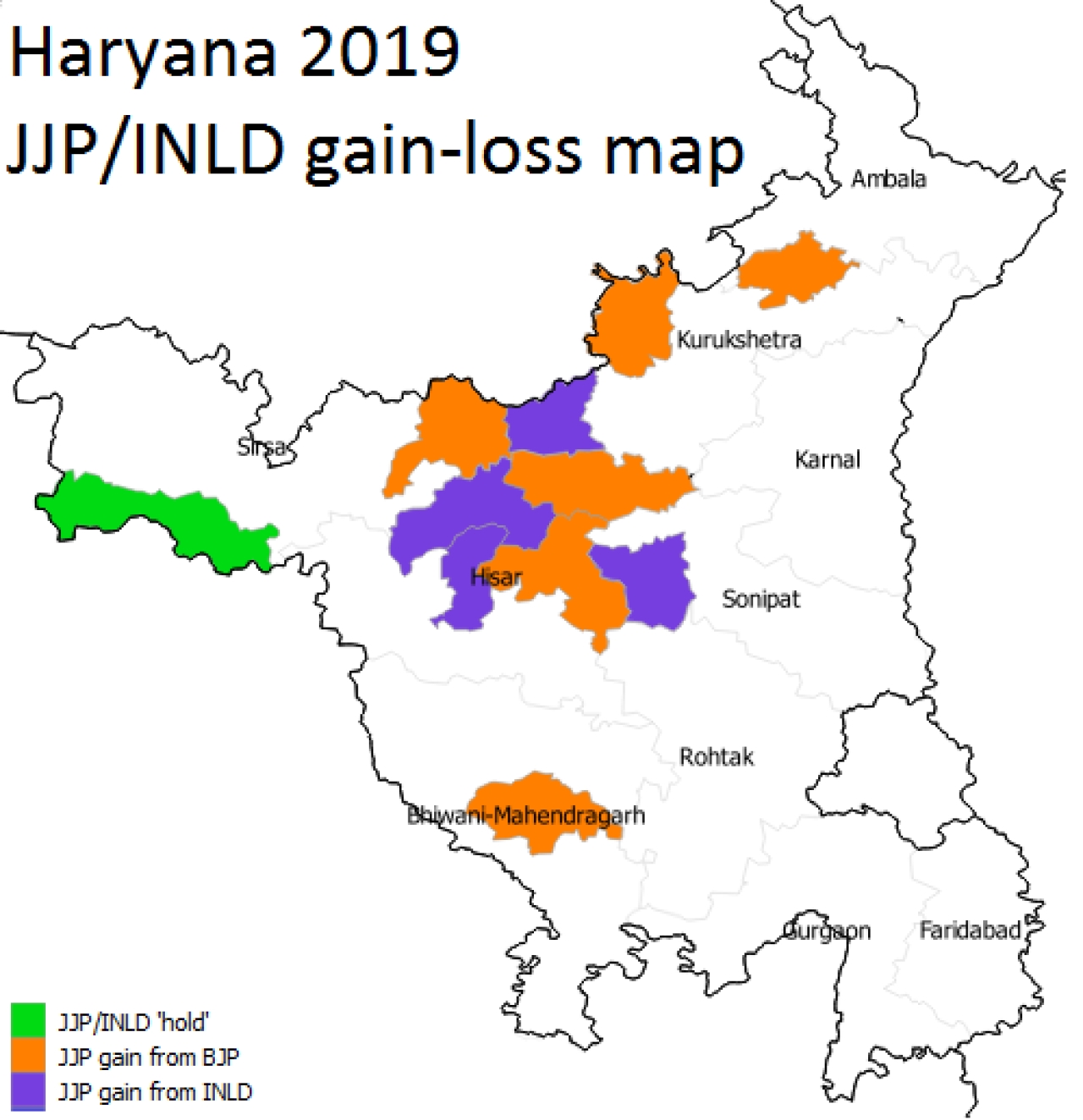 • The Congress gained 14 seats from the BJP, but lost seven in return.

• The Congress gained four seats from the INLD without losing any to the JJP.

• All JJP gains (as in, those seats they didn’t take from the INLD) are from the BJP, and none from either the Congress or others.

• The BJP in turn, gained more from the INLD than it lost to the JJP.

• BJP has by far the highest hold percentage

• The BJP was involved in 12 of the 15 closest contests, where the victory margin was under 3,000 votes. They lost six and won six.

• A continued, gradual, rising trend, of citizens voting above traditional caste and faith lines, is noted.

• This electoral verdict is a confusing jumble of the Jat vote in heavy flux, an element of anti-incumbency, and some continued, amalgamative Modi magic. Consequently, analysts are better off as ‘Blind men of Hindoostan’ for now, rather than risking a diet of humble pie, by making authoritative-but-evanescent statements (as this writer nearly did !).

• Devi Lal’s legacy has been greatly eroded, but it retains electoral significance in the new garb of the JJP. This demonstrates that the doctrine of lapse is not yet permitted in Haryana. However, the JJP’s decision to enter into a post-poll alliance with the BJP may, in all probability, erode this legacy further with time.

• The BJP has expanded into more Jat-dominated areas, while losing more seats in areas where the Jats are not as predominant. This is contradictory to the prevailing inductive-reasoning narrative that the BJP lost because the Jat vote deserted it.

• The majority of the Muslim vote in Mewat District has shifted from the INLD to the Congress. Yet demonstrably, a significant portion has now shifted to the BJP. In Nuh seat, for example, a Muslim BJP candidate (formerly a sitting INLD MLA), lost by just 4,038 votes to the Congress, in an area where the Muslim population is over 80 per cent.

• Six of the 10 JJP candidates won by defeating sitting BJP MLAs. Their entry into a coalition with the BJP, now, could mean that the BJP views this apparent, current compromise as a future opportunity.

• The Congress gained half a dozen seats from the BJP in the Ambala region. Is this decisive swing a reflection in some part, of the passing away of Sushma Swaraj?

• The high hold percentage the BJP achieved shows that its core vote base remains largely intact.

• The total absence of Sonia Gandhi from the campaign (she held no rallies), and the near-absence of Rahul and Priyanka Gandhi, point to a shift in the Congress party’s workings.

Gestalt interpretations, seeking to show that the whole is somehow greater than its constituent parts, are unsuited to current Haryana electoral analytics. Instead, hats off to the Haryana voters, who demonstrated in no uncertain terms, that they stand firmly with the BJP on national issues, and with themselves, on local matters. That is precisely how it should be: a general election is an opportunity for an individual to voice a thought on which direction the nation should take; a provincial election is an opportunity for people to demand what they want.

Get Swarajya in your inbox everyday. Subscribe here.
Tags:
81 Shares