Has The BJP Diluted Brand NaMo? 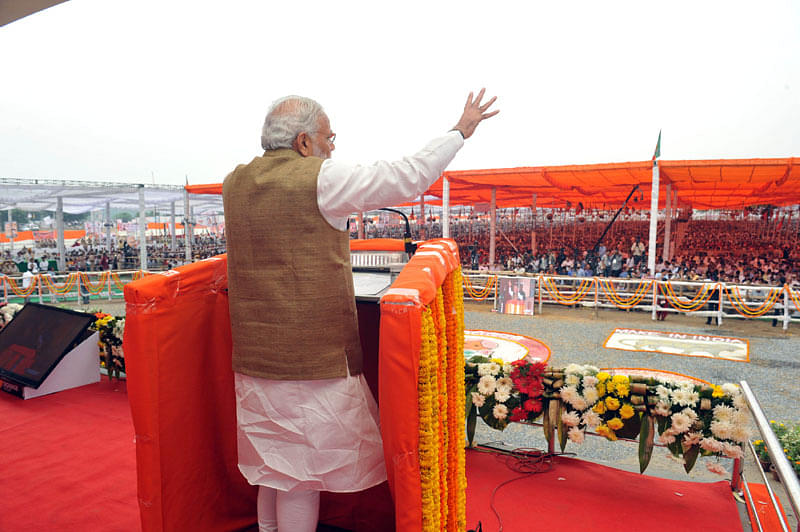 Of the 1600 chairs put up by the organizers nearly a quarter had remained empty, so the desperate local BJP leaders had to rush to a nearby slum in order to somehow convince the people there to come and be a part of the “function”. Since most men in that slum were out for work, the women folk were the ones available for occupying the chairs. But the they demanded their pound of flesh; they wanted “Modi to grant legal status to their illegal slum”!

The rest of the story is quite mundane as the politician made his ‘promise’ and was able to get some 200 odd women to occupy the empty chairs while Union Minister for Rural Development, Chaudhary Birender Singh (the grandson of Sir Chhotu Ram, the first Stephanian to be knighted by the British government), addressed the small gathering on Haryana day this November 1st in Sirsa. To his credit, Chaudhary Ji realized that the crowd was restive and gave a small speech which essentially highlighted the need to build the party in the Jatland. After his speech was over, the women once again asked the organizers to pass on their demand to PM Modi.

On the same day, Abhay Chautala, the leader of the opposition in the Haryana assembly, addressed a huge gathering of slogan shouting, chest thumping Jats in Rohtak (accompanying him on the stage were the deputy CM of neighbouring Punjab, Sukhbir Singh Badal, a supposed all weather NDA ally and K.C. Tyagi of the JDU, a former ally turned bitter foe of the NDA). Chautala egged on the Jats not to pay their electricity bills till Modi – a euphemism for the government – “withdraws the hike in tariff” only to get wild cheers from the audience. Then he went on to make an even more populist promise (to an even louder cheer) of providing a 10% reservation by creating a ‘Special Category’ in the OBC list for five communities – Jats, Bishnois, Jat Sikhs, Rors and Tyagis – if the INLD were to be voted to power.

The man at the centre of all these demands and expectations and accusations and frustrations of different sets of people, Prime Minister Modi, was himself busy throughout the day campaigning in the other side of north India —in Seemanchal, Bihar. He was trying desperately to change the narrative on reservations by counter-accusing the opposition of trying to steal a section of OBC quota.

In Bihar there are 1.41 crore young voters in the age group of 18-29 who are dependent on quotas for any hope to get some education or a job beyond the barely sustainable agrarian sector. These young backward and Dalit voters were suddenly scared into believing that their quotas would be in danger if BJP were to come to power, just a few days before the state went to polls. BJP simply failed to read the young voters’ anxieties in time until finally the Prime Minister had to himself step in to address these concerns directly.

In fact, the PM addressed an unprecedented 40 rallies in Bihar this winter to take BJP’s campaign to every nook and corner of the state. The entire saffron strategy was aligned to this top-down approach of Modi addressing the voters directly to convey the message – a strategy that had worked brilliantly during 2014. What is happening now is that the PM, a leader who is supposed to govern a vast country with nearly 1.3 Cr population, is expected to micro-address the concerns of every small nukkad in India.

Media and the Dilli-centric intelligentsia want Modi to not only condemn but also apologize on behalf of Hindus for an act of crime in a village in Uttar Pradesh (currently under an SP government) because they believe Dadri is important to their ideologies.

Slum women in Sirsa want Modi to regularize their illegal make-shift dwellings because it is important to their geographic survival.

Housewives in Lucknow want Modi to clear all the garbage in front of their house because they believe Swachh Bharat was a campaign designed to keep their neighborhoods clean and it is failing big time.

Young Dalit college students in Begusarai want Modi to address not only their concerns about Mohan Bhagwat’s ill-timed statement on reservations but also provide a clear roadmap as to when would they get reservations in the private sector (private sector reservations could well emerge as the biggest political demand after Mandal in the next few years as the glimpses in Bihar campaign suggest).

This is North India from Sirsa in west to Bhagalpur in east and all the geographic expanse in between where ordinary voters have defined their own personal pursuits as targets for Modi to achieve. This is north India where BJP won nearly 60% of its mandate of 2014 and will face the real anti-incumbency some 3 and a half years from now. Brand NaMo is slowly but surely getting diluted here because of trivial vagaries of everyday life (no, not just the 200 rupees’ dal or 80 rupees’ onion but way beyond that). Yet, one cannot blame the voters alone for this trivialization because the BJP and Modi also seem to have made the classic mistake of over-leveraging a brand in a fast saturating market.

After the hectic 2014 campaign, the PM has addressed nearly a hundred election rallies in the last year and a half. Not only that, he constantly speaks about every minor municipal election victory from Madhya Pradesh to Leh Ladakh. BJP does not hesitate one bit to use Modi as the sole face of the campaign even for BBMP elections. So why shouldn’t a voter in Bangalore want to complain about the non-disposal of garbage in front of their home in Jayanagar (one of Asia’s biggest middle class colonies in Bangalore), for they have voted for Modi rather than the local corporator for all purposes and intents?

Brand NaMo needs to be reinvented and reinvented fast. This whole top-down approach is now suffering the usual wear and tear of the law of diminishing returns. BJP as a party of governance needs to evolve into a more horizontal structure where in local faces can also be held accountable – what use is a towering leader like Chaudhary Birender Singh if he cannot command the presence of merely 1600 people for a public meeting?

In states where BJP has powerful local leaders like Shivraj Singh Chouhan or Vasundhara Raje or even a Yeddiyurappa, voters are willing to bet on the local leadership to solve their problems, but in vast expanses of north India, brand NaMo is slowly facing the challenges of triviality and this is where the horizontal integration of local brands to complement tireless Modi campaigning is most needed. In fact, the Prime Minister himself ought to use his campaign presence sparingly over the next 2-3 years and instead concentrate more on providing the right vision for governance, else brand NaMo will face the same dangers that brand Rajiv faced in the late 80’s when a nation lost all her hope and an entire generation of Indians began to believe in coalition governments where no leader or party was fully trusted to govern Bharat.