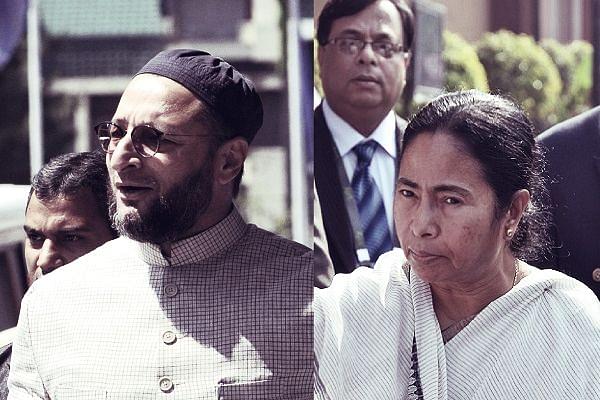 Owaisi had declared his intention to fight the crucial Assembly elections in Bengal in 2021. Since that would mean a split in Banerjee’s Muslim vote bank, thus benefiting the BJP, the Trinamool supremo has been thinking of ways to counter the AIMIM.

She has now found the perfect foil within her own party. “The Trinamool chief has realised that Islamist hardliners within the Trinamool can be used effectively to counter the AIMIM and keep the Muslim vote bank intact,” said Snehashish Manna, a teacher of political science at Calcutta University.

That is why Trinamool’s Islamists like state minister Siddiqullah Chowdhury, who is also the president of the Bengal branch of the Jamiat Ulema-e-Hind, have started taking a hardline stance in favour of the Muslim community.

Chowdhury, who has courted controversies in the past and is known for his radical views, defended the nine Muslim men from Bengal’s Murshidabad who had been arrested by the NIA a couple of weeks ago for belonging to an al-Qaeda terror module last week.

Chowdhury, a minister of state with independent charge of mass education and library services, proclaimed at a public ceremony in Murshidabad, where the families of the terror accused were present, that the nine were innocent.

Chowdhury claimed that the nine men were being framed as part of a greater conspiracy to tarnish the Muslim community.

The minister’s proclamation was hailed by many Muslims in Bengal. Chowdhury had earlier spoken in defiance of the Supreme Court judgement on triple talaq and asserted that Muslims would continue to follow the sharia.

Another Muslim leader in the Trinamool that the party chief is planning to field to counter the AIMIM is the controversial Ahmed Hasan Imran.

Imran, who was nominated to the Rajya Sabha by the Trinamool, had co-founded the proscribed Students' Islamic Movement of India (SIMI) and became the president of the Bengal unit of the outfit.

His alleged involvement in the 2007 Kolkata riots and the 2013 Canning Riots was being investigated by the CBI. He is also alleged to be closely involved with the Bangladeshi terror outfit Jamaat-ul-Mujahideen Bangladesh (JMB).

There are a few other radical Islamists in the Trinamool who have been asked to ensure that the Muslim community does not get swayed by fiery speeches by AIMIM leaders and lean towards that party.

The easiest way for the Trinamool to keep its Muslim votebank intact is to match the AIMIM’s hardline rhetoric and adopt a more hardline stance than the AIMIM and its chief Asaduddin Owaisi.

Owaisi is a fiery speaker who sways the masses with his rhetoric and radical views and speeches. Mamata Banerjee knows that Owaisi can easily make a substantial dent in her Muslim votebank.

Muslims constitute nearly thirty percent of Bengal’s electorate and decide the electoral outcome in nearly a hundred of the state’s 294 Assembly constituencies.

The 2021 state polls are crucial for Mamata Banerjee since the BJP has mounted a strong challenge. If the AIMIM can bag even five percent of the Muslim votes, it will translate into certain defeat for the Trinamool.

Hence, Mamata Banerjee is desperate to counter the AIMIM and ensure it does not make any substantial inroads into the Muslim community.

“She (Mamata Banerjee) has figured out that the best way to preserve her vote bank is to match the match and even go one up on the AIMIM’s radicalism and rhetoric.

"Hence she is deploying the radical Islamists in her party. These hardliners in the Trinamool are being asked to campaign intensively in the Muslim-majority areas and win over clerics in order to ensure that Muslims stay loyal to the Trinamool.

“Trinamool leaders like Chowdhury and Imran have been visiting Muslim-majority areas and holding meetings where they have been giving fiery speeches. They are positioning themselves as more radical and Islamist than Owaisi and other AIMIM leaders,” said a senior Congress leader from Murshidabad.

However, they have been operating below the radar and away from the media glare so that their radical rhetoric does not put Mamata Banerjee in an awkward position.

However, as Siddiquallah Chowdhury’s address giving a clean chit to the nine al-Qaeda terrorists has shown, it is not always possible to keep such speeches and controversial pronouncements under wraps.

If the radical speeches and pronouncements of some Trinamool netas become public (like Chowdhury’s clean chit to the terror accused), it can lead to counter-mobilisation within the majority (Hindu) community in favour of the BJP. That will also harm the Trinamool,” said Manna.

Another reason why Mamata Banerjee’s gambit may not work is that the plight of Muslims has remained unchanged even after the Trinamool came to power in 2011.

“The AIMIM is pointing this out to Muslims and that is striking a chord among members of the community, especially in the rural areas,” Manna added.

Hence, Mamata Banerjee may not be able to prevent a split in the Muslim vote which has been solidly behind her since 2011 and has led her to two successive wins in Bengal.