Himachal’s Anti-Conversion Law Is A Big Blow To Both Mullahs And Missionaries, But... 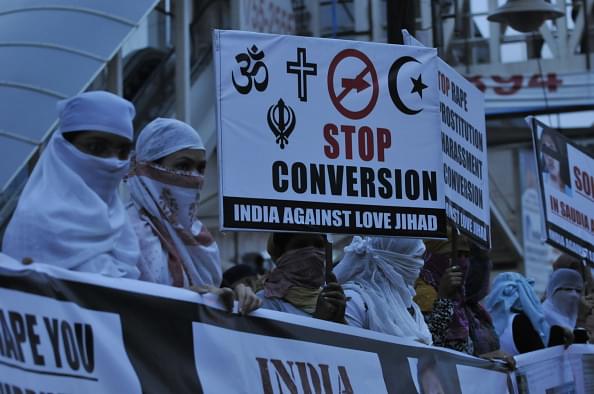 Women against love jihad hold placards to protest against the practice and conversion in Bhopal. (Mujeeb Faruqui/Hindustan Times via Getty Images)

The Bharatiya Janata Party (BJP) government in Himachal Pradesh passed the Freedom Of Religion Act, 2019 in the state assembly on Friday (30 August) with a thumping majority. Based on the ‘live and let live’ principle, the law is aimed at providing true religious freedom by prohibiting conversions via use of force, misrepresentation, undue influence, coercion, inducement or by any other fraudulent means including, and this is important, for the sole purpose of marriage.

For the aforementioned reasons, it is also being referred to as the anti-conversion act in popular media. Himachal Pradesh is one of the seven states in the country which have enacted such a legislation. Others who have tread this path are Odisha, Madhya Pradesh, Gujarat, Uttarakhand, Chhattisgarh and Jharkhand.

Chief Minister Jai Ram Thakur tabled the Bill in the Assembly. In the statement of objects and reasons, he justified replacing the ‘Freedom of Religion Act, 2006’ with the new one stating that

a) it was imperative to keep up with the times as the society has undergone many transitional changes since 2006;

b) the punishments prescribed earlier weren't sufficient to act as a deterrent;

c) marriages solemnised for the sole purpose of conversion weren't proscribed; and

These lacunae have been corrected in the new Act.

Those found guilty can be awarded maximum jail time up to seven years. Marriages for the purpose of conversion can be declared null and void if either party complains.

Any organisation or institution found guilty of violating the Act's provisions will be barred from receiving funding from within and outside of the country. This could prove to be the most effective tool in countering mass conversions backed by foreign money and should give sleepless nights to organisations which indulge in coerced conversion under the garb of charity or social work.

Those who want to convert willingly (and the ones who are converting them) will have to give one month’s advance notice to the District Magistrate (DM), who in turn shall order an inquiry in the meantime to make sure that the conversion is indeed voluntary.

It goes without saying that the Act will be challenged in the courts. Especially the bit about one month advance notice to the DM runs the risk of being struck down by the judiciary.

In a 2012 judgment, the Himachal Pradesh high court had declared a similar provision of the 2006 Act as ultra vires the Constitution. The court had held that “a person not only has a right of conscience, the right to change his belief, but also has the right to keep his belief secret.”

Be that as it may, CM Thakur and his government deserve two cheers for enacting this legislation.

First cheer for prescribing the highest jail term (up to seven years) for forced conversions of minors and women especially through the marriage route. We have witnessed many cases where minor girls who would otherwise not be eligible for marriage under the Hindu Marriage Act or the Special Marriage Act are converted first and then married according to Sharia law (Muslim Personal Law).

This route has been made difficult now and is bound to give serious heartburn to mullahs as well as those involved in the so-called despicable ‘love Jihad’ activities.

Second cheer for looking out for non-Muslim women and ensuring for them justice in case they end up getting defrauded and converted in the name of marriage. On their complaint, such marriages can be declared null and void.

I am withholding the third cheer because the Act doesn't go far enough and leaves a lot to be desired.

First, it should've declared all conversions of minors illegal and any attempts to convert them (especially via marriage) punishable by law. If you can't vote or get married until you are 18 years of age, why should you be allowed to make as big a decision as converting to another religion — and that too without permission of a parent or guardian?

Second, merely declaring marriages conducted solely for conversion as void doesn't do much for the women victims. Breaking up a marriage is not as easy as to stop buying from a shopkeeper who fleeces you. Separation imposes very high costs on all involved.

In inter-faith marriages, women are most likely to have already been ostracised by their family and community and so need more help.

The Act should've prescribed stiff punishments for those who defraud women via conversion and marriage. It failed to make any such provisions.

Outlawing the latter would mean that no non-Muslim woman would ever have to change her religion to marry a Muslim man i.e. take the Sharia route thus losing considerable number of her rights regarding inheritance, property, custody of children, alimony, etc.

Perhaps, the Himachal Pradesh government can consider complementing its 'Freedom of Religion' Act with a 'Protection of Women's Rights' Act where all marriages between a Muslim male and non-Muslim female are declared valid only if they are solemnised using the Special Marriage Act.

Third, while the Act puts a premium on forced conversion, it rightly exempts re-conversions (converting to one's parent religion) from its purview. But is this enough? What if someone whose forefathers were converted some generations back (either by force or inducement) and (s)he wants to go back to the religion of his/her ancestors? The government can think of exempting such re-conversions too.

To sum up, Himachal Pradesh government and CM Thakur deserve two cheers for moving in the right direction in ensuring true freedom of religion free of coercion and deceit, but there is a lot of room for improvement.

The grapevine has it that the central government is also mulling a national law outlawing forced and fraudulent religious conversions and it can come as soon as by end of this year. Even if it doesn't, the BJP governments in other states should certainly be thinking of bringing such laws.

One hopes that they would improve on the existing legislation in seven states and fix the loopholes that have plagued them, resulting in their poor implementation.