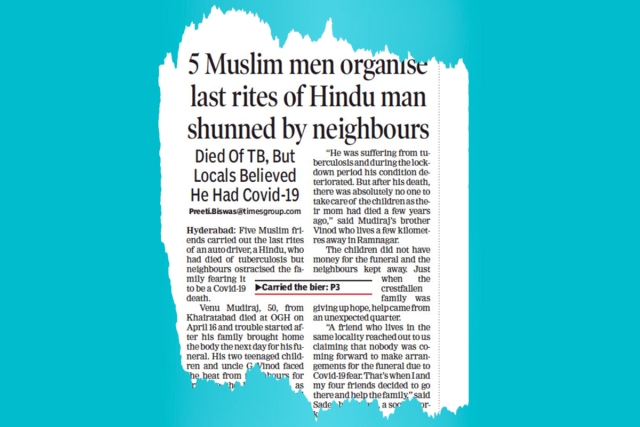 The report published on the front page of The Times of India headlined ‘5 Muslim men organise last rites of Hindu man shunned by neighbours’.

A Hindu family in Telangana has submitted a written complaint at the local police station accusing five Muslim men of giving false information to the media that they organised the last rites of their family member.

The complaint, written by the deceased’s 18-year-old son Sachin, was given on 21 April to the station house office (SHO) of Punjagutta Police Station in Hyderabad (a copy of it is with Swarajya).

Sachin’s father Venu Mudiraj passed away on 16 April in a hospital. He was 50.

“Five Muslim friends carried out the last rites of an auto driver, a Hindu, who had died of tuberculosis but neighbours ostracised the family fearing it to be a Covid-19 death,” the report said.

Similar reports were published by The Hans India and Andhra Jyoti, says the family.

In his complaint, Sachin has named the five Muslim men as Sadeeq bin Salem, Mohammad Majid, Abdul Muqtadir, Mohammad Ahmed and Shaik Khasim. The complaint is also against the three publications mentioned above for “their deliberate reporting of fake defaming and insulting our family and also for mental harassment caused to us”.

The complaint says that the family was shocked to read this.

“I, further, submit that the 5 Muslims had visited the grave yard on the day of the funeral, requested us to allow them to carry the bier took photograph without our knowledge and left the grave yard within 5 minutes, and created false news for their personal publicity, and further the news papers had printed the false news without any verification, causing insult & defaming our family in the society and caused several mental harassement…(sic),” the complaint says.

It is pertinent to mention that the family had reached out to this correspondent yesterday, calling the Times of India report false and offensive. The report had made them the centre of community ridicule as people were asking if Sachin’s father was a "lawaris" (orphan) that they could not gather four people from their own community to lift the bier, the family said.

The deceased’s brother Vinod said that the five men got themselves clicked with the bier on 17 April without his knowledge, and the next day, made him talk to a press reporter over the phone saying that the report could get the family financial help from the government.

Vinod said he never told the reporter that it was those five Muslim men who organised the last rites of his brother. “I never said it. It’s wrong. It’s totally false,” he said.

Sachin too sent his video statement to this correspondent yesterday, in which he said that the five Muslim men, claiming to be his father’s friends, came and sought permission to hold the bier for sometime at the shamshan ghat but did not do anything else.

“We don’t know them at all. But since they said they were my father’s friends, we allowed them to hold the bier. They then took photos and spread the news in newspapers and on social media that they performed the entire last rites. That’s not true. They didn’t do anything,” he said.

Sachin also shared with this correspondent an audio recording, which he said was between “one of those Muslim men” and his maternal uncle Bharath after he saw the media reports.

You can listen to the audio and the read the transcript of the call in Swarajya’s report which was published yesterday, here.