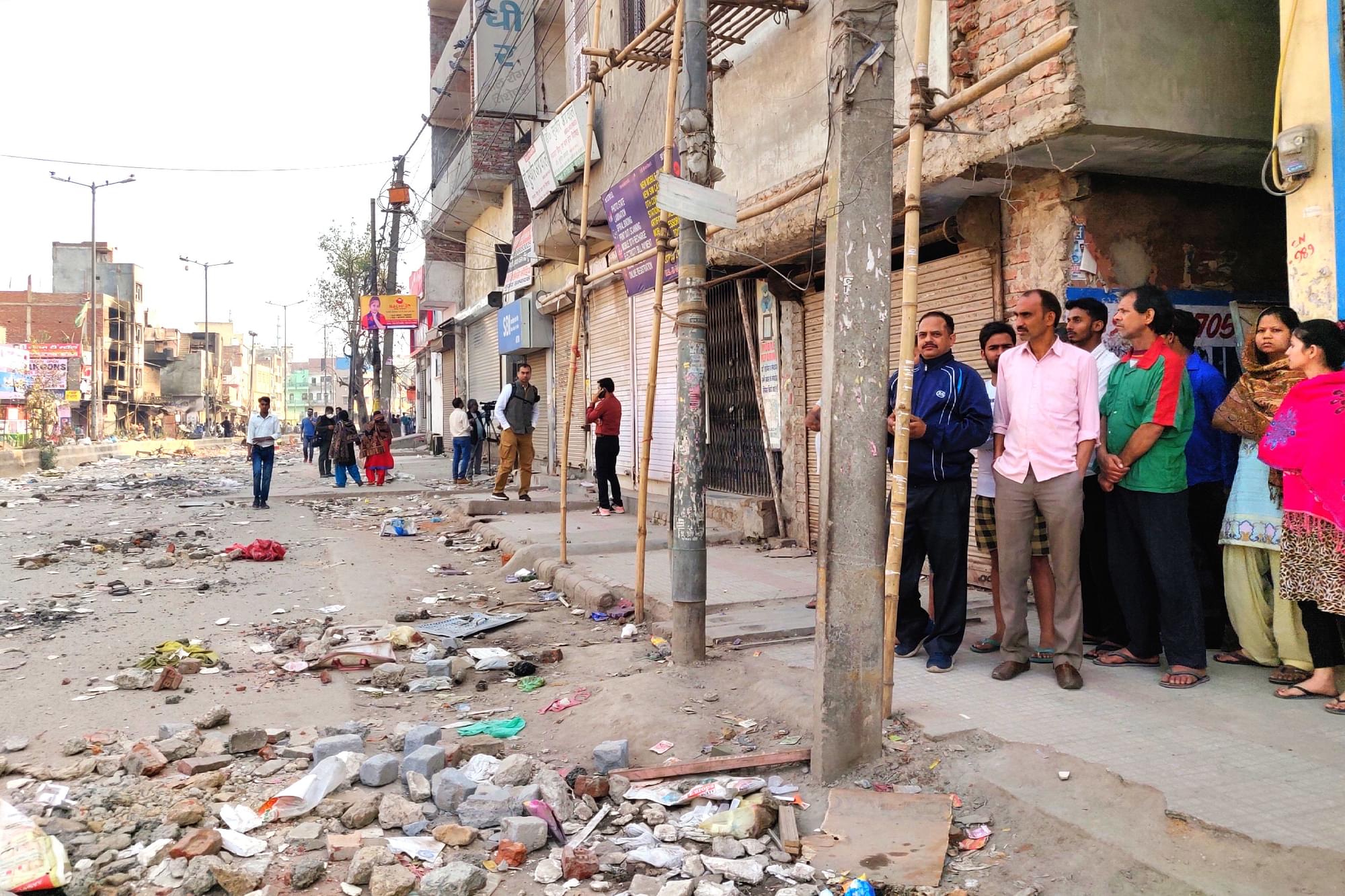 Residents of the lane in which Ankit Sharma’s house is located. The picture was clicked on 27 February/Swarajya

New Delhi: From the Gokulpuri metro station, only one out of the scores of autorickshaws we approach, agrees to take us to Khazoori Khas, where the family of murdered Intelligence Bureau (IB) employee Ankit Sharma lives.

“We have no option but to pass through Mustafabad. God knows how I acted so stupid as to get this Om tattoo carved on my arm,” the driver begins.

“Even if I run for my life, they will burn my auto. Its insurance has expired.”

“We will be passing through narrow lanes. Both of you keep your mouth shut. Madam, you are light-skinned so cover your face with the scarf,” he says before the ride.

Mustafabad is a Muslim-populated area.

As we emerge onto the Karawal Nagar main road — our destination — on which stands the building of absconding Aam Aadmi Party (AAP) councillor Tahir Hussain, there are security forces, and television and print reporters all around. A familiar resident approaches us. He says he is horrified to learn that we took that “dangerous” route. “Ek story to aap par honi chahiye [one report should be done on you],” he says.

In this high-density, congested and chaotic pocket of north-east Delhi, a deep mistrust of the ‘other’ community is now rampant.

Some news channels have taken their cameras inside the three-storey building that residents say houses Hussain’s office. Muslim residents of Mustafabad and Hindu residents of the adjoining Moonga Nagar are huddled at the entrance of their lanes, located on the other side of the road, watching the action.

A noise is heard from the Khazoori Khas area that is on the left side of Hussain’s building. The noise and the ensuing chaos prompts several men in uniform to rush to the spot. It turns out that Swati Maliwal, chief of Delhi Commission for Women appointed by the AAP government, is briskly walking back to her vehicle with some men raising slogans behind her. “Swati Maliwal go back”, they shout. Maliwal leaves the area.

With Hussain under the police scanner for Sharma’s death, AAP is facing huge criticism from the Hindu residents. Video have emerged of hundreds of men standing atop Hussain’s building throwing a volley of stones and petrol bombs on other buildings and on the road.

Residents say it was a Muslim mob that targeted Hindu residents and their businesses and temples. An equally large mob is gathered on the streets below, many of them are seen indulging in stone-pelting.

They say the videos were shot on Tuesday (25 February).

Sharma, who went missing on Tuesday evening, was found dead on Wednesday. His heavily mutilated body was fished out from a clogged drain in Chand Bagh, which is on the right side of Hussain’s building. Eyewitnesses and locals say he was “caught” just outside Hussain’s building and was possibly dragged inside and killed.

Sharma’s house is located in a lane so narrow that two persons can’t walk simultaneously. The house is latched from inside and the inmates aren’t opening the gate for any journalist or visitor. Neighbours say that the family has gone to their native village and only caretakers are at home.

Sagar, who lives three-four houses away, says he saw Sharma leaving his house around 4 pm on Tuesday. He was dressed in black pants and a black shirt with a towel around his neck, says Sagar. “It seemed he went out to check what was happening outside. He also had a helmet in his hand,” he says.

Another neighbour, Pradeep Kumar, who lives right opposite Sharma’s house, says that was the last anybody in the lane saw him.

Pradeep Verma (not to be confused with Sharma’s neighbour) is manager at a car parking adjoining Hussain’s building. He breaks down at the mention of Sharma, saying he barely escaped a similar fate himself.

Around 4 pm, a mob forcibly entered inside the parking, he says.

“They were all Muslims. As soon as they entered, they said, ‘Hindu hai maaro’ [He is Hindu, kill him].”

“They had blunt knives and rods, and bottles filled with petrol. They poured petrol on me as well. Only I know how I managed to save my life.”

“I still shudder at the thought. It could very well have been my photograph displaying on news channels before Sharma’s,” he says.

Pradeep manages a car parking a a few metres from Tahir Hussain's building. He breaks down as he recalls how a mob entered his place (gutted) with weapons and petrol bombs

Verma says that while he escaped and jumped the building to his safety, the mob burnt everything in the parking area. “All the cars are charred. Even the motorcycle belonging to a policeman who was on duty here, was set on fire. In fact it was us residents who rescued the cop.”

Verma says he saw Sharma being “caught” by a mob.

“I remember he was running for his life like everyone else. The mob was pouncing on people. They hit him with something on his face and he couldn’t manage to escape their clutches.”

“We only saw his body later.”

“It happened outside Hussain’s building. It looks like he was dragged inside and killed,” he says.

Verma says a mob had created a ruckus the previous evening too and broke the shutters of the parking. However, things were much more violent on Tuesday, he says.

“On Tuesday, the mob comprised unfamiliar faces. They were outsiders, not locals.”

Golu, a friend of Verma who says he was present at the parking that time, makes us talk on the phone to one Rahul. Golu says Rahul witnessed Sharma “disappearing”.

Rahul tells us that it’s not his real name and he is hiding his identity out of fear. He says he lives nearby but is too scared to step out of the house or call anyone home. He says he would only talk over the phone and won’t share his number either. He speaks amid sobs throughout.

“I knew Ankit. We weren’t thick friends but quite familiar. That day, Ankit, I and two other men were walking past a Muslim area amid heavy stone-pelting from the rooftops. We were walking very fast in order to rush homes. Ankit was in front of me while the other two men were behind me. Ankit had his hands raised and was signalling for the crowds above to stop. When the pelting became heavier, we started running.”

“At one point, I looked back and a chill went down my spine. The three men had disappeared. I didn’t look back again, and ran for my life.”

Rahul says he knows the other two men by faces but not names. “They are from our area,” says Rahul.

In the first information report (FIR) registered in Sharma’s death, the statement by his father Ravinder Sharma says that when he went around inquiring about his son, locals told him that a man is believed to have been thrown from a mosque in Chand Bagh into a drain in that area.

A search of the drain was then carried out and the body was found. It had no clothes except for the underwear, and it had stab wounds all over and burnt marks on body parts suggesting an attempt to hide his identity, the statement says.

The statement says that “goons” had assembled in Hussain’s building that evening and were unleashing violence and mayhem in the area.

Ankit Sharma, 26, was security assistant with the IB. His father is an assistant sub-inspector with the Delhi police.

A website has anonymously quoted a senior police officer as saying that Sharma’s is a targeted killing and “a hate crime”.

Hussain has denied any role in the violence or the murder.

“…For our safety, my family and I had moved away from our home on Monday in police presence. There should be an impartial probe into the incident and action should be taken against whoever is found guilty. It is wrong to target me. I and my family have nothing to do with it,” Hindustan Times has quoted Hussain as saying.

By afternoon, the police had sealed his building, barring the media from entering inside.

We asked many residents but none could identify the two missing persons last seen with Sharma.

On Thursday, three more bodies were found floating in a drain in Gokulpuri, as per this Indian Express report. The Times of India quoted a resident Ranjeet Kumar from Bhagirathi Vihar as saying that the deceased did not belong to their locality and the bodies might have flown from Mustafabad side.

The drain is about a kilometre in length and flows from Brijpuri and Mustafabad to other areas of Northeast Delhi.