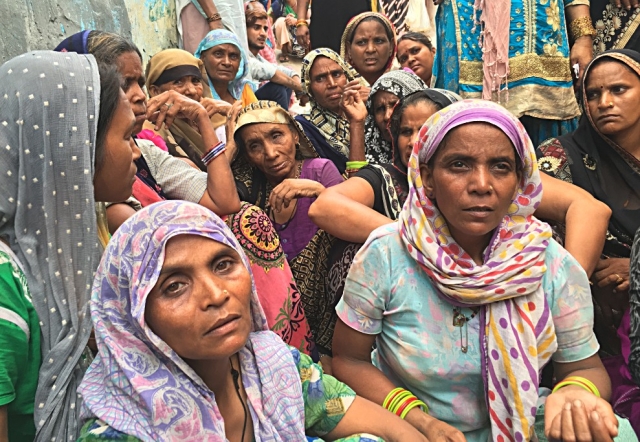 In yet another case of 'honour killing' spurred by religious bigotry, a Hindu man was brutally killed by the family of his Muslim wife a week ago in the National Capital Region. What's particularly horrifying in the case is that the woman's family had already got the couple forcibly divorced two months ago.

The man's decaying body was recovered on Tuesday afternoon (August 21). The woman’s father and a neighbour, along with her brother who allegedly carried out the killing, have been arrested and have reportedly confessed to the crime. The rest of the family hurriedly vacated their house on Tuesday night and left for their hometown in Mewat, say neighbours, leaving their goats and some belongings behind.

When Swarajya visited the Nehru Colony in Haryana's Faridabad district on Wednesday, the familiar signs suggesting a sensational crime were missing. No police or media could be seen. Also missing were any signs of Eid festivities in this mostly Muslim-populated area.

Irshad Qureshi, a 20-year-old resident, helps with direction to the house of Sanjay Kumar, the victim. A group of women are sitting outside in the street on a plastic mat. Amidst them are Sanjay's inconsolable mother Manju Kumari and her sister Saroj.

Sanjay, who was about 22, fell in love with Rukhsar when they lived in adjoining houses in the same colony. About a year ago, the two eloped. They would next reappear in the colony eight months later.

A wailing Manju told Swarajya that Sanjay took Rukhsar to his grandfather's house in Rajasthan where they registered their marriage in a court.

Rukhsar changed her name to Rukmini, and began observing Hindu festivals and rituals, says Manju. A neighbour shows a photograph of the couple of their wedding day where Rukhsar is wearing sindoor. "Nobody asked her to change her religion or name. She did it on her own," says Manju's neighbour Babli. "She liked our things, chooda (bangles), sindoor and mehendi. She also liked observing fasts, particularly Karwa Chauth," Babli says.

Manju says she would talk to her son and daughter-in-law over the phone. She says that while in Rajasthan, Rukhsar secretly kept in touch with her mother Madina who even sent her gifts on one occasion.

This wasn't known to the men in Rukhsar's house. Irshad Qureshi, who knew the family well, told Swarajya that after the two disappeared, Fajruddin (Madina's husband and Rukhsar's father) sent him along with another boy from the colony to Rajasthan to check her daughter's whereabouts. "But we did not find her," says Irshad.

"Fajru and Saleem hated Sanjay for doing this to their daughter. Any parent would. But things would have been fine if Sanjay accepted their condition of converting to Islam," says Shehzad. "But Sanjay's chacha and mama did not allow it to happen," he adds.

The tension between the two families continued, but took a turn for the worse when Rukhsar again became pregnant, says Manju. That's when the woman's family decided to officially separate the couple.

"Two months ago, Rukhsar's father and two brothers took their daughter to a court to divorce Sanjay. But Sanjay never divorced her,” says Sunita Kumari, another of Fajruddin's neighbours. “But we do not know all the details,” she says.

In any case, Rukhsar left Sanjay’s house and returned to her maiden home. A distraught Sanjay shifted to Rajasthan while her mother and younger brother continued to live in Nehru colony.

Sunita told Swarajya that after the divorce, Madina often said that she saved her daughter from dying a Hindu. "When they have their community gatherings, we also sometimes sit and listen to their conversations. Madina often said that she has managed to save her daughter from being cremated. You know, they get buried and we get cremated in shamshan grounds," Sunita said.

Meanwhile, except for the pain Sanjay felt at the separation, things were calm between the two families, says Manju.

But then came August 15 and her world came shattering down.

"Saleem called up Sanjay on the phone and told him that he wanted to meet him and wanted to end the matter once and for all. He said he wanted to make peace," she says.

"Sanjay returned home. The next day (August 16), Saleem came on a motorcycle and took him away. But when Sanjay did not return till late evening, I got worried. I went to Saleem's house and found him inside. I asked him where was my son. He said he did not know and that my son must have drunk heavily and was possibly lying somewhere in the streets," says Manju. "But my son did not drink. He neither smoked nor chewed tobacco."

Neighbours speculate that the trigger for the extreme step could be the fact that Sanjay continued to talk to Rukhsar over the phone and even came to meet her a few days ago.

Unlike Rukhsar's family that neighbours say is one of the financially better ones in the colony, Sanjay's is a poor household. Manju, who lost her husband many years ago, works as a maid in a coaching centre. Sanjay, like his younger brother, did odd jobs.

As is often observed in cases where complainants are poor, the local police did not entertain her, alleges Manju. "I went to the police and told them they should ask Saleem as he was the one who accompanied my son, but the police did not record anything," Manju told Swarajya. Neighbours allege that Fajruddin sold off a plot of land in an adjoining lane to bribe the police into inaction.

But Manju found support in a police station in another area, Sainik Colony, where a complaint for kidnapping was registered and probe initiated.

On Tuesday (August 21) afternoon, the police found the body of Sanjay at a spot not too far away from his house. Along with Fajruddin and Saleem, the police have also arrested a friend of Saleem named Sumit Agarwal who lives right opposite to Saleem's house. Hunt for a fourth accused Mohammad Ali is on.

An officer from Dabua police station that is now handling the case, who did not wish to be named, told Swarajya that the body had decayed, suggesting the murder happened a few days ago. However, he said that the body wasn't chopped into three pieces as some of the media reports have suggested. "The body has been sent to Rohtak PGI. We are awaiting the post-mortem report," he said. Hindi daily Dainik Jagran has quoted a crime branch officer, Naveen Kumar, saying that Saleem has said in his statement that it was Sanjay who abandoned Rukhsar after marrying her and Saleem killed him in revenge.

Shehzad told Swarajya that he saw the body when it was being recovered. “It was infested with insects. It was a horrible sight,” he said.

On Tuesday, the residents, supported by activists from some Hindu organisations, blocked the main road, protesting inaction by local police.

Manju, a simple woman who the neighbours said is in great shock and constantly mumbling to herself, drew a blank when a Hindu activist asked her the next day what is it that she wanted from the government. "I don't know," she said amid tears.

"You want the culprits to be hanged? We will press the administration in handing out the worst possible punishment to them," said one Billu Bajrangi who introduced himself as a member of a gau raksha group from Faridabad.

"They keep taking our daughters away but murder our boys when they take away theirs. We will not sit in silence," he addressed the gathering.

The gathering, that comprised a lot of Muslim women, didn’t respond. "Phansi chahiye (we want them to be hanged)," Manju said.

Some neighbours said they wanted the house vacated by Fajruddin's family to be given to Manju. Several heads nodded.

This horrific incident evokes memory of another gruesome killing in New Delhi in February where the family of a Muslim girl killed her boyfriend Ankit Saxena by slitting his throat on a public road. Swarajya had earlier reported that the girl's mother displayed signs of religious bigotry and often told one of her neighbours - a Muslim woman who had married a Hindu man - to convert her husband to Islam if she wanted to escape burning in hell.

As per Ashish Dubey, a lawyer who provides legal assistance to Hindu rights organisation Agniveer and has legally fought more than 10 cases of similar inter-faith relationships, ‘honour killing’ is observed to be high in the Muslim community. He, in fact, said that killings such as Ankit's and Sanjay's should not be called 'honour killing' but plain murder since the perpetrators did not kill their own daughters to save their honour.