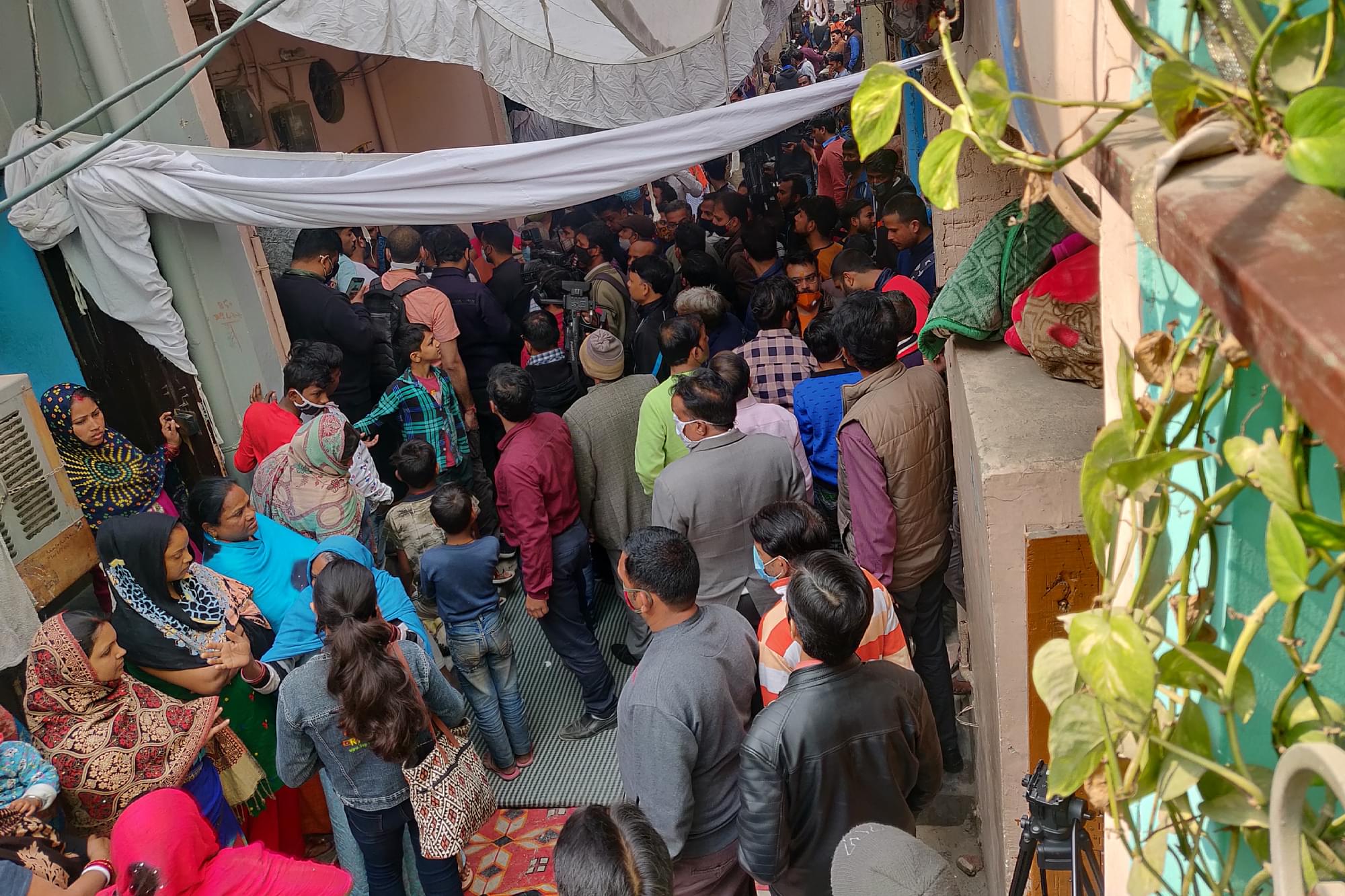 Outside Rinku Sharma’s house on 12 February/Swarajya

A 25-year-old man from New Delhi, Rinku Sharma, was brutally murdered by a Muslim mob on the night of 10 February. The killers were known to Rinku and held a grudge against him for his Hindu activism and association with Hindu organisations, his family has told the police.

On 12 February, the narrow street in K-block of Mangolpuri where Rinku lived, was jam-packed with media persons and activists from Vishwa Hindu Parishad, which Rinku is said to have been associated with.

When these correspondents reached his house around 11 am, the house was bolted from inside. Relatives, who were mourning outside, said that that the legislator from Mangolpuri associated with the Aam Aadmi Party that currently governs Delhi, Rakhi Birla, was speaking to the family in private.

Some activists complained that the door had been shut for more than 30 minutes, and the AAP MLA could have been ‘tutoring’ the family. The killers were volunteers for AAP, they alleged.

These correspondents stayed in the lane for more than an hour, but the house remained bolted. We however accessed the complaint given by the family to the police after Rinku’s death, and the statement registered in the first information report (FIR) in the attempt to murder case when Rinku was still in hospital.

The hand-written complaint by Rinku’s younger brother Manu, addressed to the local police chief and dated 11 February, says that Rinku was an active participant in fund collection drives for Ram temple reconstruction in Ayodhya. He would also attend the Hanuman Chalisa recitation at the local market regularly on Tuesdays.

The complaint says that it is for these reasons that locals namely Tajuddin, Islam, Jahid, Mehtab, Nasruddin, Nasruddin’s wife Shama and his two brothers, Mehtab’s father and Shama’s two brothers, together attacked his house around 11 pm on 10 February.

The mob came armed with knives and rods, that resulted in death of Rinku.

His parents and a neighbour named Akash Goswami sustained injuries.

The family somehow took Rinku to Sanjay Gandhi hospital, but the mob reached there too. Jahid was seen with a knife, the complaint concludes.

The statement recorded in the FIR in the name of Manu is quite different.

It says that some locals namely Nasruddin alias Laali, Islam, Mehtab alias Natu and Jahid alias Chingu had entered into a spat with Manu’s family on Dussehra over a programme at Ram mandir park. Since then, the group would often taunt the family that ‘we’ll see you some day’.

On 10 February, Nasruddin, who lives in the same lane, got his relatives Islam, Mehtab and Jahid to launch an attack on Rinku and other family members, saying ‘we’ll teach you a lesson’. The mob stabbed Rinku on his back, who had to be hospitalised, the statement says.

The police booked the suspects under IPC sections 307 (attempt to murder) and 34 (acts done by several persons) along with various sections of the Arms Act.

A video of a distraught Manu, speaking to the media after Rinku’s death, shows him saying that the Muslim group had been after the family ever since a spat broke out over a recent rally for Ram temple.

Another video of Manu’s father Ajay Sharma, who looks inconsolable, shows him telling the channel that his son died for being a Modi supporter and a Ram bhakta.

All these statements talk of no birthday party or a related scuffle. The police however have told the media that the attack happened after a spat over a birthday party in the afternoon of 10 February.

The Times of India has quoted an unnamed “senior police officer” as saying that “a scuffle had ensued during a birthday party that was attended by both the accused and the victim”.

NDTV too has quoted an unnamed police officer to say that “so far, during the investigation, it has surfaced that the quarrel started during a birthday party over shutting down of a restaurant”.

Similarly, Hindustan Times too has quoted an unnamed police officer to say that “the murder took place around 11 pm after Danish and Rinku had an argument at a birthday party in their neighbourhood where they both had been invited”.

While the family was unavailable to comment on this angle when we visited the spot, the Sangh workers and neighbours dismissed this as a ‘cover-up’ by police.

Sunil, 24, who introduced himself as a “Sangh karyakarta”, said that the police was parroting the birthday party angle based on the accused’s disclosure statement to the police.

He said that the Muslim group had ganged up against Rinku and other Sangh activists after 5 August 2020 itself, when prime minister Narendra Modi laid the foundation stone for Ram temple in Ayodhya.

Vikramjeet, who also introduced himself as a “Sangh karyakarta”, said that Rinku would participate in rallies in the area for fund collection for Ram temple and that would enrage the accused’s family. Vikramjeet said he did not personally know Rinku.

Prem Devi, who lives right opposite the Sharma’s, said that most families in the street had gone to sleep by the time the mob arrived on 10 February. “We heard a commotion and came outside. But, by then, the mob had left and they were taking an injured Rinku to the hospital,” she said. “We saw nothing.”

Asked if Rinku would participate in rallies for Ram temple in the lane and if that caused tension, Prem Devi said, “Yes he did. But why is that a problem? Can we not take Ram’s name in our own country?”

Mayawati, an elderly woman in the street, reached out to several reporters with cameras, her voice choking. “They will kill us all. They will kill us one by one. The fear has increased a lot now. A lot. The boy was killed for taking Ram’s name,” she said, visibly shivering.

The house of the accused Muslim family in the lane, a few steps from Rinku’s, was locked from outside, a sticker of Aam Aadmi Party pasted on the wall. We talked to several residents, but none could tell the names of the family members.

Neighbours said that the accused family is into “sattebaazi” (gambling) and close to AAP. They also said that the family is close to a criminal named Tajuddin, but the police were trying to shield him.

Just then, the door of the Sharma house opened. An elderly woman who introduced herself as Rinku’s mausi emerged. A lot of media persons rushed to the door, some requesting to be allowed to enter. The woman declined, saying that Rinku’s father was a heart patient and had been advised to take rest and not talk to the media.

She said she was not an eyewitness to the crime and could not comment on the details.