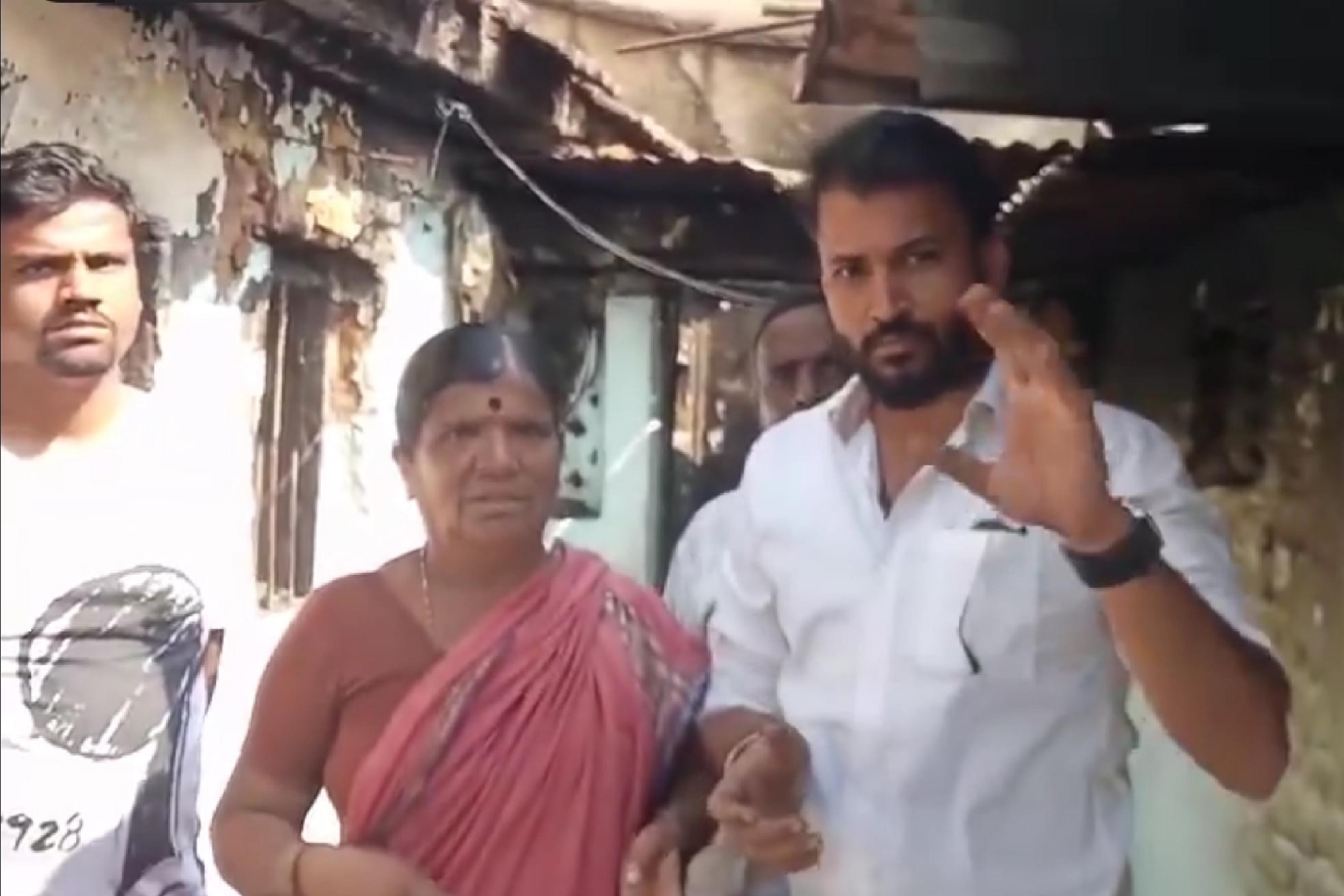 A Hyderabad-based journalist with more a decade-long experience in media posted a video report on his Facebook account on 29 January.

The report was about communal violence that erupted on the night of 12 January in Bhainsa division of Adilabad district, which is some 250 kilometres from Hyderabad.

The 27-minute report, which continues to be available on his account, features video statements of affected residents and footage of burnt houses and vehicles.

In the report, the journalist, Sridharan Siddhu, says that contrary to the statement by the Telangana chief minister K Chandrashekhar Rao that Bhainsa clashes were petty and did not deserve statewide attention, the reality on the ground suggested large-scale violence and property loss.

Siddhu appeals to the government to rehabilitate the victims.

Last seen, the video had around 7,500 shares on Facebook.

Siddhu was made accused in a first information report (FIR, number 49/2020) registered on 31 January under IPC section 153a.

The FIR was registered on the statement of S Sudarsshan, who is assistant sub-inspector at Bhainsa Town police station.

The complaint by Sudarsshan says that Siddhu posted the video and sent it to a large number of people in order to trigger religious hatred between Hindu and Muslim communities in the sensitive Bhainsa town.

Siddhu has been underground ever since. Fearing arrest, he has been moving from state to state. He told this correspondent over the phone that he has been out of Telangana since the FIR.

On 10 February, Siddhu moved the Hyderabad high court against the criminal case against him.

He filed a petition under section 482 of Code of Criminal Procedure seeking quashing of the FIR saying he has been “falsely implicated” based on “concocted allegations, which are false and far away from the truth”.

The petition says that the FIR is a pressure tactic by the police that is acting under political pressure in order to escape from its failure in not maintaining law and order.

The petition further says that the complaint against him is vague and makes no mention of the exact objectionable words, signs or gestures in his video. It says the police carried out no investigation before turning the complaint into an FIR.

The petition also says that no incident of disruption of peace has been reported from Bhainsa because of his report.

Siddhu told this correspondent that he learnt about the communal violence from his friends in Bhainsa, and sensed that the state government was playing it down.

Siddhu, 33, hails from Bhainsa but has been living in Hyderabad for 13 years, working for various media houses. He says he was part of news channel Mahaa News for nine years. His last job, which he recently quit, was with Manam newspaper and portal.

“When I learnt that even after two weeks, the victims had received no help from the government for their rehabilitation, I decided to go there and record videos as proof,” he says.

“I planned to take the videos to [Union Minister of State for Home] G Kishan Reddy,” he says.

As per several reports, here is what happened in Bhainsa: Around 9 pm on 12 January, youths belonging to a community took a bike ride in a colony after removing the vehicle’s silencer, which made a lot of noise.

Some colony residents, who belonged to another community, objected to it. The youths went away, but returned with a mob that indulged in violence and arson, burning down several houses and vehicles in the colony.

By the time peace was restored the next day, properties belonging to members of both communities had been damaged as violence spread to other colonies.

Siddhu says that he found in his reporting that the first and the prime targets in the violence were Hindus, whose houses were burnt down and looted by Muslims.

Siddhu says that when he went to the violence-hit colony in Bhainsa, he saw several cops standing guard, but none of them stopped him from reporting.

Siddhu did this reporting at a time when he was switching jobs. This means that he reported the case as an independent journalist. Siddhu was set to join as a correspondent in a just-launched portal named Nijam, which is an arm of Organiser.org, on 1 February.

Siddhu says that two days after he posted his report on Facebook, he received a phone call from one Srinivas, who introduced himself as an officer from Bhainsa Town police. Srinivas told him to take down his video as it could provoke riots.

“I told him [Srinivas] that what I did was my job as a journalist. I said it’s already been two-three days and nothing untoward has happened,” says Siddhu. “I told him that the poor victims needed wider attention for rehabilitation.”

When he learnt of the FIR, Siddhu moved out of Telangana.

Siddhu says he was surprised that the complaint was made by a cop with whom he had not interacted with at all.

“I don’t know who this ASI is. He was not the one who called me. I feel that making him the complainant is a strategic move on part of Telangana government as he belongs to scheduled caste,” says Siddhu, who belongs to Rangrez caste, which is considered upper-caste.

As he fights the Telangana government in court, Siddhu says the journalist fraternity in Hyderabad is in support of him, but is silent in public.

“The media here doesn’t dare to go against the ruling government. The MIM [All India Majlis-e-Ittehadul Muslimeen] also holds immense clout, and pressures the media into silence,” he says.

“Many journalists have sent me messages that they support me and agree with my reportage, but none of them have spoken out for me in public,” he says.

Asked if his association with Organiser, which is considered right-wing, made him an easy target, Siddhu says that is not the matter.

“Nobody here even knew that I was going to join that portal. The truth is, journalists in Telangana are generally soft targets for the government,” he says.

Note: Swarajya has visited the site of the alleged communal violence in Bhainsa. A ground report will be published soon.