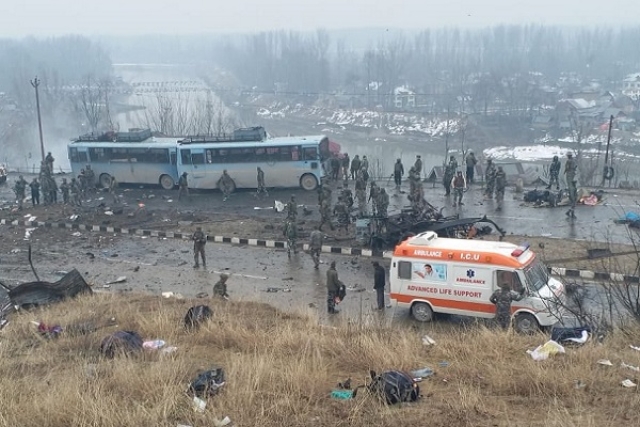 The attack on the Central Reserve Police Force (CRPF) convoy at Pulwama in Kashmir evoked strong condemnation from across the country, including Bengal. But something more happened in Bengal, something which has not happened in the state over the last seven decades. Bengal witnessed an unprecedented outpouring of nationalist rage and fervent patriotism not seen in a very long time.

Cities, towns and villages across Bengal saw young men and women marching down roads, streets and by-lanes, proudly waving the tricolour and mouthing full-throated ‘Bharat Mata Ki Jai’, ‘Vande Mataram’ and ‘Jai Hind’ slogans. Their fervour was unmistakable and infectious. For good measure, there were also cries of ‘Pakistan murdabad’ and ‘Hindustan zindabad’. The processions, candle-light vigils and homages to the fallen CRPF soldiers gained a momentum of their own and engulfed the entire state within a day of the perfidy, Pulwama.

This unprecedented show of nationalism and patriotism marks a significant shift in Bengal’s polity and political culture. Girija Devi, 89, a renowned freedom fighter who stays in Bowbazar in North Kolkata, says that such show of patriotism and nationalist fervour has never been seen in Bengal since Independence. “Bengal produced countless freedom fighters and all of us were hardcore nationalists. But the political culture in the state changed, especially since the late 1960s and such nationalistic fervour is being seen after so many decades,” she recalls.

It is not just the patriotic slogan-shouting and flag-waving that caught the attention of political pundits. Along with all that was the naming and shaming of those who had either justified the attack on the CRPF convoy, or tried to shift the focus on to alleged human rights abuses by security forces in Kashmir. Social media posts by mostly left-wing students, teachers and professionals trying to exonerate Pakistan or indirectly justify the perfidy by referring to alleged excesses by security forces in Kashmir, were met with swift and strong condemnation.

Such posts were shared and went viral within a short period. Young men and women across the state took to the streets to trace those responsible for such posts and forced them to apologise. Videos of the shaming of such people also went viral, emboldening many more to seek out all apologists of terror. Some did go overboard and assaulted all those responsible for pro-Pakistan or pro-terror posts. But the change in popular attitude in Bengal was unmistakable. Employers of people who posted anti-Indian or pro-Pakistani messages on social media, or even qualified their condemnation of Pulwama with mention of alleged sufferings of Kashmiris, were contacted and forced to sack them or take action against them.

Bharatiya Janata Party’s (BJP’s) Bengal unit president Dilip Ghosh says that the recent trend proves that the state’s youth will no longer tolerate the primacy of anti-Indian elements in the state’s political narrative. “For so long, leftists and pseudo-seculars dictated and dominated the political and intellectual discourse in Bengal. And this discourse was largely anti-national and anti-Hindu. Patriotism was frowned upon and nationalistic fervour was termed as ugly and aggressive. According to this narrative, the Indian state has been the wrongdoer in Kashmir and Kashmiri Muslims have been the victims of a repressive Indian state. Hence, terrorism in Kashmir was justified.”

Bengal’s communist and pseudo-liberal and pseudo-secular politicians and intellectuals have always advocated the line that Pakistan and Pakistanis should not be blamed for the terror attacks against India and the only way forward is to engage closely with Pakistan despite all their attacks on India and Indians. Thankfully that has changed, and the educated and socio-politically conscious younger generation in Bengal does not accept this self-defeating and unpatriotic narrative any longer. What is more, they are challenging this narrative head on and forcing a transformation of this narrative,” said Ghosh.

In the past (over the last five decades at least), any show of nationalism in Bengal had always been frowned upon and was also qualified. “While taking care against being overtly anti-Indian, the leftists and so-called liberals used to subtly shame India and our security forces and provide justification for terrorist strikes by Pakistan, by Kashmiri terrorists or by Maoists. This started happening when the intellectual space in Bengal was taken over by leftists, including left radicals, and by their fellow pseudo-secular academicians and intellectuals. While Bengali sub-nationalism was encouraged, it was de-linked from and even pitted against Indian nationalism. This yielded political dividends for the communists and, now, the Trinamool Congress,” said Ghosh’s predecessor Rahul Sinha, who is BJP national secretary.

This sudden emergence and display of nationalistic fervour and patriotism has taken Bengal’s old intellectuals, communists and even the Trinamool Congress by total surprise, and has rattled them no end. Bengali newspapers have commented very prominently on this trend and even wondered aloud about the identity of the patriots. “Who are these tricolour-wielding people shouting ‘Bharat Mata Ki Jai’ on the streets of Bengal?” ran a headline in Anandabazar Patrika, Bengal’s prominent language daily. Some leftist intellectuals and academicians have spoken out against such displays of nationalism.

Amalendu Bhattacharya, who used to teach political science at Calcutta University, says that this change is inevitable. “The youth of Bengal no longer lead a cocooned existence like in the past. So, save for some institutions like Jadavpur and Presidency Universities, where the dominant narrative is leftist and whose students tend to be similarly inclined, the rest of Bengal reflects the prevailing discourse in the rest of the country. Today’s younger generation in the country is overtly patriotic and nationalistic, and this trend has influenced Bengal as well,” said Bhattacharya. Another reason for this is the popularity of social media and its role in influencing opinion and framing new narratives, he added.

Ritwick Acharya, a software engineer with a major tech giant and a graduate from Jadavpur University, has been helping an informal army of Bengali patriots list all “anti-nationals” on social media. Acharya, who works out of New Town-Rajarhat in Kolkata, says that he has been trawling the social media to identify posts which are ‘anti-national’ in content and spirit. “I then share the identities of these people with my group and they then share it widely. Such people are then called out and shamed online. This is necessary to stop them from breeding and spreading anti-national sentiments,” said Acharya. “I passed out of Jadavpur University, which is a den of leftists. I have first-hand knowledge of how the leftists spread anti-national sentiments and build covert support for anti-Indian forces like the insurgents in the Northeast, the Maoists and Kashmiri militants. So I am determined to defeat them in their sinister game,” he reasoned.

This fresh trend in Bengal also reflects the growing acceptance of the BJP in Bengal. It also reflects the Sangh Parivar’s success in setting forth a new discourse that challenges the traditional leftist one. This is also the reason behind the alarm expressed by the leftists and by Bengal Chief Minister Mamata Banerjee. But no matter how much the leftists and others may fret and fume over the growing patriotic sentiment amongst Bengalis, especially the Bengali GenNext, the reality is that the trend is a permanent one. And, say many, a welcome one as well.