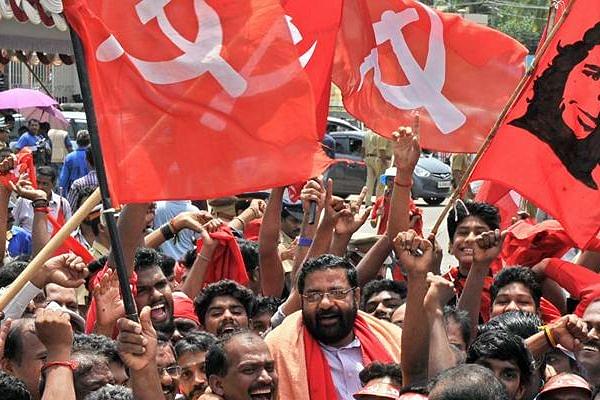 A communist rally in Kerala.

While this drama between the two factions in Kerala Congress was heating up, news broke of rape allegations against Binoy Kodiyeri, son of Kodiyeri Balakrishnan, the secretary of the Communist Party of India (Marxist) in the state. Then came reports of a suicide by an NRI investor, Sajan Parayil in Kannur over the delay in issuance of licence to his ₹15 crore convention centre by the CPM-controlled Anthoor municipality. This came as a double whammy for the CPI(M) which were already reeling from an evisceration in the 2019 election.

Sajan’s suicide set off a political storm not only because of the tragic circumstances, but also because of the political intrigue surrounding P Jayarajan, the former District Secretary of Kannur CPI(M) and MV Govindan Master, a senior leader of the CPI(M). Sajan was a “party” man who donated regularly to the Communist party and can be considered as a “fellow traveller” of the party. Sajan, like many Malayalis who come into the jobs market in 1990s, made his fortune in Nigeria before shifting his base back to his hometown, Anthoor. He started by building and selling villas before investing substantially in “Partha Convention Centre”, but its opening was scuttled because of the municipality’s refusal to issue the necessary licences.

He then did what any one in the situation would have, especially a “party man”: he approached the leadership of the CPI(M) to overcome the issues. But alas, factionalism in the CPI(M) resulted in no movement at all in this regard. Many have pinned the blame for his suicide on PK Shyamala, the Chairman of the Anthoor municipality.

Anthoor is a quaint town in Kannur district in north Kerala, and can be described as a “party village”. All 28 municipality councilors are of the CPI(M), and 14 of them were elected unopposed. Kannur is the “red citadel” of Kerala, and the top echelons of the party have been dominated by leaders from Kannur in recent years. Pinarayi Vijayan, the Chief Minister, and Kodiyeri Balakrishnan, the party state secretary, are both from Kannur. The spate of leaders from Kannur have been uncharitably been described as the “Kannur lobby” of the CPI(M).

But since the sidelining of VS Achuthandan by the official faction led by Pinarayi, factionalism in the Kannur leadership of the party has reached new heights.

This current factionalism can be attributed to the popularity that P Jayarajan has among the CPI(M) cadre. His popularity set off alarm bells in the top echelons of the leadership of the party, as in the Kannur district committee. Despite his own reservations, P Jayrajan was made a candidate in Vadakara and contrary to convention, he had to permanently give up his position as party secretary in Kannur district. The position went to MV Jayrajan, a known rival of P Jayrajan. In the general elections, P Jayrajan was soundly beaten by K. Muraleedharan of the Congress in Vadakara. The margin of his defeat, around 80,000 votes in a constituency with substantial CPI(M) influence, had some suggesting that at least a faction of the CPI(M) had voted against him.

Similarly, there were allegations that those aligned with P Jayrajan voted against PK Sreemathi, the CPI(M) candidate in Kannur who lost by almost a lakh votes.

Sajan, as earlier mentioned, approached the CPI(M) leadership to solve the issues concerning his convention centre. in November 2017. P Jayrajan, who was then the district secretary, intervened in the issue. But the party’s own recommendations were not heard by the Anthoor municipal chairperson, PK Shyamala, who is the wife of MV Govindan Master, who as earlier mentioned is in the camp opposing P Jayrajan.

The party’s own factionalism had led to the suicide of a fellow traveller and well-wisher.

The state government and the CPI(M) leadership have given a clean chit to PK Shyamala and placed the blame solely on the officials of the municipality. To take action against her would mean a tacit victory for P Jayrajan, something that the party leadership does not want at any cost. Another parallel incident that has created somewhat of a controversy is the attack on the CPI(M) rebel COT Nazeer, who contested as an independent against P Jayrajan. After the attack, P Jayrajan visited Nazeer at the hospital, and declared that he had no link to the attempt made on his life.

Nazeer himself cleared P Jayrajan, and pointed fingers at AN Shamseer, the CPI(M) MLA from Thalassery.

The CPI(M) seems to be heading to a real point of reckoning in the state, and there are many things that need to be set right in the run up to the 2020 local body elections and the 2021 Legislative Assembly elections.