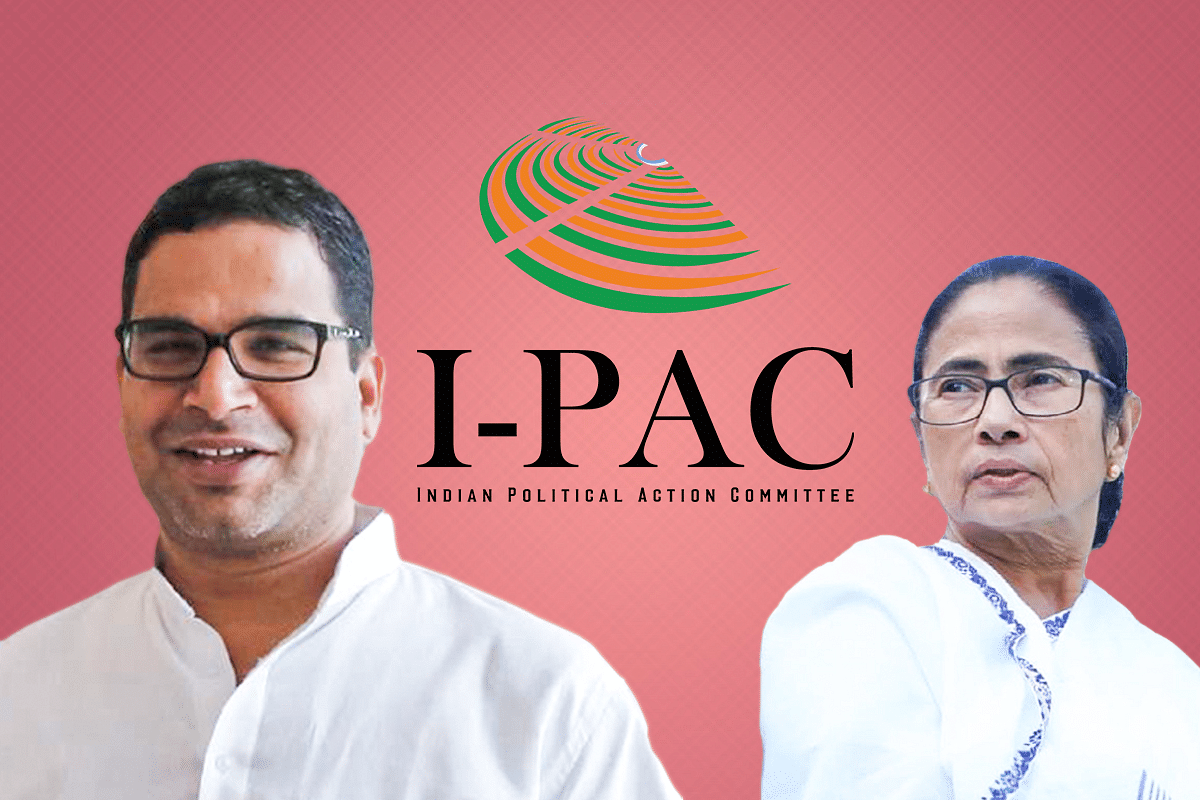 It is no secret that ever since the Trinamool suffered a surprise setback in the 2019 Lok Sabha elections with the Bharatiya Janata Party (BJP) bagging 18 out of the 42 seats in Bengal, an alarmed Mamata Banerjee has increasingly relied on her hired political strategist Prashant Kishor to reverse her party’s political fortunes.

Immediately after the Lok Sabha elections results were announced in the summer of 2019, Mamata’s nephew and heir apparent Abhishek Banerjee roped in Prashant Kishor and organised a meeting between him and his aunt.

Kishor was then given the responsibility of arresting the Trinamool’s declining public support and restoring the party to its prime position. The rest, as they say, is history: Kishor ensured a spectacular turnaround for the Trinamool in just two years and is rightly credited with the party’s landslide victory in the Assembly polls held earlier this year.

What is, however, not known outside the bureaucratic and Trinamool circles in Bengal is the supreme clout that Kishor and his firm—the Indian Political Action Committee (better known as I-PAC)—have come to wield in the state.

Kishor and his I-PAC now monitor the functioning of all senior bureaucrats and all elected representatives of the Trinamool from panchayat pradhans and municipal councillors to MLAs and ministers. Kishor reports directly to Mamata Banerjee and her nephew, and his recommendations on transfers and postings of officials carry a lot of weight.

The performance review of ministers and other elected representatives of her party that Mamata undertakes periodically is based majorly on feedback provided by the I-PAC.

The I-PAC functions as a parallel machinery and power centre, and it has become so powerful that even senior bureaucrats and ministers are scared of the agency, which, for all practical purposes, is an extra-Constitutional authority and wields power without responsibility.

Prashant Kishor’s, and the I-PAC’s, power and influence grew exponentially after the Trinamool’s stunning victory in the Assembly elections a few months ago. So much so that even Mamata’s closest ministerial colleagues have become wary of Kishor and have started deferring to him. They know he has the Chief Minister’s ears and, even more, enjoys the complete confidence of Abhishek Banerjee.

And since Mamata Banerjee is closest to Abhishek, who enjoys her complete confidence, Kishor’s influence over the Chief Minister is unparalleled.

The rise in influence and power of the I-PAC and its head—Prashant Kishor—has been gradual and planned.

This is how it began

Kishor was asked by Mamata Banerjee in early June 2019 to find out the reasons behind the rise of the BJP in Bengal and the consequent erosion in popular support for Trinamool. He was asked to identify the specific reasons for large sections of the people turning away from the Trinamool and suggest concrete measures to not only win back the support that the Trinamool had lost, but also enhance the Trinamool’s standing among the masses.

The ultimate brief given to Kishor was to ensure Trinamool’s comfortable win in the 2021 Assembly polls. He had two years’ time for the task.

Kishor set about the massive task in a well-planned manner. He inducted a huge number of young men and women in I-PAC, many of them with degrees in business management, public administration and other specialised subjects from top institutions of the country.

Many were also recruited directly from corporate houses; there are a number of I-PAC executives who have left high-paying jobs in banking, investment firms and corporate houses to join Kishor’s organisation.

I-PAC executives were deputed to carry out intensive surveys all over the state on performance of Trinamool’s elected representatives, people’s perception of these representatives, and the reasons behind public disapproval or disgruntlement with the Trinamool.

I-PAC teams were also tasked with reviewing the performance of all government officials from the Block Development Officers (BDOs) upwards and preparing report cards on each of them.

The I-PAC executives visited each and every hamlet, village, town and city in the state to collect a humongous amount of data detailing the performance, public perception, assets and other relevant details of not only elected representatives of the Trinamool, but also key office-bearers of the party.

A similar exercise was carried out for government officials, especially those posted in key departments. So meticulous was the survey that it even covered the hidden or benami assets of Trinamool functionaries and leaders, as well as government officials.

All these report cards and findings of the intensive surveys carried out right from the panchayat level upwards were collated and submitted to Mamata Banerjee. After that, Kishor held exhaustive meetings with Mamata and her nephew Abhishek, where these surveys and reports were discussed threadbare.

And based on all this feedback on Trinamool functionaries and government officials, a comprehensive strategy was chalked out to effect a turnaround in Trinamool’s public image, improve government delivery mechanism and also chart out new social sector schemes and doles.

Many party functionaries, including MLAs, as well as government officials, were put on notice. That triggered a fair bit of apprehension amongst many Trinamool leaders that they will be denied tickets, thus leading to quite a number of them joining the BJP. But that’s another story.

It is based on the exhaustive surveys and feedback from the masses that Mamata Banerjee, with Kishor’s help, crafted her electoral strategy. I-PAC teams were closely involved in implementation of the strategy at the ground level.

Kishor’s teams micro-managed the election campaign and all Trinamool candidates had to listen to their directives. I-PAC executives accompanied Trinamool candidates on their campaign trails and not only advised them on what to say, wear and how to conduct themselves, but also continuously collected feedback from the electorate to recraft the poll campaign at the local level whenever necessary.

They were, in effect, given carte blanche by Banerjee. All Trinamool candidates, including even senior ministers, were told to act according to the suggestions of the I-PAC teams in their constituencies and extend complete cooperation to the teams.

The plan worked and the Trinamool virtually swept the polls. That led to Kishor’s stock rising phenomenally and Banerjee’s dependence on him only increased manifold.

Consequently, the I-PAC has become an integral, though extra-Constitutional, part of the bureaucracy and political framework in the state.

I-PAC teams are now permanently posted in block, sub-division and district headquarters and also at the zila parishads and municipalities. Their exercise of reaching out to the masses, getting feedback from them about their representatives as well as local level government officials, collating all reports for presentation to Mamata Banerjee has become a continuous process.

The I-PAC teams operate professionally and the entire organisation in Bengal is structured like a corporate entity that functions seamlessly. They reach out to the masses to know their perceptions, grouses, problems, needs and demands.

I-PAC teams are tasked by Mamata Banerjee to prepare periodic report cards on bureaucrats, ministers and other elected representatives belonging to the Trinamool. I-PAC executives reach out to not only the masses, but also civil society leaders, NGOs, academics, businessmen, industrialists and a cross-section of society to collect feedback on the performance of ministers, elected representatives and bureaucrats.

The teams also monitor the performance of government schemes and projects and provide feedback on them, suggesting various means by which the projects and schemes can be made more effective. They identify bottlenecks in implementation of the many welfare schemes launched by Mamata Banerjee.

All this makes them powerful entities. Kishor, today, has more say in the government and the party than many top bureaucrats and ministers.

But then, Kishor and I-PAC are extra-Constitutional entities who operate behind the scenes and exercise tremendous power without any mandate or accountability.

“They (I-PAC) wield enormous powers and have a major say in the functioning of the government. They keep bureaucrats and ministers on their toes. But they are not accountable to anyone except Mamata Banerjee. The danger lies in the absolute power that Prashant Kishor and his team has been given. We should remember the adage ‘power corrupts, absolute power corrupts absolutely’. A Frankenstein’s monster has been created and that bodes ill for democracy and the state,” a senior IAS officer who retired as the chief secretary of Bengal told Swarajya.

All other institutions like the bureaucracy, the political executive, the legislature and even the judiciary are accountable and are subject to internal checks and balances. But Kishor and the I-PAC are not.

There is brewing resentment within the bureaucracy and the party (Trinamool) against the I-PAC’s clout. But since Kishor enjoys the confidence of the Chief Minister, no one can muster the courage to speak out. At least not as yet.