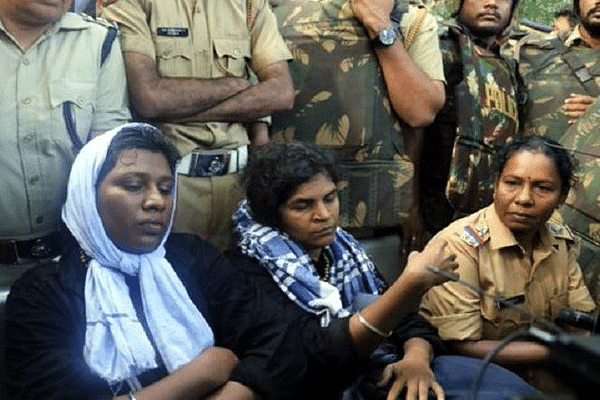 The Communist Party of India (Marxist)–ruled government in Kerala seems to be claiming a pyrrhic victory over two women, Bindu Ammini and Kanaka Durga, entering the Sabarimala Ayyappa temple on Wednesday (2 January 2019). Bindu, hailing from Koyilandy in Kozhikode district, and Kanaka, from the Muslim-dominated Malappuram district in Kerala, entered the sanctum sanctorum at 3.45 am.

Both these women, who are in their 40s, had attempted to enter the temple earlier on 23 December when Ayyappa devotees had stopped them. Bindu and Kanaka are activists and it goes against Kerala police’s earlier statement that it would not help activists to enter the temple.

One of the two women, Bindu, is a Maoist activist and even has criminal cases pending against her.

The CPI(M)-led Left Democratic Front (LDF) government of Pinarayi Vijayan seems to have planned the entry of women diligently. There could be two reasons why the LDF has resorted to this extreme step that has left millions of Hindus hurt and shocked.

One reason is the response to the “Wall of Resistance” organised by the CPI(M) in Kerala on 1 January. Responses to the resistance were mixed with many Muslim women surprisingly coming out to seek the right of Hindu women to enter the Sabarimala Ayyappa temple or against patriarchy. At some places, the participation was poor.

The other reason is that perhaps Prime Minister Narendra Modi’s statement that political parties should not compare his government’s efforts to make triple talaq, prevalent in the Islamic society, as unlawful with resistance to the entry of women of reproductive age into the Ayyappa temple at Sabarimala.

With Modi making it clear that there is a clear distinction between the two issues that amounts to the Centre’s support for the resistance, the Pinarayi government probably got swinging.

Two women in their 40s prayed at #Sabarimala on Wednesday, becoming the first female pilgrims of menstruating age to have achieved the feat after the Supreme Court overturned a traditional ban on women's entry last year. pic.twitter.com/Rnp45FDP6q

The exercise seems to have been well-planned. First, the women were clad in black from head to toe. Also, police, disguised as devotees, accompanied them.

Some say the two were whisked inside the temple on the pretext that they were transgenders.

The video also shows the women being hurried to the ramp in front of the sanctum sanctorum rather than being taken to the front. Clearly, there was a plan, more to hurt the sentiments than actually ensuring equality for women.

This episode of the women’s entry and exit from the temple being videographed is another proof of a well worked-out plan.

If the Vijayan government wanted to ensure equality for women, he and his officials should have made the women climb the 18 steps, take the flight of steps to the sanctum sanctorum, got down, and faced the deity from the first row.

The women are not seen carrying the irumudi bag with two compartments with rice and ghee-filled coconuts. This is another indicator that the LDF government’s plan was to force the women’s entry by hook or crook.

The video also gives away how hollow the attempt has been with one of the two telling the police that she couldn’t stand before the deity.

Probably, these women have been rushed through the ramp, where the third row of devotees have a darshan (view) of Ayyappa. The plan becomes more obvious when the women are taken out through an entry that had been blocked through the season.

#SaveSabarimalaTradition WOW! What concern by the escort. She is so angry they could not take better Selfies or others did not take good pictures.
Sharing as received! pic.twitter.com/OcCzLHKAaO

From the sanctum sanctorum, pilgrims were directed to the Maligai Purathu Amman Temple premises all these days. But as the videos show, the women have been asked to climb down a flight of stairs that take people out to the rest houses nearby.

Kanaka’s brother has, according to Janam TV, said the CPI(M) and Kottayam Superintendent of Police Harishankar had helped both the women enter the Sabarimala shrine. Four devotees had also attempted to stop these two at Erumeli Dharma Sastha temple but in vain.

Once the women’s entry was confirmed through closed-circuit televisions, the temple’s Tantri shut it for an hour to perform “punyavaham” or rituals to cleanse the temple of any harm that might have been caused by the entry of these two women. The temple was re-opened an hour after the rituals were performed.

The performing of the rituals looks like a warning that has been sounded out to the Pinarayi government that the temple administration would not hesitate to challenge its actions.

The entry of two women has now resulted in a law and order problem in Kerala with protests erupting across the state. Black flags were shown to State Devaswom Minister Kadakampally Surendran at Guruvayur, while Health Minister Shylaja suffered a similar protest at Kannur. A dawn-to-dusk hartal (strike) has also been called for on Thursday (3 January), turning the entire affair a murky one.

However, the Pinarayi government has shown more urgency to implement the 28 September 2018 Supreme Court ruling to allow women of all ages to enter the Ayyappa temple at Sabarimala. The CPI(M)–ruled government, probably, has also attempted to make the petitions in appeal against the 28 September ruling infructuous.

The Supreme Court will take up the appeals on 22 January and the Kerala government could maybe argue that the issue is infructuous now that Bindu and Kanaka have made it, albeit in a questionable manner.