How The BLS-BSY Fight Is Hurting The BJP In Karnataka 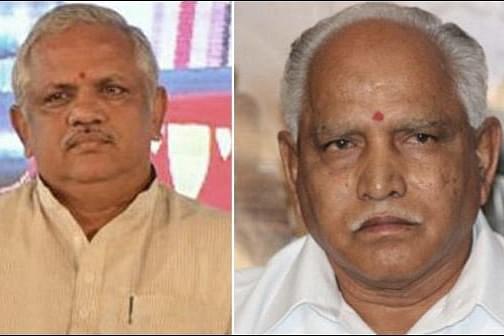 B L Santhosh and B S Yeddyurappa

The 2018 elections in Karnataka saw the Bharatiya Janata Party (BJP) getting 104 seats, and although it emerged as the single largest party in the state, it fell short of the majority mark by eight. The party was, however, hopeful of getting the numbers with the help of outside support, but all it managed to do was stay in power for a single day.

Since then and until now, the BJP in Karnataka has tried out several adventures, but it would only be fair to say that success has eluded the party. It all began with the Karnataka election result, where the performance of the party especially in Bengaluru city came under question. From 16 seats in 2008 to 12 in 2013 and 11 in 2018 - these statistics do not exactly paint a pretty picture.

The Bengaluru woes have not ended for the party and even in the recently held mayoral elections, the BJP was unable to install its candidate, despite being the single largest party in BBMP. In this election, it went wrong right from the start. The party painted a poor picture as it conceded defeat and walked out.

The strategy of the BJP was nothing to tom-tom about and right from the time proceedings began, it became clear that the party was staring at defeat. Proceedings began with six of the BJP’s new found allies keeping the party in the dark. Four switched sides and one abstained. Only one of the allies stayed with the party. The end result was the Congress candidate Gangambike Mallikarjun being elected Mayor and Janata Dal (Secular)‘s Ramila Umashankar bagging the post of Deputy Mayor.

A Series Of Setbacks

The Mayoral poll was the third major setback for the BJP in recent months. It began with the party not being able to muster up the numbers to form the government in the state in May. A week back, the BJP retreated from the council by-elections. An attempt to bring down the Congress- JD(S) government also failed, especially after the party claimed the support of a large number of disgruntled MLAs. In this context it would also be important to mention that the BJP had announced a candidate for speaker of the legislative assembly. However, it pulled out when the proceedings began.

And lastly, as mentioned before, it could not secure the post of the mayor even though being only seven short of the magic number of 130 in the BBMP Council.

These incidents only indicate that all is not well within the party and the age old bug of infighting within the state unit still continues. In the midst of this, a cryptic post on Facebook by the party national joint secretary B L Santhosh has become a matter of debate.

He posted, “those who do not believe in team spirit and not ready to share laurels cannot achieve success.” Party insiders tell Swarajya, that the post clearly points towards the lack of strategy and team spirit within the party. It also indicates that he is clearly upset with the former deputy chief minister of the state, R Ashoka, who has been a long standing MLA from Bengaluru. A lot was dependent on him to secure a large number of seats from Bengaluru and also ensure that the party won the mayoral polls. On both counts, he had failed.

The tug of war between Santhosh and B S Yeddyurappa is a well-known one. There is talk that Santhosh is an aspirant for the post of chief minister. However, Yeddyurappa did manage to keep him out of state affairs when the election process began in Karnataka. The tensions between the two leaders is well known and it was the party’s national chief, Amit Shah who had to finally step in and coax Santhosh to stay away at least until the 2019 elections are over.

Santhosh may have stayed away, but has been very vocal when it came to giving feedback about the party. Some of the issues that Santhosh has pointed out is the lack of strategy and also the need to look into Ashok’as role in Bengaluru. However, Yeddyurappa has rallied behind Ashoka and continues to trust him where Bengaluru affairs are concerned and this has not gone down too well with a section of the party leaders.

The series of setbacks have given Yeddyurappa’s rivals a reason to complain. Those within the Sadananda Gowda camp who also back Santhosh are particularly upset with Ashoka. They even question as to why Yeddyurappa continued to back him despite his shortcomings. This camp has even asked why many leaders were not taken into confidence while planning the strategy. However, post the mayoral poll debacle, Yeddyurappa was quick to defend Ashoka and this yet again has not gone down well with many in the party.

For the BJP’s big southern push ahead of 2019, Karnataka is a crucial state. Among all the southern states, the party is the strongest in Karnataka and hence it becomes important for the party to win big here.

In the 2014 elections, the party, despite all its internal differences within the state unit, had put up quite an impressive performance in Karnataka. It bagged 17 out of the 28 Lok Sabha seats in the state. The Congress and JD(S) bagged nine and two, respectively. However, one must remember that in 2014, the party rode the Modi wave. The question is will it be the same in 2019?

The BJP hopes to bag at least 20 seats, but there are several hurdles ahead.

First and foremost, the recent happenings in the party where it has failed on several occasions does not paint a pretty picture.

Secondly, it is most likely to fight a combine of the Congress and JD(S). The BJP has lost all the recently held by-elections including the one at Jayanagar in Bengaluru to the JD(S)-Congress combine. Even in the recently concluded local body polls, the Congress-JD(S) combine came to hurt the BJP. The Congress won 982 of the 2,662 seats, while the BJP bagged 929. However, the turning point was the JD(S) with 375 seats deciding to support the Congress. B S Yeddyurappa even acknowledged that the coalition had come in the way. He said that the BJP should have won more seats, but the party could not perform the way it wanted because of the Congress-JD(S) coalition. He, however, added that the peoples’ mandate was with the BJP and they would win big in 2019.

BJP sources say that it would not exactly be easy. The real issue for them at the moment is not the coming together of the Congress and JD(S) but the infighting that is hurting the unit.

Yeddyurappa will refuse to take along the likes of Santhosh and his set of supporters. On the other hand, it is not clear if Santhosh will go all out and back Yeddyurappa’s efforts even if there is a stern message from the top brass of the party from Delhi.

The BJP is hopeful that the party’s top brass would step in yet again and sort out these differences. Recently, Shah advised the state unit to sincerely play the role of the opposition and not create any confusion. Yeddyurappa said that he had been told by Shah not to create any confusion and also not to speak about the political developments in the state.

In the end, even if a truce is reached before the 2019 elections, it would once again be temporary.