How The Waving Of Chinese, Pakistani Flags On Indian Soil Reflects The New Kashmiri Narrative 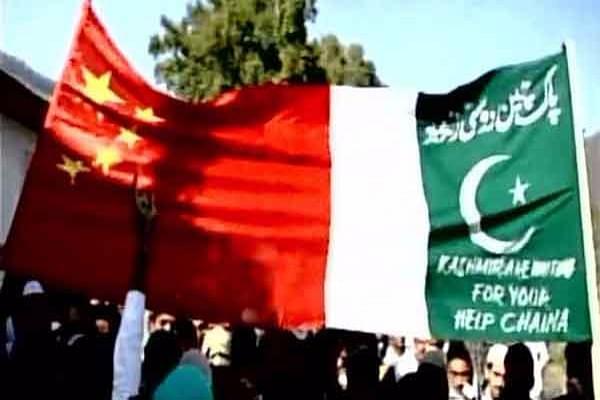 The eighth BRICS summit in Goa had its anti-India reverberations in the Kashmir Valley. Anti-national elements in Baramulla hoisted Pakistani and Chinese flags after Friday prayers. This coincided with the arrival of Xi Jinping on the Indian soil. The coincidence was lost out on none. The messaging for China’s help by the separatists and the militants in Baramulla injects a new dimension to militancy and jihad in Kashmir.

Invariably, all anti-national demonstrations in the Valley are staged after Friday prayers. Prayers have become a passport or vehicle to violence. When prayers are abused for anti-national activities, it is indicative of the abysmal level that a society has sunk to. It is the level of self-destruction. A society that compromises with the sanctity of religious arena and its ancestors will never have love for the land. On this very land, how many kinds of flags have been waved or hoisted – flag of Islamic State, of Lashkar-e-Taiba, of Pakistan and now of China? What kind of Kashmiriyat is this and what kind of Islam?

The youth of the Valley could be least concerned or aware about an international meet on the Indian soil in Goa. The flag hoisting, it is well understood, has been orchestrated by Pakistan and with the backing of China. Jihadis in Kashmir are now trying to intimidate India by flexing the China card. It is an attempt to sell out Kashmiri land to a new buyer. China is desperate to see the China-Pakistan Economic Corridor (CPEC) through. It is desperate for the corridor to make strategic thrust into the Persian Gulf by way of Gwadar. It therefore needs the land of Pakistan, as well as of Jammu and Kashmir (J&K).

In J&K, to be more specific, China needs the land of Gilgit-Baltistan. This is the land of India inhabited by the Shia majority, who has fought alone the depredations of Islamabad since 1947. Majority in that land love India. In the year 1980, an erudite gentleman from Kargil, now a pilot, went to Gilgit-Baltistan to meet his relatives, separated after the 1947-48 war in J&K. He found that every signboard carrying the name of a place were in Devanagari script (Hindi), apart from the Arabic script and English. The Devanagari feature was added by the locals in the fond and certain hope that it would assist the Indian Army once it came to their rescue from the clutches of Pakistan. There was a practice in every home of Gilgit-Baltistan to make 10 additional roti (bread) in anticipation of the Indian Army.

It is to assist the Chinese in the CPEC that Chinese flags have been hoisted in the Valley. It is indeed true that the Kashmir Valley never had any soulful linkage with the other parts of J&K, like Jammu, Kargil, Leh-Ladakh and Gilgit-Baltistan. All Chief Ministers of J&K have been Valley-centric. All of them have also been Pakistan-centric, as if there were no borders with China. The China facet of J&K was left entirely to New Delhi. This has been a strategic ploy to ingratiate Pakistan.

Partly, this attitude of the Valley-oriented administration and leaders could be attributed to the geographical isolation and harsh terrain of the high-altitude regions. New Delhi too is guilty of having being seduced by the pro-Pakistan Chief Ministers in this regard. Army formation commanders posted in the state confined themselves to their respective areas of operational responsibility, and never treated the State as one integral geographical entity.

The same narrative impacted people outside J&K, who thought that the Valley – constituting only 7 per cent of the area – was the entire State. The cumulative consequence of these narratives was that the country’s leadership and instruments of governance had come to treat the present territorial arrangement of J&K between India and Pakistan as fate-accompli. Gilgit-Baltistan, without which the CPEC is not possible, occupied an increasingly blurred space in their mental and strategic horizon. The result was Kargil.

The surgical strike on Pakistan-occupied Kashmir (PoK) terror camps may have disabused this mindset. The nearly 800km Line of Control, when treated with a holistic and offensive perspective, has reincarnated itself as a strategic bonanza, because of the magnitude of cross LoC options it generates and the infinite deception methods it offers.

LoC is no longer a burdensome defensive proposition.

We now need to accept the reality that a new poison has been injected in the J&K discourse, i.e., China and CPEC. Now, not formally, but in reality and effect, J&K has become an area of strategic competition between three countries. It is also a foregone consequence that such a strategic competition arising out of China’s thrust to Persian Gulf, running parallel and close to the Indian frontier, will be contested not only by India but other powers as well. This may be the new geopolitical reality bearing on J&K.

If the CPEC becomes a reality, it would become a critical lifeline for Western China. As a matter of fact, entire Pakistan would have become a lifeline for Western China. It needs to be underscored that the CPEC, which is essentially a strategic linkage between Pakistan and China, is predicated on PoK. Being an Indian territory, PoK has collaterals with J&K as a whole, thus causing grave anxiety in China and Pakistan.

What is reprehensible and unpardonable is that some of the Kashmiris in the Valley, on behalf of whole of J&K, have taken it upon themselves to further China’s strategic interests vis-à-vis India.

The CPEC is not only a territorial embrace between Pakistan and China, but it has also engendered a strategic partnership between Islamists and communists. This strategic partnership manifested in the hoisting of the Chinese flag in Baramulla and earlier in the form of anti-India slogans in the Jawaharlal Nehru University (JNU).

Why would, then, China want Masood Azhar and his Jaish-e-Mohammed to come in the harm’s way internationally? Similarly, why would the separatists in Kashmir and the communists in India want Masood Azhar to suffer? Among the people, most rattled by India’s surgical strike in PoK have been the communists, who are now on an overdrive to push India into ‘talks’ with Pakistan.

Only recently have the intelligence agencies in India warned that the jihadis controlled by Pakistan and the Maoists have planned to coordinate their activities and operations in India’s hinterland. This has been vindicated a week later by the arrest of six Maoists in Noida, in the National Capital Region. These Maoists belong to different states and are adept at assembling bombs. Reportedly, they were planning some major attacks in and around the national capital. Possibly, one of their targets was Hindon Airbase.

Both China and Pakistan are ideological states. Both are leveraging on their ideological constituents within India. These constituents also comprise Maoists and the jihadis respectively. Their convergence has dangerous consequences. India’s undoing has been that we did not crush these foreign ideologies. We did not develop any counter ideology.

For some reason, could be due to reasons of suffering slave status for years, we have always been shy or apprehensive about evolving an uncompromising nationalist ideology. Indeed, if we had, China’s and Pakistan’s proxies would not have made the daring tryst in JNU, and nobody would have dared to hoist China’s and Pakistan’s flags in Baramulla.

In the absence of a cogent nationalist ideology, the psychological and physical unity of the country will continue to suffer.

RSN Singh is a former military intelligence officer who later served in the Research and Analysis Wing, or R&AW and author of books Asian Strategic and Military Perspective and The Military Factor in Pakistan. His latest book is The Unmaking of Nepal.