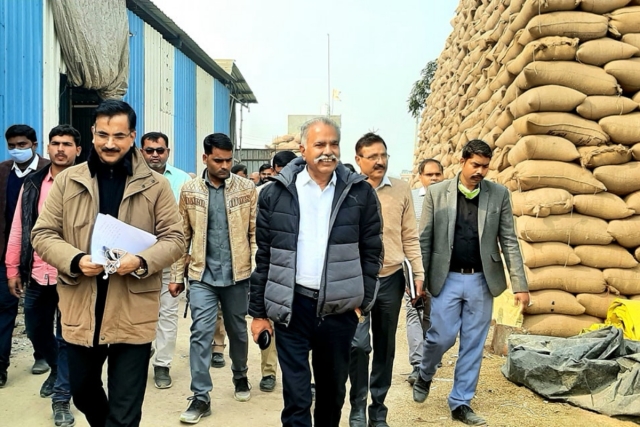 Uttar Pradesh Minister of State for Food and Civil Supplies Ranvendra Pratap Singh has said that the state is witnessing a strong crackdown on people involved in discrepancies in paddy procurement.

Singh spoke to Swarajya over the phone. He has said that the crackdown has been possible owing to the directions from UP Chief Minister Yogi Adityanath against corrupt practices.

He said, "The series of actions on people involved in discrepancies is huge — the biggest since Independence..."

Singh said, "It is one of the biggest series of actions against discrepancies and irregularities in the paddy procurement process in UP. Ab tak ka sabse badaa. Vibhaagi karyavaahi ki gayee hai in logon ke khilaf (departmental enquiries have been carried out against the people involved. I will release the numbers soon."

Singh added that action has been taken against more than 1,200 people in the state and that efforts are on to make direct procurement smooth for the farmers.

Last year, Adityanath had issued directions for smooth paddy procurement in the state. He had said that the farmers should not face any difficulty during the paddy and sugarcane procurement season.

Singh has emerged as a prominent face in Adityanath's action on discrepancies in paddy procurement in the state.

He has made surprise visits across districts in eastern UP to get his own view of the situation. The visits will continue in the coming days.

The visits include a surprise visit to a paddy procurement centre in Barabanki district (UP) — recently. This is how he describes the particular centre he visited: "wo bhrashtth se zyada brashtth kendra hai... (more corrupt that the corrupt).

At the particular procurement centre in Barabanki, he got hold of the register which carries the entries of farmers who have sold their produce. He conducted a crosscheck to see "whether the details and names of farmers are valid or not".

He took the contact details of names, which were said to be of farmers and were mentioned in that particular register. He picked some numbers randomly and made phone calls to these numbers. The numbers turned out to be of different people.

In this video, he can be seen speaking out a name and saying: Aapne dhaan-vaan kuchh becha hai (have you sold paddy)?" Seemingly, there is some response from the other end.

After a pause he adds, "Apne dhaan nahin becha hai...". He holds the phone away from his ear, waiting for a person from his team to take down details emerging from the call.

The enquiries revealed discrepancies in the records kept at the centre. He stumbled upon them during his interactions, as the people answering calls on more than a dozen numbers he dialled, hung up on the minister, as soon as they heard his name.

Seemingly admonishing people at the centre, he is heard saying in the video: "Agar yahan do bori chali jayegi kisan ki, char bori chali jayegi, to kaun zimmerdaar hoga? (Who will be responsible if the gunny bags of the produce from farmers go missing)?"

Farmers have reportedly made allegations of the flouting of rules at the procurement centre.

A man, seemingly a farmer, alleges in the video that turns for weighing the produce are compromised against rules depending on the influence of farmers.

He questions why the kattas (gunny bags — each having a quintal's capacity) weighing 80-90-150 quintals are being weighed on days that are allotted for the weighing of the produce from "chhote kisan" (farmers who bring lesser produce) — by the SDM for their convenience.

He adds that he got 30 quintals of produce to the centre on the day allotted to small farmers such as him. "Jo dabang hain unki tol hoti hai, jo dabang nahin hain unki tol nahin hoti hai (those who are influential succeed in getting their produce weighed and those who are not, don't)."

Reportedly, farmers alleged that they are not allowed to sell the produce and "the middlemen brought it for lower prices before selling it back at the nominated MSP to the procurement centre."

More surprise popped up. Reportedly, one person he made a phone call to, even said that he has no agricultural land.

Singh said that he had not come across "itna brashtth" (this corrupt) centre among the 50 centres in the 11-12 districts he had visited so far. He assured action and assured the farmers that the situation would change beginning that day itself and he would make arrangements towards bettering the situation.

Interestingly, Barabanki was in the news for "slow" paddy procurement in December 2020. The report mentions that Member of Parliament from Barabanki, Upendra Singh Rawat, took up the matter.

Rawat and the local MLA made visits to the market to address the situation. The issue came to the notice of Adityanath.

When this author spoke to Singh, he had returned from a tour of Azamgarh and Basti districts.

He told Swarajya that he felt relieved to discover that the farmers of Azamgarh and Basti have a good level of awareness. "kisaan bahut jaagruk hai Purvanchal ka mujhe aisa laga Basti aur Azamgarh mein. Wo apna kisee tarh nuksaan bardashth nahin karta mujhe dekhkar achcha laga (I felt glad to notice that the aware farmer of Azamgarh and Basti will not tolerate any kind of loss on any account in paddy procurement.")

This report quotes Singh as saying that his perception that paddy procurement would be done in the right manner in Barabanki, considering its proximity to Lucknow, was wrong.

He urged the SDM to register a case for false procurement.

He visited Rani Sati Industries Mill in the Safdarjung Market area and found discrepancies there as well. He has ordered an enquiry under a special committee and said that the matter will be taken to CM Adityanath.

The paddy procurement season is tapering towards an end. In districts in Purvanchal, Singh informs, it will end in February.

Singh will head to Bundelkhand next. He say, "The paddy situation has bettered in Bundelkhand this year." He said that he will take steps to ensure that the procurement season ends well for farmers in Bundelkhand.