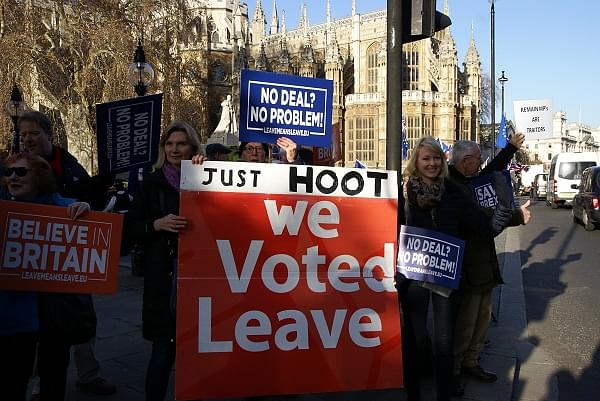 Just as India was coming to terms with the shock of the Delhi riots, timed perfectly to synchronise with US President Donald Trump's visit, came another jolt.

Almost all of the media and some bodies in the West launched a calumnious attack on the Indian government over the Citizenship Amendment Act (CAA) and the riots.

While Wall Street Journal notoriously fudged the testimony of victim Ankit Sharma's brother, others like BBC simply omitted the mention of the most gruesome killing in the Delhi riots.

All the reporting in mainstream Western media stayed silent on the barbaric mob attack on the police force which left a constable dead, another senior officer struggling for his life and 55 other cops injured.

The biggest mischief perpetrated by the media, however, was the narrative claiming the riots to be a ‘pogrom engineered by Hindus’.

For a riot started by Muslims after days of preparation, this atrocious lie, actually, turned the facts on their head.

As for the fact that police was seen charging from the side of Hindu neighbourhoods, it had more to do with the nature of riots in India.

Like with most of the previous communal riots, which begin with Muslim mobs targeting Hindu neighbourhoods, the police had no other option but to assist the besieged Hindu localities.

A push-back with the help of hugely outnumbered crowds is a standard control mechanism in India to ensure least possible casualties.

Several videos, which have since emerged, show that in Delhi also, the riot started when large Muslim crowds began charging at Hindu localities with only a few Hindus on the streets to resist them.

The only other option for the police in such conditions would have been to open heavy fire on Muslim rioters, resulting in far greater casualties.

But even an exercise of minimal use of force was castigated by Western media as an act of ‘partisanship’. In fact, Western media completely ignored the remarkable restraint shown by various police forces in dealing with the protesters, particularly women.

If the malicious media coverage, and the selectively picking up of stories midway through the riots took India by surprise, the criticism of the Citizenship Amendment Act in certain circles was equally stunning.

In a House of Lords debate, the British government called the Act ‘divisive’ and ‘discriminatory’.

Earlier, voting on a European Union resolution criticising the Act was deferred till March end.

In another outrageous move, the United Nations Human Rights Council, having several member states with terrible human rights records, has approached the Supreme Court of India as an ‘aggrieved party’ against CAA.

Various outlets in the Western media have also carried articles critical of CAA.

But, if the Citizenship Amendment Act, which seeks to grant citizenship to refugees fleeing religious persecution, is termed ‘discriminatory and divisive’, what is the Western record?

Are there no examples of citizenship or refuge-enabling provisions to specific communities in Western legislatures?

While the 1965 Immigration and Nationality Act in the United States authorised the grant of asylum on the basis of ‘race, religion, nationality, membership in a particular social group, or political opinion’ to refugees coming from East European Communist regimes and Middle Eastern monarchies, the Refugee Act of 1980 proposed by Edward Kennedy further broadened the scope of benefit to Indo-Chinese refugees from Vietnam and Jews from Soviet Union.

The Act was further amended in 2004 through the Specter Amendment when provisions were added to fast-track citizenship to Bahais, Christians and Jews escaping from Iran.

Similarly, in 1972, the United Kingdom constituted the Uganda Resettlement Board to expedite refuge and settlement of Asians fleeing persecution at the hands of Uganda's Idi Amin regime.

The hugely complex British nationality laws, which classify citizenship into six categories, are themselves discriminatory when they restrict the right of abode in the UK to only one category and exempt only two categories from immigration control.

It is amusing that British lawmakers, who have criticised India for differentiating between immigrants and barring the naturalisation of Muslim illegals, are yet to respond to the growing chorus for converting the British National Overseas status of their Hong Kong subjects to full citizenship.

Protests to this effect have been repeatedly held in front of the British consulate in Hong Kong.

But the supreme irony in the charade, which saw House of Lords members demand that India absorb ‘all the immigrants’ — refugee or illegal, lay in the fact that the United Kingdom itself, in one of the biggest political upheavals of our times, has pulled out of European Union over the vexatious issue of refugees.

Among the European countries, the UK has been accused of being the harshest in treating its refugees. At one-third of the European average, UK has the lowest asylum approval rates, despite receiving only 3 per cent of the total asylum requests.

According to a report in The Independent, even after release orders from courts, many immigrants continue to live in detention centres which have been criticised for their unhealthy conditions because the UK Home Office believes housing in these centres is similar to ‘emergency housing’.

While in India, the feverish imagination of some journalists has equated detention centres with ‘concentration camps’, the same centres in UK, which detain 25,000 illegal immigrants every year, have been reported to be worse than prisons.

Not only do these Western countries have legal provisions to deport illegals, they have dedicated immigration task forces for the same. All these countries have national registers of citizens and some have even digitised them.

The stringency with which the West approaches illegal immigration is demonstrated by the fact that the darling of liberals, Barack Obama, deported 2.5 million people in a span of six years.

The contention is not that the Western countries were wrong in framing their refugee policy and dealings with illegal immigrants. Every sovereign country has the right to grant refuge and check illegal immigration. The point is to call out the hypocrisy.

By ignoring continuous persecution of minorities in Pakistan and attacking India over a humane law, these Western agencies have not only betrayed their malice but chosen to run down Indian sovereignty and democracy.