If Maharashtra Sees A Midterm Election, Sena Will Be The Biggest Loser 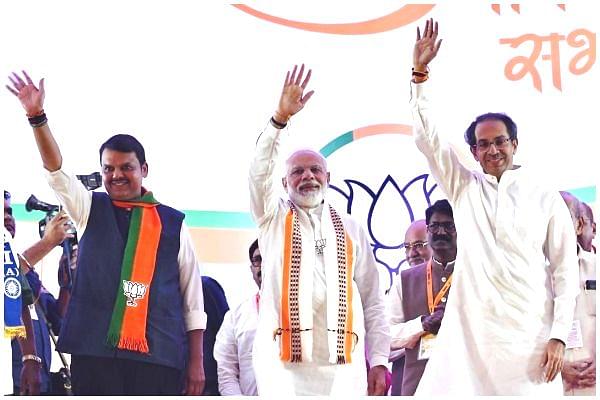 With the Bharatiya Janata Party declining the Maharashtra Governor’s invitation to form the government and with Shiv Sena Union minister Arvind Sawant resigning from the National Democratic Alliance (NDA) cabinet, the durable, if not uncomfortable alliance of the BJP and Shiv Sena seems officially over.

The point of no return was reached last week only when caretaking Chief Minister Devendra Fadnavis launched a scathing attack on his alliance partner. The CM categorically denied any talks about sharing the chief minister’s post with the Shiv Sena.

He also made his displeasure known over the personal attacks on senior BJP leaders, including Prime Minster Narendra Modi. Shiv Sena supremo Uddhav Thackeray indulged in a broadside of his own, saying his party can’t work with “liars”.

The anger among traditional BJP voters is both palpable and understandable. The two parties campaigned together during the Lok Sabha polls as well as the state Assembly elections.

While Shiv Sena had always been somewhat of a cantankerous ally, after the pre-poll alliance, it was expected that government formation itself would pose no challenge as long as the combined tally crossed 144.

That BJP with 105 MLAs will not cede to Sena’s demand for sharing the CM’s post was clear from day one.

However, assisted by some shameful cheerleading from the Marathi mainstream media, as well as some deft behind-the-scenes string-pulling by the wily Nationalist Congress Party (NCP) boss Sharad Pawar, Shiv Sena might just get the CM’s post it so badly wants.

Pawar earlier clarified that any decision to back/enter into an alliance with the Shiv Sena will only be taken after consultation with the Congress.

Even assuming the Shiv Sena capitalises on the UPA allies’ natural desire to keep the BJP out of power, and secures their support, the durability of such support is highly circumspect.

Shiv Sena will also have to face a 105-MLA-strong BJP as a belligerent opposition for its entire tenure.

With the compulsions of coalition politics gone, BJP might decide to give their former ally a taste of its own medicine from a far stronger position.

The present floor strength of all four parties indicate that any government other than the BJP holding the CM’s post, with Shiv Sena as partner, is extremely unlikely to serve out a full term.

Therefore, based on present circumstances, we may have to consider the possibility of a mid-term election sooner or later.

In such a scenario, Shiv Sena will either have to stitch an alliance with the UPA allies, thus sharing the seat-pie three ways instead of the two-ways arrangement that caused it so much pain, or fight the BJP and the NCP-Congress combine at the same time.

It is difficult to see how either of the above scenario strengthens the Shiv Sena’s position from present.

Ever since the Sena showed its first signs of rebellion, the mainstream Marathi media has been solidly behind them.

Knowing how rabidly opposed to the BJP the Marathi mainstream media is, it is not difficult to understand the reason for this sudden surge in support.

Whether this support will sustain in case of a three-way fight, i.e. where Shiv Sena is fighting the NCP-Congress as well as the BJP, is difficult to tell, though history is not with the Shiv Sena on this count.

The biggest problem for Shiv Sena and the Thackerays is, however, one of perception.

They are seen, whether fairly or not, being responsible for turning a straight-forward verdict into a political mess that might impose another costly mid-term election on the state that is struggling with myriad economic and socio-political issues.

Many also suspect that Uddhav’s personal wish to see his son Aaditya as the CM is at the root of this tussle, and thus see it as yet another example of nepotism in politics at the cost of the common man.

If there is one common theme underlying elections the world over, it is that voters don’t take disrespect of their mandate lightly.

Clearly, the balance of power between the two NDA allies is markedly different from what it was during the time of late Balasaheb Thackeray.

Fighting this election for the first time on lesser number of seats than the BJP might have triggered Uddhav’s survival instinct, thereby necessitating this move. However, brinksmanship of the kind requires extremely fine balance and clarity of purpose.