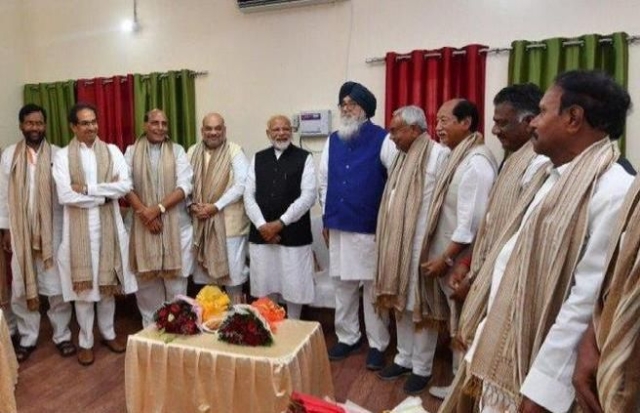 The fact that political parties have already begun preliminary parleys even when there are two more rounds of polling to go suggests that almost no alliance or party is sure of a clear win on 23 May. In recent days, the BJP’s Ram Madhav has said that his party will get a majority with allies – which means the BJP does not see itself repeating a single-party majority this time. The stock market has been crashing over the last six sessions, which suggests that smart money is hedging its bets, possibly based on some privately leaked early exit polls. The exit polls will come on 19 May, and the results four days later.

While there is almost no political activity around a possible UPA-3 headed by Rahul Gandhi, the confabulations for a Third Front have already begun. Both Chandrababu Naidu of Telugu Desam and the son of Chief Minister K Chandrashekar Rao, K T Rama Rao (representing the Telangana Rashtra Samiti), have met Kerala Chief Minister Pinarayi Vijayan for a non-BJP, non-Congress alternative.

What is significant is that both likely gainers (TRS) and losers (TDP) are talking to a party that too is likely to slip in Kerala (the CPI-M), and fall further in West Bengal and (possibly) Tripura. The Left Front won eight seats in 2014 to UDF’s 12 in Kerala, but with Sabarimala likely to benefit the BJP at least in terms of vote share, it is the UDF which may gain a seat or two at the Left’s expense.

On the other hand, the likely gainers in Andhra Pradesh and Telangana are talking of evolving a joint front – a Federal Front. Parties that will support a Rahul Gandhi-led Congress party are few, and they include the DMK, RJD, JD(S), NCP and TDP. But the parties which are against the idea of a Congress-led front are the biggies, and they include Mayawati and Mamata Banerjee, though the latter is slipping in West Bengal. And as long as Mayawati calls the shots in the Mahagathbandhan, even Akhilesh Yadav will not openly back the Congress.

On the other side of the equation, while Shiv Sena, Janata Dal (U), Akali Dal, LJP, AIADMK and PMK are with the NDA for now, the last three of them may have very few seats in 2019. The only regional party in the grey zone is Naveen Patnaik of BJD, but if the BJP makes substantial gains in Odisha, the possibility of his backing the NDA will be bleak. At best he may offer mild outside support to any front that forms a government.

This leads us to a simple proposition: while the betting should still be on an NDA return to power, if it falls far short of the halfway mark (ie, below 230 seats, 42 short of a majority), the probabilities will shift in favour of a United Front-2 rather than a UPA-3.

An NDA seriously short of a majority (if it is just 10-30 seats short, it will probably rope in some regional parties to its side) will not lead to a Congress-led coalition (ie, UPA-3). It will have to be a regional front, backed from the outside by the Congress, as had happened in 1996-98, when Deve Gowda and I K Gujral became prime ministers.

The logic against UPA-3 is simple: in no calculation is the Congress likely to cross 90 seats, since the only area of gains for it are Rajasthan, Madhya Pradesh, Chhattisgarh, Maharashtra and Gujarat, and in many of these states the Narendra Modi vote is strong. If we give the Congress 40 more seats, it will reach 80-90 this time. It cannot lead a coalition with such meagre numbers, for its strength would not be more than two strong regional parties put together, and at least two major regional parties (Trinamool and BSP) will be against it.

The dynamics of a Third Front are also different from that of a UPA-3. A Third Front supported by the Congress from the outside will need the Congress party’s concurrence on the PM, which means Mayawati or Mamata or KCR may not be acceptable. The logic of a multi-party coalition of equals demands that the leader be soft and pliable, which automatically eliminates people like Mayawati. A Mamata or KCR may be more acceptable, but the Congress party may prefer a weaker leader with no base so that it can pull the plug whenever it smells an opportunity. The only leader with a base who the Congress may not have a problem with is the BJD’s Patnaik, since he is mild-mannered and non-controversial. This will also enable the Congress to seek the BJD’s vote bank in Odisha once Patnaik is gone.

So here’s my take before the last two rounds of polling.

#2: UF-2 is a 25 per cent possibility if #1 does not happen for whatever reason. If UF-2 comes to power, the BJP-led NDA can hope for a comeback after two years, as Vajpayee did in 1998. In fact, NDA-3 becomes attractive even to potential supporters of UF-2 because it means a clear five years in power. In short, the mere possibility of a UF-2 may make NDA-3 more realistic even if the numbers look weak for it.

#3: UPA-3 is most unlikely no matter how the vote goes.