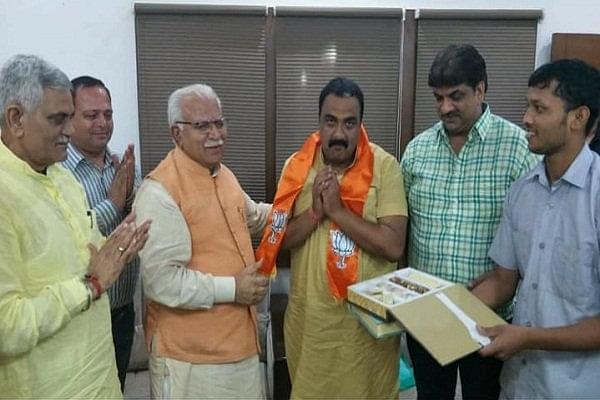 The air in Jind is full of loud, blaring speakers. A kaleidoscope of various colours shimmer atop pillars, and political calculations are at the tip of everyone’s tongue, from the chaiwala (tea vendor) to election managers, in different capacities, of course.

The old city of Jind, which first tasted significant infrastructure development only a few years ago, is going to polls on 28 January. A month ago, the so-called “semi-final” to the Haryana Legislative Assembly election of 2019 played out in the name of civic polls, which the Bharatiya Janata Party (BJP) swept with large margins. However, Jind, which takes pride in calling itself the ‘heartland of Haryana state politics’, is at it again.

In an election year, one constituency affects another. In that spirit, Congress party spokesperson Randeep Surjewala and younger brother of Hisar Member of Parliament Dushyant Chautala, Digvijay Singh Chautala are in the election fray. Surjewala is a Member of Legislative Assembly (MLA) from Kaithal and a long-time politician.

Digvijay comes from the Chautala family of Sirsa, which has maintained a clout in Haryana politics since the state was founded in 1966. The political party, or rather the family, is now split into two factions, Jannayak Janata Party (JJP) and its parent party, Indian National Lok Dal (INLD).

Both these candidates are not native to Jind constituency and have done a good job at raising the stakes. However, the man who both these politicians are trying hard to defeat is the son of late MLA Hari Chand Midha.

Hari Chand Midha was born in Pakistan and later settled in Jind. He joined the Indian Army in the Signal Corps and soon shifted to Army Medical Corps around the Sino-India war of 1962. After retirement from the army, he engaged in social service and started a clinic to serve the local populace of Jind and neighbouring villages.

Soon, words of his service and goodwill in his profession started spreading far. Such was his stature that villagers from distant lands and peculiar ailments would say, “Mujhe toh Midha ki dawa hi lagegi (Only Midha’s medicine will work for me)”.

This life of service has benefited and humbled his younger son, Dr Krishan Midha, who is fighting his first election on the BJP ticket in Jind. An Ayurvedic doctor by profession, Dr Midha, along with his father, oversaw more than 300 patients in the outpatient department of his clinic. After his father injured his knee, it was Dr Midha who took the lead in political dealings.

I visited the clinic a few days ago. It is situated in the Punjabi bazaar of Jind. From the busy main bazaar road, one has to get on a narrow lane for the clinic. Electric wires crisscross and dangle over, and the road underneath is half-paved. Fifty yards into the alley, a dusty, blue-coloured building on either side is the Midha Clinic.

The clinic runs on bare minimal facilities – no fancy beds, no air conditioners, and no long forms or applications. And the footfall is a little low now because of the election humdrum, yet the family keeps the clinic running.

Apart from the to-do’s and whatabouts on different diseases, it is information about health camps and Shivir posters that adorn the wall. Dr Midha’s cousin prompts, “We have organised over 130 Shivirs in the region. We see this as a service to the masses. Our role in community service and nation building.”

Dr Midha used to work long hours for his father and has now evolved into a star campaigner. Justifying its name as the ‘heartland of Haryana Politics’, elections at the Jind have now turned into a high-stakes battle when Congress field Surjewala and INLD give the party ticket to local leader Umed Singh Redhu.

INLD suffered a huge blow when Dr Midha joined the BJP a few months ago. Being vocal about his preferences, Dr Midha said he believes aligning with the BJP will help him lift the constituency.

Jind, since its inception, has been in the middle of a turf war between the INLD and Congress. The report card for both parties has little to show on any effective upliftment of the region. Dr Midha has now become a frontrunner in this political race.

The JJP and Congress have been working to cut across voter base, and the INLD is fighting to keep its core voter base intact. The village votes seem to be divided between the four prominent parties. The majority urban votes, however, swing towards the BJP.

The voting results will be announced on the thirty-first of this month. Whoever wins this election will walk confidently towards the Lok Sabha and Vidhan Sabha elections.