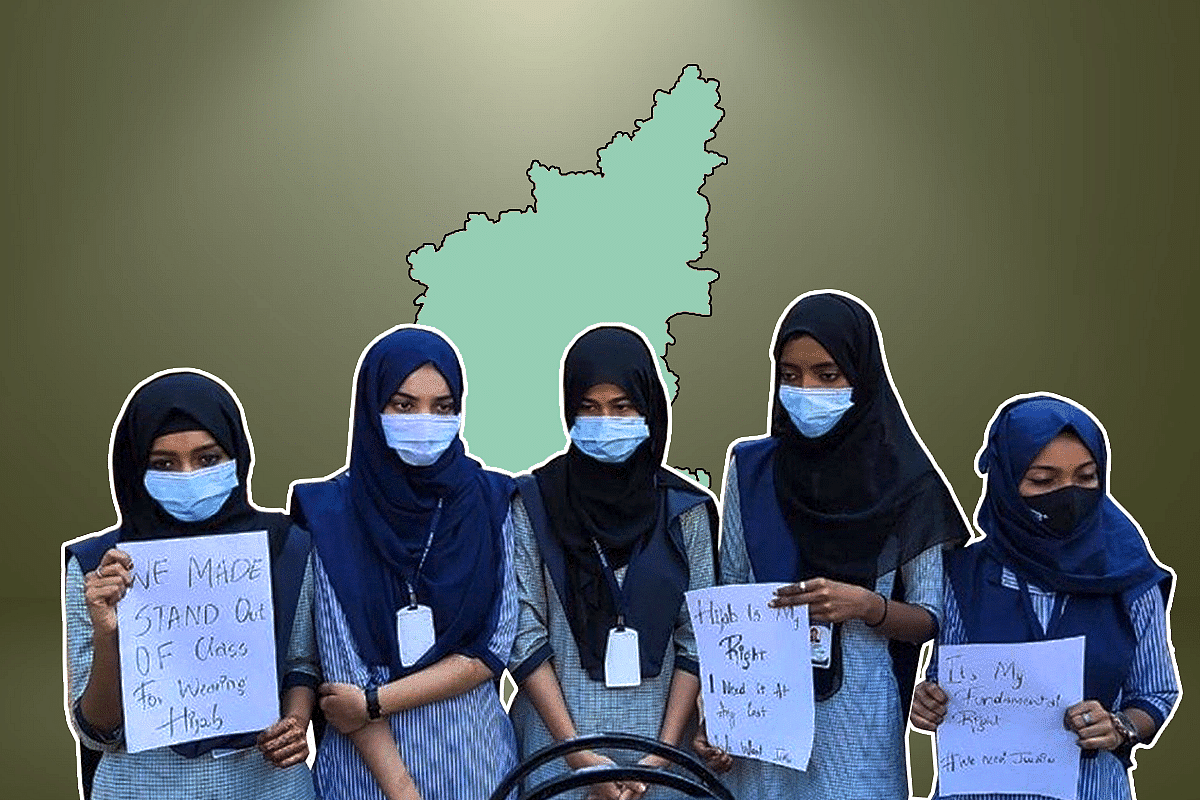 There are few sights more disturbing than temples of wisdom and centres of learning turning into fortresses guarded by policemen. But that is what has greeted us here in Udupi and Mangaluru today. Thanks to six girls who decided that they wouldnt enter class if they could‘nt wear their religious identity on their sleeve or rather around their heads, thousands of young minds have been drawn into an ugly needless debate.

Educational institutions that were finally heaving a sigh of relief with students being back on campus after a long pandemic hiatus, had to yet again shut doors last week, thanks to six women who decided to hold the entire system to ransom.

What was essentially the unwillingness of six girls who until then had attended classes like all others, turned into a ‘fight for rights’. And those that today want to champion this ’cause’ wish to ignore the fact that it is the very section of the community that is denying their girl children the right to study that is the one using them as scapegoats to fight an ugly battle.

How does one accuse the government of denying these young women their rights when all it asked was to let status quo be maintained?

If it intended to ‘lock girls out of schools’ would the school try to convince children and talk them out of this psuedo-battle? Would they be giving them an option of attending online-classes until this matter can be amicably resolved? Would it call clerics and leaders of their own community to talk to the students and parents?

What do you call those, that had until then, followed the rules of the school, attended classes in the prescribed way, deciding one fine day that they would not do so? Rebellion is productive when it isnt an act of sabotage spearheaded by vested interests.

‘Let the students have the Darshan of their teachers’ appealed an advocate on behalf of the petitioners five days ago and irony died a brutal death for it was these very students who justified the sporting of the veil inside the classroom as, reportedly, they didnt want the teachers(male) to ‘have their darshan’.

The very argument seeking an interim order permiting them to attend classes with the Hijab was that the children should not be deprived of education. But this was what the school had also tried to reign in on the children.

That there were very few days of the academic year left and exams were fast approaching. That they should focus on their studies rather than engage in a fight with the administration. That they shouldn’t deprive themselves of an opportunity to learn, equip themselves for the future and to fight their own battles and that the special committee would arrive at this decision before the next academic year.

But that was not to be.

Despite a hundred other Muslim girl students in the college and their parents not wanting to sacrifice education at the altar of religion, politicisation of the debate left very little option. Despite proof which include a testimony by one of the students to a Muslim leader himself that they had been asked to attend training sessions, that they had been instructed to voice specific opinions, certain sections of the media chose to conveniently ignore these facts.

“Men from right wing groups” didnt decide to wake up one morning and wear saffron scalves and scream Jai Shri Ram at random “young girls” as accuse some erudite minds penning opinion pieces in international publications. If the reaction is being called an inorganic one, with what naïveté is the action that led to it being called an organic one.

That a few girls refused to solve the issue amicably with a discussion between all stakeholders (multiple attempts for which were initiated by the college) that they chose to take to the media reiterating the same few lines, that they involve the government and turn a disciplinary issue into a constitutional battle doesnt make it a ‘battle against Islamophobia’ but one against the ‘rules of the land and the institution’ which they agreed to abide by and had been doing all these years.

Whether the hijab is a ‘guard against rapes’ as a four time elected member of Karnataka’s legislative assembly almost made it to be, and such other patriarchal ideas of ‘modesty of women’ or the choice of women to don it and exercise their ‘right of religious practice’, it surely isnt and shouldn’t be a tool to arm-twist the system.

Equating the prescribed code of dress that exists in a certain institution to the choice of clothing by leaders in public life is plain stupid. When did the chief minister’s office prescribe a dress code last? What justifies this desperate attempt to rope in the CM of a state(conveniently going into election) and what he wears as a monk (which technically is his adhering to the ‘dress code’ of the mutt that he is the head of) into this Hijab issue? Or does it unfortunately give away the real intention of the way this issue has blown up to the scale it has?

The bigotry is what hits the hardest. Conveniently, the CFI becomes holier than thou even after it issuing statements that it’s wont stop until the govt relents. But the ABVP which has distanced itself cant seek such privileges. That Haji Abdul Majid and Rajjab were arrested from around the protest site for carrying ‘lethal weapons’ is underplayed but a clipping of a group of college students screaming Jai Shri Ram to a girl in a burkha is branded ‘a jeering mob of young Hindu men wearing saffron scarves’ heckling a ‘college student’.

For all these years, if no one cared about defying college rules, why now? By using the hijab as a tool of mass mobilisation among Muslim women, these agencies behind it have unfortunately pushed the community back in time for their own peril.