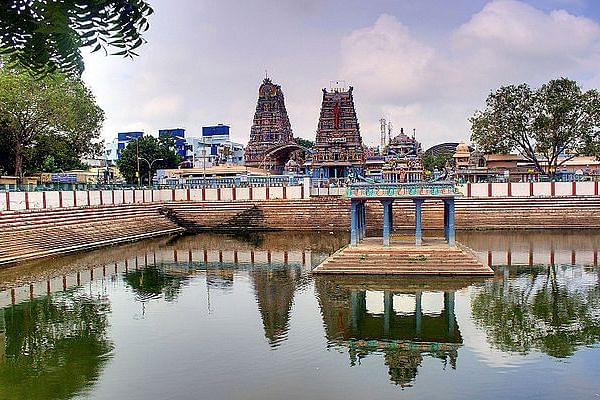 In 2012, the Tamil Nadu Hindu Religious and Charitable Endowments (HR&CE) Department decided to put up a dais on the second floor of its head office on Mahatma Gandhi or Nungambakkam High Road in Chennai. For this purpose, the HR&CE Department decided to take a sum of Rs 2.19 lakh from Arulmigu Vadapalani Andavar or Murugan Temple funds in August that year.

In the second half of that year, the HR&CE Department decided to construct a reception hall for its donors. In addition, it decided to alter the entrance and decorate the HR&CE Commissioner’s office. The Vadapalani Murugan temple was tapped again for the purpose.

In November 2012, the HR&CE Department withdrew Rs 4.95 lakh for this purpose, and in January 2013, another tranche of Rs 5 lakh was withdrawn from the Vadapalani Murugan Temple.

A year earlier in February 2011, the Tamil Nadu government asked the Vadapalani temple to contribute Rs 30 lakh for its scheme to ensure that pujas are held at least once a day in some of the temples that are short on funds.

The Vadapalani Murugan temple was again to contribute Rs 20 lakh for the same scheme in March 2015. An additional Rs 10 lakh was taken from the temple’s funds in June 2016.

This is over a 10-year period starting 2006-07. It is likely that more of the temple’s money could have been taken by the Tamil Nadu government before 2006-07 and also in the last two years.

There are more examples of how the HR&CE Department has taken funds from temples. A meeting of the department was scheduled on 19 September 2016 at the HR&CE head office.

For this, an official, signing on behalf of the commissioner, asked the Vadapalani Murugan temple to bear the expenses for the meeting. The temple was asked to pay for 50 grams of pakoda, tea/coffee, mini-meals, tea, and mixture for 50 persons who were to take part in the meeting.

Interestingly, the official communication said that the temple officials had been given permission to spend money from the temple’s funds for the meeting.

Expenses included payment for 200 Aquafina water 200 ml bottles and 20 bottles of 500 ml. The order also asked the temple officials to hand over 20 AA-sized batteries to the K section of the department.

Last year, the Mylapore Sri Kapaleeswarar Temple was asked to bear the expenses for a similar meeting on 19 January. Some 270 HR&CE Department staff took part in the meeting, chaired by the commissioner.

The HR&CE Department has said that funds from the temples have been availed of by it as per Section 36 of HR&CE Act. But this is what Section 36 says:

With the previous sanction of 1[the Commissioner], and subject to such conditions and restrictions as may be prescribed, the trustee of a religious institutions may appropriate for any of the purposes specified in sub-section (1) of section 66...

It says that if the provisions of sub-section (1) of Section 66 are satisfied, then the department could allocate any portion of accumulated surplus of a temple.

The surplus comes into account only after the temple makes provisions for incurring its own expenditure, besides allocating funds for its maintenance, liabilities, repairs, and renovation.

Sub-section (1) of Section 66 says that a joint or deputy commissioner of the department can allocate funds of a temple to another institution or temple that is poor or needy.

The issue of the HR&CE Department taking funds from temple isn’t confined to the Vadapalani Murugan Temple or the Mylapore Kapaleeswarar Temple. For the scheme to conduct pujas at least once a day in temples that have poor income, most of the temples that have good income have been assigned to meet a portion of the total funds for the scheme.

While the diversion of funds of temples with better income for the scheme to conduct pujas in other temples is questionable in itself, the utilisation of such funds for the department is unlawful.

This is because the utilisation doesn’t fulfill what Section 36 read with Section 66 of HR&CE Act says. According to Ramesh, this amounts to criminal breach of trust that will attract Section 409 of the Indian Penal Code for government staff of the Department.

This would mean that if anyone goes to the court challenging the diversion of funds, the official who has authorised such a diversion could even get a life term under Section 409.

So far, the diversion of temple funds for HR&CE Department buildings and constructions or its meeting has not been challenged. But with more details of diversion coming to light, it is only a matter of time before it is challenged in court.