India 75@75: Case For Smaller States Has Never Been As Convincing As Now 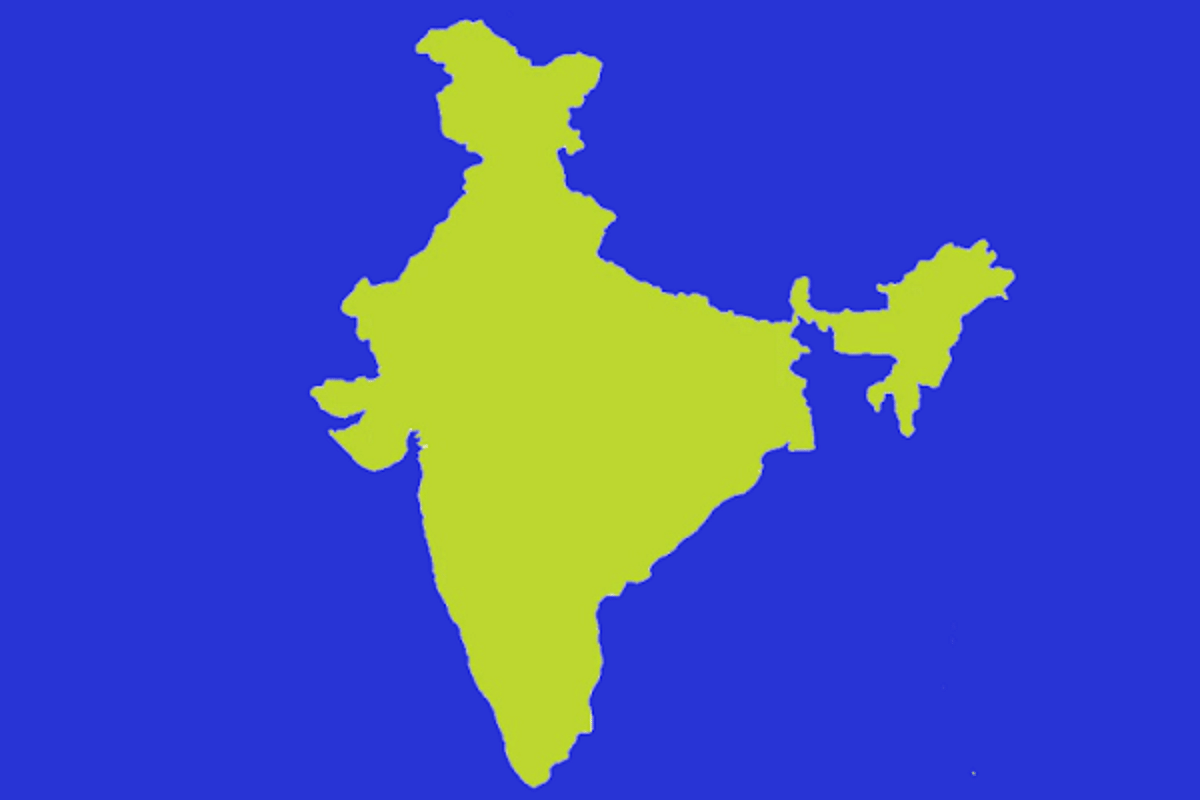 The map of India.

India has 28 states and eight Union Territories today. In terms of population each state has on an average 49 million people. The equivalent numbers in the US with its 50 states, and Switzerland with its 26 cantons are 6.5 million and 330,192 people.

Clearly, our states are too big simply in terms of the voice that a citizen has in our representative democracy.

The origin of these states is a curious mix of our colonial history and subsequent developments wherein certain deeply felt needs to affirm local identities coupled with the Union’s responses to strategic and administrative concerns came together.

The colonial legacy gave us a patchwork of areas directly administered by the British (British India), and other areas, the princely states, which though nominally ruled by their royals, had no real sovereignty of their own in any constitutional sense.

It was clear even in 1947 that the administrative distinctions between the provinces of British India and the princely states would have to go. Sardar Vallabhbhai Patel was the first to move in this direction and did away with the idea of respecting any paramountcy that the princes might have enjoyed in the days of the British Raj. The necessary empowerment was given to the Union through Article 3 of our Constitution, a provision that remains unchanged till today.

It was also evident that some of the presidencies of the Raj were too large and diversified leading to a cumbersome and inefficient administrative set-up. Smaller states are always easier to administer.

The British had, in their time, separated Bihar, Orissa and Assam from Bengal, and Sindh from Bombay. The first major new state in independent India came about when the Andhra and Rayalaseema regions of Madras were separated in 1953 and further expanded through the States Reorganisation Act (1956) to include all Telugu speaking areas of the country in a new state Andhra Pradesh.

The concept of linguistic states was thus born and it proved to be a resilient template for many decades, especially in southern India and also in the division of Bombay into Maharashtra and Gujarat in 1960.

The division of Punjab into Punjab, Haryana and Himachal Pradesh in 1966 was born out of the demand to create a homeland for the Sikhs but even so, the unspoken strategic need to have a small state on our western border with a troublesome even inimical neighbour was simultaneously and silently satisfied.

The division of Assam into seven North East states followed natural impulses driven by cultural, ethnic and linguistic differences in this crucial region and was accomplished smoothly over a period of 40 years with some of these ‘seven sisters’ proceeding through a UT status before achieving full statehood.

The first move away from linguistic states occurred when Uttarakhand was hived off from Uttar Pradesh in 2000. Chattisgarh and Jharkhand are similar although one notes that the demand for a separate Jharkhand is more than 100 years old, dating back to the colonial era.

Major realignment of state boundaries almost always followed from agitations that arose from deep-seated feelings of establishing what were felt to be genuine regional identities that had a true cultural, historical or societal basis. The case of Telangana is surely exemplary, also because the two portions of Andhra Pradesh that were created in 2014 are of comparable size (unlike Uttarakhand and Uttar Pradesh).

Karnataka is an interesting example in point and one can consider it as a case study. The modern state had its beginnings in the princely state of Mysore, a dominion that was noteworthy for its highly progressive administration that emphasised social, economic, industrial and yet, also Dharmic upliftment of its people.

Other Kannada-speaking areas from the Bombay and Madras presidencies of the erstwhile Raj as also from the princely state of Hyderabad were amalgamated in 1956.

The state has been reasonably well administered over the years and is also politically stable. And yet Umesh Katti, a sitting minister in the present Bharatiya Janata Party (BJP) government, has said that Karnataka will be divided into two and India will have 50 new states after the next Lok Sabha elections.

He further adds that “Prime Minister Narendra Modi himself will take the initiative on this issue”. North Karnataka (or Hyderabad Karnataka), from where Katti hails, is indeed distinct from the southern part, the old Mysore state with its main grid in the Bengaluru-Mandya-Mysuru corridor, in the matter of history, geography, climate, culture, language and diet.

Karnataka is nominally Kannada-speaking but undoubtedly Hindi and Marathi have significant numbers of speakers in the northern parts.

Bengaluru is a virtual polyglot paradise and it is quite easy to live in some newer parts of the city without knowing a single word of Kannada. In any case, it is so close to the Andhra Pradesh and Tamil Nadu state borders that Telugu and Tamil are also well understood.

This brings us to another issue that has cropped up in many large states — one huge metropolitan area develops to the detriment of the rest of the state. In this connection, Katti rightly says that Bengaluru city is overcrowded, and lacks water supply for citizens who have to spend hours in traffic jams.

Katti also said, and in my view rightly so, that it was high time that IT companies thought beyond Bengaluru. The chief casualty in the lopsided development of Bengaluru has been Mysuru, a city of considerable charm and with a potential to become a centre for micro, small and medium enterprises (MSME) and light industry. It remains a neglected Cinderella.

Katti's concerns are mostly well founded and the division of Karnataka into smaller states would almost certainly bring economic development and improve the quality of life of the people.

While we are on this topic one also might consider that there have been long standing demands for separate states for Tulus and Kodavas, very distinct communities from old Mysore and also north Karnataka. So maybe Karnataka needs to be divided not into just two but perhaps three or four smaller, more easily administered states where the true identity of its people would be able to shine, bringing out the federal nature of our polity, a characteristic that is sadly under-emphasised in our strongly Union centric Constitution.

Karnataka has been chosen as a case study but similar arguments apply almost everywhere in India. Agitations for a separate Saurashtra, Vidarbha, Baghelkhand, Harit Pradesh, Kongu Nadu, Gorkhaland and Bodoland are nearly as old as independence.

Uttar Pradesh is a standard example of a state that is so big that it has become unwieldy and inefficient. The case for division of this behemoth state was made by K M Panikkar, the chairperson of the 1955 States Reorganisation Commission. The same call was given by Mayawati when she was the chief minister of the state and Yogi Adityanath in the days before he became chief minister.

To give a telling example, if a state called Doab was created out of the narrow strip of land between the Ganga and the Yamuna roughly between Kannauj and Prayagraj, it would be larger than the 35th most populous country in the world.

To put it simply, India is too big to have just 28-and-odd states plus smaller Union Territories. Is it too unreasonable to ask for 75 smaller states in the Union of India as a gift we give ourselves on this 75th anniversary of our independence?

A nearly automatic response might be to say that more states would lead more easily to fragmentation and disintegration of the country. This might be true in a European nation-state like Yugoslavia and Czechoslovakia (where such a thing has indeed happened) but it is not true in a civilisational state like India.

In India, unity flows from diversity and not the other way round. We are diverse in just about everything except the biggest of things and this is the unique strength of our country. Diversity in India is incompletely and improperly expressed in our present set-up of 28 states and eight UTs. The time for deep-seated change is now.

What in effect I am proposing with 75 states is a countrywide delimitation exercise that will incidentally empower small states economically to a considerable degree.

India is a quasi-federation. Any federation works best when the sizes of the constituent units are equal. The number 75 suggests itself because each new state would have an entirely manageable number of two crore inhabitants. And such an exercise would also fit in well with the proposed expansion of the Lok Sabha. Each new state would have around 10 elected representatives. Such an exercise cannot be done piecemeal nor in response to agitations. It has to be done all at one go, supported by a national consensus on the matter.

It will also need to be accompanied by changes in the system of governance. The Westminster model which has never really suited us would become unmanageable and unwieldy with 75 states. The US system with its strict separation of legislative and executive wings of government and elected chief executives at the centre and in the states might be more appropriate for us.

Abolition of the Rajya Sabha and Legislative Councils, bodies that have been stridently opposed since the days of the Constituent Assembly (1946-1949), might also be timely. Many have felt that the Upper House is an anachronism and that it represents nothing and nobody, certainly not the states it is supposed to represent. I agree.

The creation of new states needs just Article 3 but this is insufficient and actually meaningless without accompanying changes in governance. This would need a new Constituent Assembly, not an unreasonable step, and one from which many other liberal democracies have not shied away.

Our Constitution is not an immutable holy book. It is a man-made volume and it is capable of being changed by other men and women from a newer age to better reflect the aspirations of an India of the future.