India Must Abandon Dhimmitude: From Madrassas To Universities, Two Areas Are Ripe For Detoxification 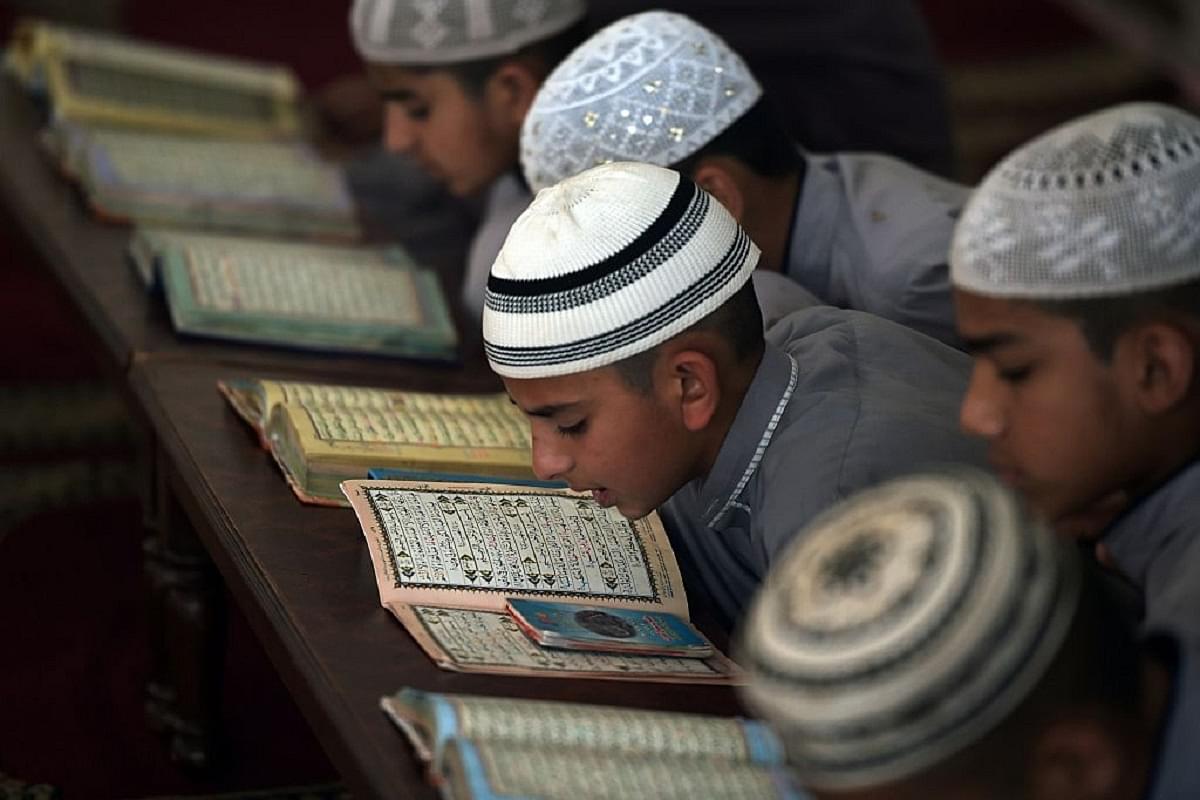 Students at a madrassa. (Getty Images)

The Indian state must shed its pusillanimity and dhimmitude — ie, giving in to Islamist intimidation — by baring its teeth in two areas: one is to create a national plan to de-radicalise Islamist curriculum from madrassas to higher education centres, and the other is by clamping down on radical organisations like the Popular Front of India (PFI) which only seem to be growing bolder by the day.

Mobs of Islamist radicals have not only been screaming on Indian streets shouting ‘Sar Tan Se Juda’, but actually picking off soft targets and executing them. It started with tailor Kanhaiya Lal in Udaipur, went on to the killing of chemist Umesh Kolhe in Maharashtra’s Amravati and has now resulted in the hacking to death of Bharatiya Janata Party (BJP) youth worker Praveen Nettaru in Karnataka’s Dakshina Kannada district.

The Karnataka BJP President Nalin Kumar Kateel’s car was jolted by angry mourners over the essential toothlessness of the law in the face of such murderous mayhem. This anger will ultimately cost the BJP its core constituency: why would any Hindu want to vote for the BJP if it cannot even protect its own cadres effectively?

Soon after ‘Sar Tan Se Juda’ shouts were heard on the streets of many states, Kerala Governor Arif Mohammad Khan pointed out that many madrassas were teaching kids that the punishment for blasphemy is a beheading. This point has been repeatedly confirmed with the multiple calls for beheading Nupur Sharma, and the callers included the Khadim of Ajmer’s Khwaja Moinuddin Chisthi, Salman Chisthi — a shrine which many Hindus too frequent as part of the overall syncretic traditions of Dharmic religions. Chisthi was arrested later, but we must question our generous assumptions about Sufism’s benign nature.

A group of 22 academicians and public intellectuals has now written an open letter to the Prime Minister to take action against the jihadi teachings of Islam in state-funded institutions like Aligarh Muslim University, Jamia Millia, and Hamdard University. They have called into question the ideas of Maulana Abul Ala al-Maududi (1903-1979), founder of the Jamaat-e-Islami. After partition, Maududi went over to Pakistan and played no mean part in the creation of a theocratic Islamist state. Maududi’s views also resulted in the declaration of the Ahmadiyas as a non-Muslim group in Pakistan.

The letter (read the full text here) to the Prime Minister contains the following quotes from Maududi.

“Islam wishes to destroy all states and governments anywhere on the face of the earth which are opposed to the ideology and programme of Islam.…Islam requires the earth - not just a portion, but the whole planet.”

Quoting from Maududi’s book, The Road to Peace and Salvation, the letter says he issued an “open threat to all those who live under democratic systems.”

“None of His (God’s subjects has the right to arrogate to himself the position of a sovereign rule. Nor is any individual or legislative body competent to make laws according to their own whims and caprices and call upon the subjects of God to follow that law instead of the Law of God. Nor does any government have the right to enforce its own authority in disregard of the Divine Authority and require people to obey its own command irrespective of the Divine injunctions…. All these are acts of rebellion: false claims to sovereignty and recognition of these claims both amount to manifest rebellion and those who are guilty of either of these offences are bound to be punished sooner or later.”

Clearly, this implies that no state is legitimate, unless Islamic law is its basis.

“The never-ending violent attacks on Hindu society, culture and civilisation are a direct outcome of such teachings. It is a matter of deep concern that leading Islamic universities are providing a cover of legitimacy and respectability to such ideologies, especially since some prominent Muslim leaders of India have openly declared their determination to Islamise all of post-Partition India by 2047. Since these universities are being supported by public money, we as taxpayers and concerned citizens have a right to demand action against such teachings.”

Given this backdrop, the crying need is to, first, clamp down on Islamist organisations till they abandon the idea of creating a Sharia-compliant Indian state, and simultaneously redo the curricula of Islamic schools and higher education institutions so that they conform to pluralist norms. No university in India should be teaching Islamist supremacy or the ideas of Maududi, unless the focus is on condemning them. Maududi should be taught to Indian Muslims just as Adolf Hitler is in Germany. Maududi’s ideas can only lead to a holocaust.