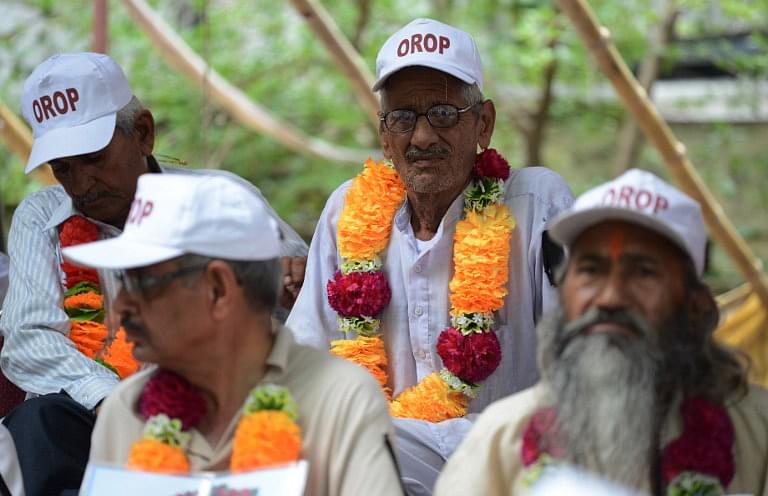 Why an overhaul of recruitment, resettlement and retirement polices for the armed forces is necessary.

How does pension work for central government retirees?

Currently, all civilian retirees (recruited before 2004) and all military retirees earn a monthly pension for life that is based on their pay at the end of their service and years of service. This monthly amount has a fixed component called basic pension (typically 50% of last drawn basic pay) and an inflation-indexed component called Dearness Allowance (DA). Also, every 10 years, there is a government-wide pay increase (called the pay commission), during which salaries of all government servants are increased substantially. Retirees’ basic pension is also increased during pay commission reviews, though not by the same percentage as salaries.

Why don’t we have OROP?

Pension is extremely expensive. In fact, the Central government’s pension budget (~2% of GDP) is about the same as the central government’s defence budget! In other words, it already costs the government just as much to pay its pensioners as it does to pay all currently serving soldiers and maintain all the weapons and bases that guard our borders!

The reason for this is simple – the pension bill keeps ballooning each year for various reasons:

The Indian pension plan is already exceptionally generous because of point #2. In comparison, most countries use a pension scheme that’s based on a simple annuity (i.e. fixed amount), which would be terrible in a high-inflation economy like India. This article explains how there is a ~100% incremental cost between a simple annuity and an inflation-linked annuity!

E.g. In our example, with OROP, Shyam (1998 retiree) alone will cost the government an additional 50,000 per year or approximately ~15% more than he does now! Imagine this delta of ~15% across all retirees from before 2008 and it will be an additional cost in 10,000s of crores per year. The government simply cannot afford OROP for all employees, especially its civilians, who comprise of 75+% of pensioners.

Why is there merit in armed forces personnel wanting OROP?

Almost 80% of armed forced personnel are separated before they are 40 with 13-20 years of service, and another 19% are separated by age 54, as opposed to 60 for civilian officers.

E.g. Let’s consider Vikram, another 25 year old, who joined the Army as a 2nd Lt at the same time Ram joined as an Income Tax Officer (which is a lower rank with lower pay.) Vikram would most likely have been retired as a Lt Col with 20 years of service in 1993. Vikram’s basic pay then would have been ~5,000 (as 1993 was 2 pay commissions before 2008.) Vikram’s basic pension then would have been a mere 2,500, which would have been increased by the 2 subsequent pay commissions to ~14,500. Including current DA, Vikram would now be receiving ~30,000 against Ram’s 37,000 and Shyam’s 32,500. Thus, without OROP, Vikram ends up making far less than his civil service junior because he was discharged early.

Unlike civilian jobs, most military jobs require a high level of fitness, especially in the junior ranks. They also need a clear distinction between enlisted (non-officer) and officer ranks to maintain discipline. Thus, unlike in civilian roles, junior non-officer personnel cannot grow into gazetted/ commissioned roles over time. This requires separation of enlisted (i.e. non-officers) very early – many by the time they are 40.

Plus, almost every army follows a tried-and-tested structure (platoon-company-battalion-brigade-division) that cannot be broken. Around the world, each command position in this structure has a clear officer rank associated with it.

How else do armed forces personnel lose out against civilian counterparts when they get discharged early?

From a monetary standpoint, military officers who are discharged in their 40s and 50s lose out on at least 1/2 their earnings (Pay minus Pension) every month till they are 60. E.g. between 1993 and 2008, Vikram would have lost at least 20 Lacs in income compared to Ram.

Of course, there is the argument that Vikram would have been able-bodied in 1993 and should have found a second job. However, it is not easy in India to switch careers – even for fresh graduates of top MBA programs. For a mid-career soldier, it is beyond difficult, as unlike any corporate or government employee, he has no connection to the private sector. Government jobs are also primarily focused on hiring entry-level candidates, beyond cursory quotas for ex-servicemen (which by the way, come with a significant pay-cut and demotion in rank.)

The enlisted ranks have it the worst. Unlike officers, who could still use their education and leadership experience to at least take on security/ administration roles in private companies, the enlisted have neither the education nor transferable skills (if they have primarily had a combat role) to bank on.

So, OROP seems like the least we can do for armed forces retirees. Why not do it?

Short answer – OROP is not enough. It is unforgivable that people who have spent their youth defending this country will have to embrace the austere life of a retiree so early in life. It is unconscionable that the Government of India feels no sense of duty to ensure that they have a career post their military service. OROP is a band-aid on a broken arm. It may drive a placebo effect or at best provide extremely expensive temporary relief, but it does nothing to help the fundamental flaws in the system.

What should be done instead?

There needs to be an overhaul of recruitment, resettlement and retirement polices for the armed forces to ensure that every single soldier and officer has the ability to serve the government till he is 60, if he so wishes.

The current policy of recruiting career officers is not in sync with the fact that a majority of officer roles are at the company level, which an average officer will outgrow in (at max) 12 years. The default recruitment policy should be a Short-Service Commission with a commitment of 8 years of service. This would allow 3 years of training and 5 years of service at company leadership levels. Junior Commissioned Officers such as Subedars can fill any gaps at the platoon leadership level, as they do in the Central Armed Police Forces. Post these initial 8 years, the government should confirm employment till 60 years of age (not exactly in the military) for all officers whom it chooses to keep.

A 8 year Short Service Commission has several benefits – 1) it enables those who want a career in the Army to do so without (a) worrying about being stuck in it for life if they don’t like it, and (b) being asked to leave 15 years down the line, when they have fewer options in life, and 2) it ensures that those with the potential to be battalion commanders are picked up and are given the right opportunities to move up.

Enlisted ranks should be given two options upon completing their 10 years – either a career (till 58/60) in the armed police (either Central Armed Police Forces or state Provincial Armed Constabulary) or an opportunity to attend a college of their choice (provided they can get in), fully funded by the Defence Ministry. (The US GI bill does exactly the latter.) While many may choose to go to college, the former will also have more than enough takers from those who wish to serve the country. With hundreds of battalions, CISF, BSF and CRPF alone can absorb almost all enlisted discharged. In fact, these can be veteran-only forces, with Sr. NCOs/ JCOs also entering laterally from the armed forces into Inspector/ AC roles.

Officers who do not pass the 8 year filter should be given an option to pursue a 2 year advanced degree/ MBA/ secondment in a PSU/willing corporates (with full pay) to learn and to develop lateral skills to set them up for life.

Retirement benefits should kick in at the age of 60 for all veterans who passed the 8/10 year filter. Those who choose to stay in government service post their discharge should be able to earn a pension based on their last government salary, even if it were a civilian salary. This will ensure that all forces personnel get their well-deserved pension (on par with/ better than their civilian counterparts.)

How much will it cost?

I have not done the math, but this should lead to a cost reduction from the status quo for the central government! This is because every single Central Armed Police Force is spending money in recruiting, training and employing fresh civilians, while people who have those exact same skills are being paid to be retirees! The government can eliminate this waste with next to no effort. In addition, the government will also save by deferring gratuity and other lumpsum payments by 15-20 years for those who choose to remain in civilian service. A hidden benefit is that an actually short SSC will attract enough qualified young men to plug the officer shortage in the Indian military.

In summary, OROP is a burden on the exchequer and does nothing to address the fundamental issues with the HR policies of the Indian armed forces. India’s veterans deserve more.

This is an edited and updated version of a post first published at subfusced.blogsopt.in on August 16, 2015.