Inside The Village Of Shabnam, The First Woman Likely To Be Hanged In Independent India 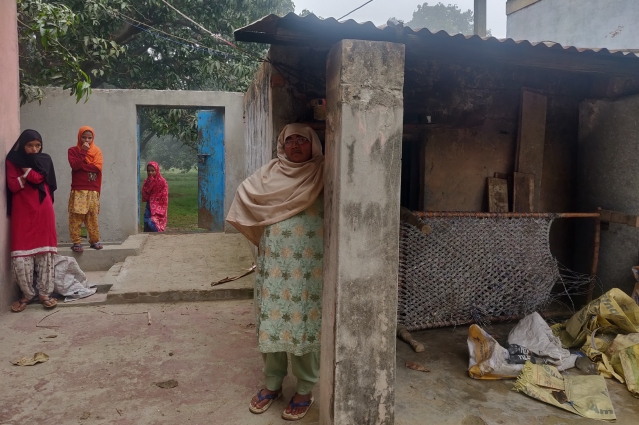 Her aunt Fatima at Shabnam’s house. (Pictures clicked on 19 February 2021)

Uttar Pradesh, Amroha district, Hasanpur Tehsil, 19 February 2021: I get out of my cab to ask for directions to Bawan Khedi village. The first person who responds – he is the owner of a men’s salon nearby – smiles and says the house I want to go to is right behind me.

“City folks like you come here only for Shabnam,” the man, who introduces himself as Abdul Qadeer Salmani, says laughingly.

Another man, an elderly, requests me to talk to “villagers” before going to that house.

By now, more than 50 people have gathered at the spot. The men hint I go inside the salon and talk. The salon is a one-room structure, facing the main road.

“The collective opinion of the village is that Shabnam should not be hanged,” says the elderly man, who introduces himself as Mohammad Shahid from Pathan community.

Everyone around nods in support.

A man, Shere Zabaan, also a Pathan, says, “that Sattar Ali and his wife Fatima have illegally laid claim to Shabnam’s house. If she gets hanged, it will be lottery for them.”

Aged 27 then, Shabnam killed seven members of her own family including her parents with the help of her boyfriend Saleem. Villagers have differing opinions on this theory, but Shabnam and Saleem were convicted for murder in 2010 by a sessions court. The court awarded them a death sentence. In 2015, Supreme Court upheld the death penalty.

Shabnam’s mercy petition was recently turned down by the state governor and the President of India. As per reports, preparations are already underway at the Mathura Jail to execute her.

“She can spend her entire life behind bars, but we do not support her hanging,” says Shere Zabaan. “Once she is gone for good, Sattar won’t give an inch of Shabnam’s family property to her son.”

As per villagers, Sattar, who is younger brother of Shabnam’s father Shaukat Ali, had separated from the family long time ago, but returned to Bawan Khedi after the heinous murders to usurp the property.

Much has been built up about the “property” now. I head towards Shabnam’s house across the road.

A large, rusting iron gate located on the main road opens into a sprawling compound. A woman is tending to buffaloes while three girls are playing near her. With me, a large crowd of villagers has also stepped inside.

The woman, who villagers say is Fatima, sees the crowd and gets back to her work.

Several villagers say they saw the bodies lying in blood of pool. Umair Khan says that in the wee hours of 15 April 2008, Shabnam had begun screaming from the house, prompting people to come to the spot. “Throats of six of them, except the baby, had been slit. There was blood all over. Shabnam was sitting in the compound and crying,” he says.

Shabnam kept saying she was in the bathroom and had seen no one, he says. “We all believed her story then,” says Umair.

An Indian Express report of 2015 quotes R P Gupta, a police officer, who investigated the cases, as saying that he doubted Shabnam’s statement the moment he saw the beds on which the victims lay.

“The sheets were crumpled but not the way they would have been had the victims thrashed about while they were being attacked. So when I took the bodies for post-mortem, I asked the doctor if it was possible that they had been drugged. We had recovered an empty strip of 10 tablets of nashilee goliyan (Biopose) so I had my doubts. And sure enough…” the officer, now retired, told the Express.

Later, doctors found traces of tranquiliser diazepam in the viscera of bodies of six people except the baby’s. Prosecution argued that Shabnam had drugged them all the previous night.

The police also found that Shabnam and Saleem has constantly been on the phone between 7.30 pm and 1.09 am on the intervening night of April 14-15. The two again spoke at 2.09 am. Both were arrested within a week.

Shabnam, yet unmarried, was seven-weeks pregnant at that time. The police identified the weapon of murder as an axe which they said Saleem had later hidden near a pond. They said it was Shabnam who had carried out the killings.

Villagers recall Shaukat Ali as one of the most respected men in Bawan Khedi. Ali taught arts at Taharpur Intermediate College and was so-called “Masterji” by all. They also recall him as a soft-spoken, mild-mannered person. Shabnam was his only daughter.

The family belonged to Saifi community, that has around a hundred houses in this all-Muslim village with an estimated population of 3,500. Saifis are traditionally into furniture-making, also called badhai. Saleem is from the Pathan community that dominates the village and is considered superior to Saifis.

There was, however, significant difference in the educational and financial status of families of Shabnam and Saleem.

“Shaukat was a teacher. His wife was also educated. Anees was an engineer while Rashid was a final year student of engineering. Shabnam is a double MA [masters in Arts in English and Geography],” says a resident, Irfan.

“That’s not all. Shabnam’s family has a lot of property elsewhere. Worth at least 25-30 lakh. Then there’s this big house with two floors. And an adjoining 100 bigha agricultural land with fruit trees.”

Saleem, a school dropout, came from a poor family and worked at a furniture factory.

Villagers have their own versions of the motive of the murders. “Shabnam was not beautiful at all. She was dark complexioned and quite short in height. Rashid had no reason to be interested in her if not for her wealth,” says Umair. “Probably she wanted all the property to herself so that she could convince Saleem to marry her.”

Another resident says it was Saleem who had an eye on her property, and made her kill her own family.

Villagers say they recall no tiff between Shabnam and her parents, who they say doted on her. “They fulfilled all her wishes. No one knows what entered her mind,” says a resident.

“Shaukat was so simple that even if Shabnam had eloped with Saleem, he would have accepted their relationship within a month. But she did not elope. It was all done for the property,” says a resident.

Umair says Shabnam had been giving her family small doses of drugs for some time. “Masterji would often complaint that he felt sleepy all the time and slept a bit too much in a day,” he says.

Villagers take me to the first floor to show the rooms where the bodies were found. The rooms are nearly empty, save for wooden cots with no bedding. In one of the rooms is a photograph of Shaukat Ali, Sattar Ali, Sattar’s daughter Imrana and wife Fatima.

Shabnam’s aunt Fatima, quiet all this time, says she wants to say something. “I request the government to not hang my Shabnam. Send her in jail for her entire life, but don’t hang her,” she says.

Villagers begin giggling; they say on her face that she has changed her stand on the issue. Several news reports in the past have quoted Fatima as welcoming the court’s decision to hang Shabnam.

Fatima says she has neither met Shabnam since the murder nor her son. The child was born in the jail premises, and spent the first seven years there itself. An old friend of Shabnam who lives in Bulandshahr then came forward and adopted him.

The child recently pleaded mercy for his mother with a placard.

As we move out of the house, villagers say Fatima has taken a “U-turn” as she knows that the rest of the village has seen through her greed.

Saleem’s house is inside the village. On my way, a group of elderly men are sitting in the sun.

Zahid Khan says I am the fourth or fifth reporter to be visiting the village this week.

The group says they still cannot believe that Saleem carried out the killings as he was among the most shy and polite young man around. They say that they don’t know Shabnam much as she lived a little distant from them.

“Her name is famous though,” says Shehzad, laughing. “Some years ago, a woman had a scuffle with her husband and his family. She brought a knife from the kitchen and declared – Shabnam is my name, don’t mess with me.” The crowd giggles.

Zafar Khan says Shabnam has brought notoriety to the village. “Our village is Bawan Khedi. It’s at the centre of 52 villages. This is why the name [Bawan is Hindi word for 52]. But now, it’s called Shabnam’s village,” he says.

One person from the crowd takes me to the house of Saleem. As I knock the door, a woman emerges. She shuts the door as soon as she sees me. “No one of us wants to say anything more,” she says from behind the door.