Instead Of Obeisance, Mamata Offers Politics At Puri Temple; Devotees Lash Out 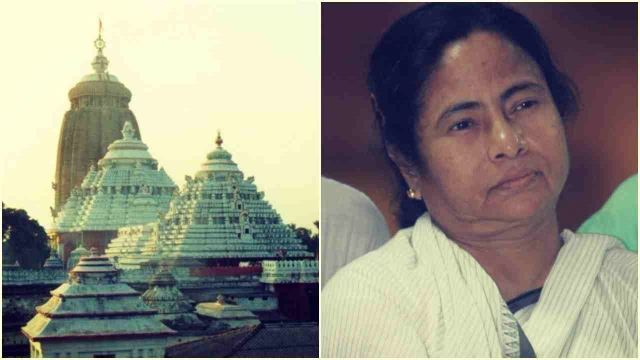 The Puri temple and Banerjee

Bengal Chief Minister Mamata Banerjee, who has a penchant for raking up controversies, created another one on Wednesday when she made political statements from the hallowed precincts of Shree Jagannath temple in Puri. Mamata, in the presence of some servitors of the temple which is highly revered by all Hindus as one of the Char Dhams, lashed out at the BJP and made many allegations against the party.

An unsavoury controversy has now broken out over Mamata making such angry political statements from the premises of the temple, as this newsreport clearly states. Many servitors and prominent people of Puri, the seaside temple town, have condemned Mamata for using the temple premises for her political purposes and criticised the temple authorities for allowing her to do so.

“A temple, or any place of worship, should never be used for political activities or for making political statements. Every Hindu knows that a temple is only for worshipping and praying. But this lady politician defiled our temple by making political statements from the temple. Her statements were broadcast by many news channels and she appears to be angry and abusive in them. A temple is no place to display such emotions,” said Purna Chandra Das Mohapatra, a prominent citizen of Puri.

Many servitors are blaming the temple administration for this. “Mamata Banerjee, despite her claims of being a Hindu, may not have known that a temple is not a place from which political statements can be issued. It is not a place from where political activities can be carried out. The temple authorities who planned her visit and accompanied her should have briefed her properly about the decorum to be maintained inside the temple,” said Premananda Mohapatra, a senior servitor of the temple.

A group of servitors are planning to write to the managing committee of Shree Jagannath Dham and the Gajapati Maharaj of Puri, Dibyasingha Deb IV, protesting the misuse of the temple premises by Mamata. The Maharaj heads the Shree Jagannath Dham managing committee and plays an important role in the temple’s affairs. “We will demand that the temple be purified and cleansed since it has been defiled by the Bengal chief minister,” said Premananda Mohapatra. Many other servitors have decided to sign the protest letter.

Many blame Ramkrishna Das Mahapatra (also known as Rajesh Daitapati), the chief servitor (or daitapati) of the temple, for allowing Mamata to misuse the temple premises for her political ends. He is close to Mamata and had visited the chief minister at her Kolkata residence a few times and blessed her. “Rajesh Daitapati has even been predicting her electoral success and holding special prayers for her on his own initiative. He is very close to the chief minister’s brother (Swapan Banerjee) who had made huge donations to the temple and sends handsome sums of money to him regularly,” revealed another servitor who did not want to be named.

Mahapatra gave interviews to newspapers welcoming Mamata to Puri. The chief badagrahi (protector) of Bhagwan Jagannath’s chariot, Jagannath Swain Mohapatra, is also being held responsible for Mamata’s grave indiscretion. “He (Swain Mohapatra) was accompanying Mamata throughout her visit to the dham and he should have interjected and stopped her from making political statements inside the temple complex. Instead, he just looked on and even nodded his head and smiled, as if in agreement with the Bengal chief minister, when she made those political statements,” said Arvind Das Padhi, a senior servitor. Swain Mohapatra found prominence in photographs published in newspapers on Mamata’s visit to the temple. Mamata also visited his house after the visit, thus revealing the close ties she has with Mohapatra.

Like with much of everything else she does, Mamata’s visit to Shree Jagannath Dham attracted controversy even before she set foot in Puri. A section of the servitors led by Shree Jagannath Sevayat Sammilani opposed her visit to the Dham on the grounds that she supported beef eating. The Sammilani secretary Somanath Khuntia had declared that the body would oppose the visit. An overzealous police force detained Khuntia ahead of Mamata’s visit, an action that has triggered a lot of anger among the servitors.

“This (the detention of a servitor by the police) has never happened in the past. The police acted on the behest of Rajesh Daitapati and Swain Mohapatra. We are sure the political rulers of Odisha also asked the police to detain Khuntia in order to please Mamata Banerjee. This is wrong and we shall protest,” said Ananda Khuntia, a senior servitor.

Mamata’s visit to Shree Jagannath Dham has, thus, triggered a raging controversy and left behind bitter memories for many.