Intellectualism And The Sangh 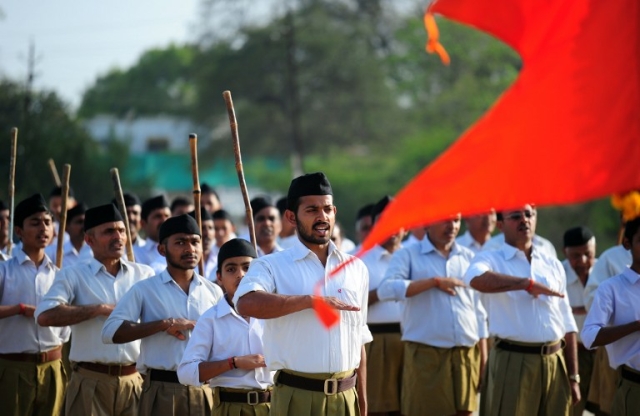 The Indian Left, who despise the RSS  for a so called ‘lack of intellectualism’, do not comprehend the fact that without intellectualism a mass based organisation cannot reach the levels that the Sangh has

For decades, articles belonging to the left spectrum of politics, have proclaimed that the Rashtriya Swayamsevak Sangh (RSS) has not produced any intellectual of note.

But who defines this so called ‘lack of intellectualism’ in RSS? Interestingly, it is the ones who were dominating the state-funded institutions appointed on the basis of conforming to an ideology and not because of scholarship.

So essentially, the leftists – who lament the supposed intellectual void in RSS – have produced their own intellectuals not by setting up their own institutes, but by capturing the state institutions.

To explain my point, I would refer the following articles by Ramchandra Guha:In Absentia,Some thoughts on the closing of the Indian mindandCaptive Ideologues – History beyond Marxism and Hindutva

Perhaps inadvertently, Guha lets out that ‘(a)t least since the time of Indira Gandhi, the Central government has sought to undermine the autonomy of institutions that promote culture and scholarship.’

However, he admits that the leftists were allowed to capture the state institutions where one would normally find intellectuals, and that this was done with a political objective in mind. And he also says that only fellow-travelers had any hope of being admitted in the supposedly hallowed portals.

Does this mean in these controlled institutes the prime qualifiers for an ‘intellectual’ were competence along with sycophancy?

If not then how is it possible that none of the positions on the history of post-independent India is critical about the Nehru-Gandhi family, even where there is a legitimate reason for speculations? Can that history be unbiased?

By definition an intellectual space need not necessarily be the one created by the state. But, state institutions – dominated by the leftist ideologue – came to be portrayed as the only legitimate space of intellectualism. And the consequent ideological inclinations became the state’s ideological position.

The Left have projected that within the Marxist school of thought solutions to the issues confronted by the socially underprivileged in our country can be found.

Yet, even today one frequently hears of atrocities against the Dalits primarily by those who are classified as Other Backward Castes. They have authenticated the political programme of the appeasement of the religious leaders of the minority communities, as a legitimate tool to win elections.

But the Sachar Committee has highlighted the failure of the political leadership to do anything for the economic and social progress of the poor in the Muslim community.

Their definition of secularism was exclusively in terms of opposition to the RSS ideology. When sociologists like T N Madan and Asish Nandy wrote articles questioning the practice, and inquiring whether there is true secularism, they were projected by their colleagues as having suddenly being supporters of the RSS.

The two, and many others, were intellectually terrorized in stopping their inquiry on the lines they had proposed. And so the project of a perverted secularism still prevails.

In the economic field, the Marxist ideology determined the policy directions that the state followed. By 1980 it was clear that these policies were a failure. However, instead of introspecting on the causes of the failure, the Hindus were blamed by the Marxists for being cussed at not using the supposedly wonderful opportunities that were provided to them.

Today the same Marxists proclaim that the growth, that has been achieved by the changes instituted since 1980, has done nothing for income equality between sections of the society. They do not even think of considering to examine whether there was income equality when their policies dominated the thinking at the time.

In case of history, the Marxist starting point is that there is nothing in the history of our nation that we need to be proud of. Hence, any inquiry in to our past will only lead to disappointment.

In fact, the history is presented in a form that does not conform to the national consciousness. During the 1940s, they said that India consists of many countries, following the line of the Soviets in USSR. They completely ignored the cultural unity that enabled Adi Shankaracharya to give discourse on Hindu philosophy all over the country. Or that of Swami Vivekanand speaking, again all over the country, on the same subject after he came back from the World Parliament of Religions, held in 1893.

Interestingly at one place, Guha himself says: “Marxist historiography is a legitimate model of intellectual enquiry, albeit one which — with its insistence on materialist explanations — is of limited use when examining the role of culture and ideas, the influence of nature and natural processes, and the exercise of power and authority.”

How is it possible that a legitimate model is of limited use when it comes to applying it to so many different strands of inquiry?

Further it is also pertinent to point out how the leftists used their positions in the various state organisations to enrich themselves. Guha accepts that the Marxists who were given positions of influence in the state run institutions went about their task in a partisan and nepotistic manner.

And, as Arun Shourie pointed out in his book “The Eminent Historians”, they also had funds coming their way without showing any results of their efforts. In fact, Shourie has clearly shown the blatant disregard that these eminent historians had to any normal rules of public funded institutions.

And an attitude that would seem to indicate that it is the duty of the society to ensure that they had a luxurious lifestyle, even though the people on whose behalf they claim to be speaking live lives of misery.

A defining feature of Marxism was that there was never a robust discussion, amongst those who continued to identify themselves as Marxists, about the premise on which it was based. Organisational rigidity and a top-down leadership ensured that free thinking was actively discouraged.

With changing social environment, the discussions would have fine-tuned the ideology to make it relevant and dynamic. Marxism, right from the time it captured state power at the political level, has had a deep disdain and suspicion of those occupying the intellectual space, particularly ones outside the state institutions.

Lenin said: “In general, as you probably know, I am not particularly fond of intelligentsia, and our new slogan ‘eliminate illiteracy’ should by no means be taken as expressing a wish to give birth to a new intelligentsia. ‘Eliminate illiteracy’ is necessary only so that every peasant, every worker can read our decrees, orders and appeals by himself without anyone’s help. The goal is purely practical. That’s all there is to it”. (Quoted in D N Ghosh, “A God that is failing”, The Times of India, December 6, 2007)

In effect, Lenin set about creating an army of useful idiots, who, being literate, could be given space in state institutions to take the Marxist propaganda forward.

But, merely occupying the intellectual space really does not necessarily make one an intellectual. There is an important characteristic that is required, the one where Ghosh, in the above referred article, quotes Albert Camus as saying, “…the intellectual’s role will be to say that the king is naked when he is, and not to go into raptures over his imaginary trappings”.

The writings of Guha would show that the Marxists who have commandeered the position of patronage in all the state funded institutions know that if they said that the king was naked, they would have to suffer the same fate as that of the intellectuals (in the true sense) who opposed Marxist leaders like Lenin and Stalin.

In every country with a Marxist government, even in West Bengal, the ones occupying the intellectual space were always under threat of the state funding drying up. The sad experience of dissidents like Maxim Gorky and Aleksandr Solzhenitsyn in the Soviet Union were examples of what would happen to them if they even thought of mustering courage to defy the party line.

Every Marxist government has shown the same disdain for genuine intellectuals as expressed by Lenin. They thought such people would be a threat to their position of power, and so had to be controlled, if possible, or neutralised (by exile or by death).

In China, during the time of Mao Tse Tung, anyone occupying the intellectual space showed even a hint of questioning the party line was sent to labour camps for supposed re-education. In Cambodia, thousands of intelligent people were killed merely for being intelligent.

He inspired other intelligent persons to join the RSS who built up the RSS to what it is today. The RSS would like the people to judge them by the work that is done, and not by flaunting the education qualifications, or the name of the state funded institute that they are employed at.

Even though the intellectual space was denied to them by the machinations of the Marxists, and their political masters, the Hindus worked in their own way to keep the memory of our civilization and spirituality alive.

India is unique in the sense that those who came here from outside to conquer the land and subjugate the civilization were not fully successful. Their control stopped at the level of the mundane issues relating to administration. The Hindus continued to control and nurture the civil institutions through which their history and culture was propagated through generations.

And this formed the base on which the Hindus could easily build upon when they had the political freedom to do so.

The Hindu samaj provided its ‘Intellectual Kshatriyas’ various platforms to convey their thoughts to the people at large. In the true Hindu tradition, these platforms were not a one-way flow of information. There would be debates and there would be discussions, so that the Intellectual Kshatriya could refine their thoughts, as well keep them relevant to the needs of the time. Through such debates, Adi Shankarachrya was as much a student as he was a teacher.

The Hindus who ventured into natural sciences always found the philosophy books as important to their work as the ones in sciences. Many of them wrote treatises on Hindu philosophy with as much fluency as on the sciences. And they had no hesitation in accepting that the understanding of Hindu philosophy made them better scientists.

Out of the tens of thousands of the Intellectual Kashatriyas, I would like to name two – Ram Swarup and Sita Ram Goel – to whom I am grateful for forming my own thought process and keep them rooted in the Hindu culture and history.

Apart from being a historian, Goel also set up a publication house, which gave so many others to see their work in print, and reach a larger number of people. Other Hindus have posted these works on the internet, and it has become available to tens of millions of people all over the world.

Due to their training in ‘pamphleteering’, and thinking that language can make a good substitute for logic, the Marxists are not able to comprehend that without intellectualism a mass based organisation cannot reach the levels that the Sangh has.