Is Assam The Next Target For Jihadi Terror? 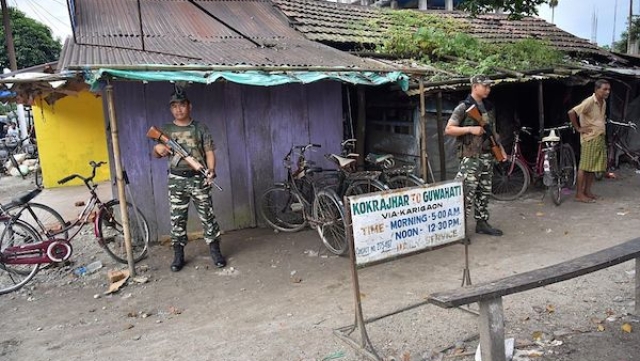 On 5 August, Assam witnessed a new kind of terrorism, seemingly inspired by Islamist terrorists. The armed militants, on that fateful day, opened fire and also lobbed a grenade over civilians in broad daylight in Kokrajhar. The post-incident confusions just mounted on the speculation about the external element’s involvement in the massacre.

The gory incident left 14 civilians dead and over 25 wounded while a gunman was also killed by the State Police and Central Armed forces at the Balajan Tiniali weekly market of Kokrajhar district. Among the victims, there were eight from the Bodo community and two from the Nath community whereas four were Muslims. The slain militant was identified as Manjay Islari alias Mwdan.

According to the additional Assam Police Chief L.R. Bishnoi, a group of three gunmen arrived at the location and started indiscriminately firing over the market crowd. The security personnel succeeded in neutralising Manjay on the spot, from whose possession one AK-56 rifle, a mobile phone and two SIM cards with a Chinese grenade were recovered.

Assam Police Chief Mukesh Sahay termed it as the handiwork of the banned National Democratic Front of Bodoland (NDFB)— the I.K. Songbijit faction— though the character of the terror attack was different from their earlier disruptive activities. His version was echoed by Assam Finance Minister Himanta Biswa Sarma and the Bodoland Territorial Council Chief, Hagrama Mohilary.

Assam Chief Minister Sarbananda Sonowal swiftly condemned the dastardly attack on Kokrajhar and also reiterated the government’s pledge to protect the life and properties of the people of the State. Sonowal, who was in New Delhi, spoke to Prime Minister Narendra Modi, Union Home Minister Rajnath Singh and National Security Adviser Ajit Doval to apprise them of the situation.

The first Bharatiya Janata Party Chief Minister in Assam, Sonowal directed responsible officers to rush to the location and took appropriate actions against the terrorists. He visited Kokrajhar on 8 August to take stock of the situation and also chaired a strategy meeting of the Unified Command at Kokrajhar Circuit House.

Maintaining that the Assam government’s zero tolerance approach towards terrorism would continue and that his government is “fully committed towards protecting life and property of the people”, Sonowal also hinted at the NDFB (S)’s involvement in the assault. He made an appeal to the people to remain cautious and to maintain peace and harmony.

The Chief Minister also decided to distribute an exgratia of five lakh rupees to the close relatives of the deceased, one lakh rupees for those who sustained significant wounds and Rs 20,000 to those who received minor injuries. At the same time, Sonowal assured free medical treatment to each and every injured individual in the incident.

Minister of State for Home Kiren Rijiju, while commenting on the Kokrajhar incident, said that the Balajan terror attack was very shocking and unfortunate. Rijiju, however, assured that the culprits behind the terror attack would be punished under the law. The State witnessed a massacre on the evening of 23 December 2014 when the armed militants, belonging to the NDFB (S), killed 76 Adivasi people in a series of attacks. Following the incident, the counter-insurgency operations were beefed up which resulted in neutralising many hardcore NDFB (S) militants and capturing dozens in the Bodoland Territorial Autonomous Districts (BTAD) area.

President Pranab Mukherjee, Prime Minister Narendra Modi and Congress President Sonia Gandhi strongly condemned the incident and extended condolences to the families of the victims. Describing the attack as “a mindless act”, they insisted on identifying the perpetrators at the earliest and punishing them subsequently. A team from the National Investigation Agency also visited the site of the massacre to collect valuable evidence.

The Assam Human Rights Commission (AHRC) recently issued a notice to the government at Dispur for conducting a high-level probe into the Kokrajhar massacre and submitting the report within four weeks. The AHRC directive asked the State Chief Secretary to carry out the enquiry by a committee comprising of three members, headed by a retired High Court judge, with two from the police and civil society groups.

“The committee should inquire into the circumstances leading to the killings to find out lapse and laxity, if any, by the district administration and/or the state and to fix responsibilities on the authority or person(s) found to be involved in alleged negligence in protecting human rights violation of people in general and the affected individuals in particular in BTAD areas,” said the AHRC’s order.

Contrary to government’s claims, the NDFB (S) not only denied its involvement in the Balajan incident but also condemned the open firing over civilians and demanded to track down the culprits. President of the NDFB (S) B. Saoraigwra, in a media statement, expressed his deep sorrow for the loss of lives and condolences for those who had lost relatives.

In two repeated statements, the militant outfit admitted that Manjay Islari was their area commander of the 16th battalion, but he retired around three months ago from the NDFB(S). Moreover, Manjay was reportedly arrested by the Security Forces before the attack and, hence, the NDFB (S) claimed that it was masterminded by the government agency only. Even Manjay’s parents did not recognise him as their son.

The banned outfit also criticised Himanta Biswa Sarma and Hagrama Mohilary, regarding the accusation that NDFB (S) cadres were involved in the incident. Instead, they argued that both Sarma and Mohilary were indirectly involved, as they “came to know about the massacre within a few minutes” after it took place.

Amazingly, the Union Home Minister Rajanth Singh, while giving his statement in the Parliament on 8 August, didn’t specify who killed the militant; rather, he commented, “We are trying to ascertain the identity of the slain militant and the outfit involved in the attack.”

For one, the armed groups have asserted that they cannot be ignored, no matter who is in power. Professor Hazarika also added that the incident demonstrated the extreme vulnerability of this beautiful yet politically broken region. As the condemnations poured over the incident, the United Liberation Front of Assam (ULFA) also came out with the statement that “killing of innocent people cannot be called a revolution.” A team of ULFA members, led by its Chairman Arabinda Rajkhowa, recently visited the location where the militants targeted the civilians.

Though admitting that the ULFA also adopted the path of armed revolution, he opined that civilians should be spared from any attacks. Rajkowa also urged the government to find out the culprits, at the earliest, as the situation slowly started becoming murkier after the NDFB (S) denied their involvement.

Speaking to the media, an insurgency expert based in Assam argued that the deadly attack was masterminded by the NDFB (S) with the support from Pakistan’s ISI. Ghanashyam Murari Srivastava, the former Police Chief of Assam and Tripura, pointed out that many armed militants from the region assembled recently in southern Bangladesh with the support from ISI officials and planned some major attacks in northeast India.

Earlier, the Hindu Yuva Chatra Parishad (HYCP) came out with a statement that the “involvement of jihadi elements in the Balajan attack cannot be ruled out” and, hence, the instant claim made by Assam police personnel regarding the participation of NDFB (S) cadres in the gruesome attack was not acceptable to them. The organisation pointed out that the modus-operandi and style of the attack were similar to those of jihadi terrorists and, hence, it could be the handiwork of Islamist militants.

The Sentinel, in an editorial, stated the following -

“Assam is not an easy State to govern, and the Sarbananda Sonowal government is now confronted with the first terror attack just two months after taking charge...Ultras are known to move openly with arms in the entire BTAD belt bordering Bhutan; they can melt quickly into the populace minutes after a killing, and no common civilian will dare raise an alarm.”

Chief Minister Sonowal will now be judged sternly on the law and order front in which his predecessor Tarun Gogoi of Congress was sadly deficient.