Is BJP Emerging As The Primary Opposition In West Bengal? 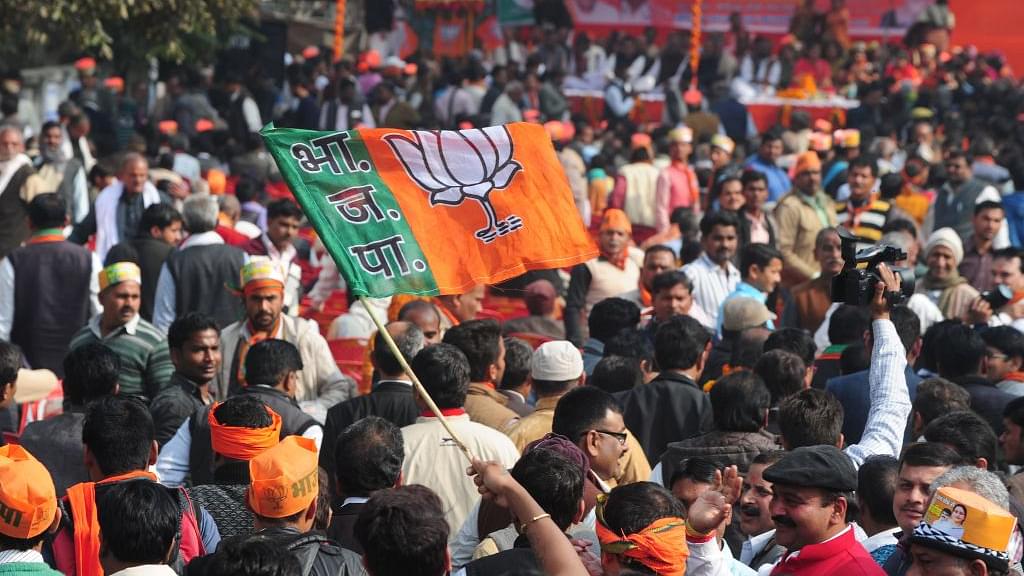 Supporters of the Bharatiya Janata Party at a rally. (SANJAY KANOJIA/AFP/GettyImages)

The Bharatiya Janata Party (BJP) saw a 13 percentage-point increase from its 2011 vote share in West Bengal during the 2014 Lok Sabha elections. It got the same number of Lok Sabha seats as the Communist Party of India-Marxist (CPI-M), and was only six percentage points behind the latter in terms of vote share. A look at the previous three Lok Sabha or assembly elections shows how big an achievement this was for the party. However, the 2016 assembly election results were slightly disappointing for the BJP. It could only win three assembly seats despite getting a 10 per cent vote share.

A post-poll survey by the Centre for the Study of Developing Societies (CSDS)-Lokiniti offers some explanation for the BJP’s poor performance in the 2016 assembly elections. There is no leader who comes even close to Mamata Banerjee in terms of popularity ratings in the state: 38 per cent of the respondents wanted her as the chief minister after the elections. CPI-M’s Surya Kanta Mishra was a distant number two, with 11.8 per cent. No BJP leader even scored 1 per cent.

Having said this, the 2016 results were an even bigger dampener for the left. The CPI-M, which ruled the state for 34 years till 2011, was reduced to the number-three party in the state. The waning of the left has helped the BJP strengthen its claim as the principal opposition party in the state. Civic polls were held in seven districts of the state in August. The Trinamool Congress swept the polls. However, the BJP finished as the biggest opposition party in all seven municipalities. A comparison of vote share in the 2017 and 2012 elections shows that both the Trinamool Congress and the BJP have gained at the cost of the left and the Congress.

West Bengal is due to hold panchayat polls next year. Rural body elections are seen as a bellwether political event in the state. Will the BJP be able to emerge as a strong opposition to the Trinamool Congress?

CSDS-Lokniti statistics from the 2016 post-poll survey offer some interesting insights into this question: 40 per cent of the respondents felt that the Trinamool Congress government unduly favours Muslims. This has been an important political plank for the BJP in the state. On issues such as corruption and nepotism, the popular perception of the ruling party was much more negative than of other political parties. None of these seem to have affected the Trinamool Congress’s electoral prospects, though.

This apparent mismatch can perhaps be explained by the fact that the Trinamool Congress’s organisational strength on the ground can overwhelm any political opposition.

In his recently released book, How the BJP Wins, Prashant Jha argues that the BJP’s expansion in states where the party is weak, rests on a mix of three strategies: co-option of the existing political elite, dilution of the ideological core and pragmatic adaptation to specific realities. Jha gives multiple examples to prove his point. The BJP allied with separatist leader Sajjad Lone before elections and formed a government with the “hardline” Peoples Democratic Party in Jammu and Kashmir. It poached popular Congress leader Himanta Biswa Sarma before the 2016 assembly elections in Assam. In Manipur, the party took up the issue of extrajudicial killings (contrary to its otherwise hardline posturing on security-related matters) and did not push its anti-beef agenda. Manipur’s current BJP chief minister N Biren Singh was a minister in the previous Congress government.

Something similar seems to be taking place in West Bengal. Former railway minister Mukul Roy, who was among the co-founders of the Trinamool Congress with Mamata Banerjee, has announced his decision to quit the Trinamool Congress this week. A few weeks ago, CPI-M expelled its Rajya Sabha member Ritabrata Banerjee from the party. To be sure, both these leaders have not made their future plans explicit. However, there is a lot of chatter that they might do business with the BJP. Roy was warned by his party for “cosying up” to the BJP leaders. In an interview to Republic TV, Ritabrata Banerjee left the question of joining the BJP open-ended. Lakshman Seth, a former CPI-M Lok Sabha member from Haldia in West Bengal, joined the BJP in October 2016.

These leaders have a patchy record. Roy is facing a CBI enquiry in the Sardha scam case. Banerjee has been accused of inconsistencies between income and expenditure and “moral degeneration in relation to women” by the CPI-M. Seth is widely seen as being responsible for the precipitation which led to the police firing on farmers in Nandigram in 2007.

Haldia, where CPI-M leader Seth defected to the BJP, was one of the seven municipalities which went to polls in August. The left suffered a decline of 42 percentage points in its vote share there. The BJP reached a figure of 10 per cent. Trinamool polled 85 per cent of the votes. The situation could be more favourable to the BJP in assembly or Lok Sabha elections.

Is the BJP’s strategy of co-opting the existing political elite paying off in West Bengal? Are Banerjee and Roy headed the BJP way? If yes, would they be able to add to the BJP’s support base, like Seth did, in the coming days? West Bengal politics is bound to get more interesting in the days to come.