Is Government Ready For Post-Mandir Info War? Here’s How It Should Prepare The Ammo To Counter It 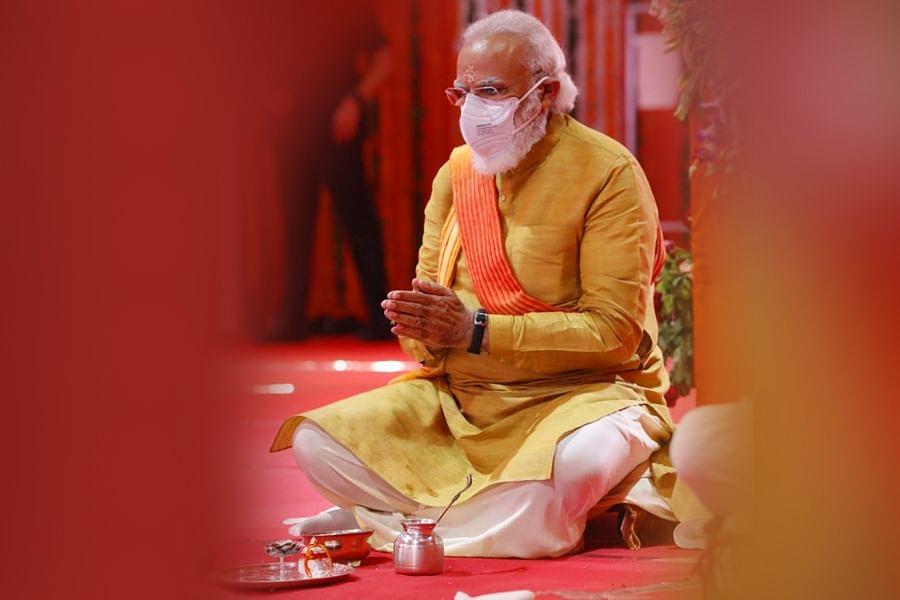 Prime Minister Narendra Modi during the Bhoomi Pujan of Ram Temple in Ayodhya.

The battle for Ram Janmabhoomi may have been won, with the Prime Minister himself attending the Bhoomi Puja on 5 August to make this point, but we have to brace for – and be ready to proactively counter – for the other war now underway. This is the information war that the Hinduphobic Left, the Islamist cabal in India and abroad, and a whole bunch of alleged “liberals” will now launch against us.

One should expect a fusillade of negativity that will make the anti-CAA protests look like a friendly high school debate. We must get the information ammo ready, and also identify the general who will use this ammo effectively.

It is a pity that the war against radical Islamism, including terrorism, is being effectively fought only by totalitarian states like Russia and China, and semi-autocratic governments like Singapore.

Democracies have chosen the safer “liberal” alternative of mildly aligning with Islamism and even taking up cudgels against alleged Islamophobia in countries like India, which have borne the brunt of Islamic iconoclasm and depredations – and continue to remain targets of Islamic terrorism.

There are three broad constituencies that need to be reached out to immediately, and a fourth imperative is to address the growing Islamic fundamentalism that is being fanned inside India. The three constituencies to address first are the general mass of Muslims in India, academic institutions in India and abroad, and foreign governments and their missions here.

With possibly close to 200 million Indian Muslims, it is important to reach out to them without apology and appeasement. If we do either, we have lost the game. It is important to ensure that we do not send the token Muslims in the NDA (National Democratic Alliance) government as representatives of the government’s outreach. Ordinary Muslims think of them as Quislings.

This means a credible Hindu minister or intellectual must be made the key pointsperson(s) in this outreach, which should include Muslim intellectuals and academics, sensible clerics, and political leaders. A messaging programme addressed to Muslims of India must also be prepared for wide dissemination through mass media and personal contact programmes.

The crux of the message must be that while today’s Muslims need not feel apologetic about what Babur’s general or Aurangzeb or Tipu Sultan did centuries ago, they cannot be allowed to deny that temple destruction did take place. A key piece of evidence would be the late Sita Ram Goel’s second volume on what happened to Hindu temples, drawing evidence purely from Muslim sources.

The message must assure Indian Muslims of fair treatment, but not special treatment, without compromising the Hindu civilisational goals of building a Dharmic and plural society that is not theocratic in nature.

Muslims may or may not buy this straightforward message, but it is worth attempting if only to prove a point that the idea is not to sideline them from mainstream society. One has to bet that straight talk will at least convince some modern Muslims that no one is trying to pull a fast one on them by offering them placebos like Haj subsidies and salaries to imams, while letting them slide on the economic scale.

The second constituency that needs addressing is academics, both in India and abroad. The government must put together a team of genuine history and sociology experts that will address academics in all institutions, including the Left bastion of Jawaharlal Nehru University, explaining the legitimacy of Hindu aspirations and India’s civilisational ethos, and showing up the poor scholarship of Leftist pamphleteers and propagandists. It does not matter if this takes a few months to cobble up with credible scholarship that contradicts Leftist history-writing, but it must be done.

The third constituency is abroad. We need to put together a simple message along with historical backgrounders that tell the democratic world that neither CAA nor the movement to reclaim temples destroyed by Islamic rulers is unreasonable, given India’s history of Islamist rule followed by colonial mischief. If pulling down statues of Columbus or slave-owners in today’s America is kosher, surely reclaiming destroyed temples in Kashi and Mathura cannot be considered unreasonable.

The whole thing should be seen as an effort to decolonise mindsets in India and reclaim lost heritage. In this effort, true scholarship on Islamic iconoclasm, critiques of post-colonial American attempts to control the content of Indology, historical documents on the Nehru-Liaquat pact to protect minorities in both countries post-Partition (the failure of which forced us to adopt the CAA), and the demographic changes happening in India due to aggressive conversion activities need to be presented as verifiable facts that the Hindu civilisational-state cannot afford to ignore.

Special attention must be paid to Muslim countries that are trying to liberalise, including the rulers of the UAE, Dubai, Oman and Saudi Arabia. In the last-named country, Prince Mohammed bin Salman is trying to modernise his society by empowering women and bringing them into public spaces in a hitherto hidebound society.

It would help if Hindu-friendly “foreigners” like Koenraad Elst, Michel Danino, David Frawley and Francois Gautier, who know their own home cultures and specific vulnerabilities, are roped in to help in these efforts to address the constituency outside. Of course, Indian missions and intellectuals should lead the effort, but these voices – who understand both Indic and Western sensibilities – will enable a fusion of ideas to convey the same messages better.

Last, we have the larger and longer-term challenge of addressing Islamic radicalisation not only in Kashmir, but also Kerala, parts of West Bengal, Bihar, Uttar Pradesh, and some other pockets of Muslim concentration. The aim must be to re-examine traditional madrassa education and ensure that controversial and bigoted segments of the holy book are not given importance while teaching impressionable young minds.

Lessons should emphasise Indian pluralism and impart basic knowledge of Hindu religious and secular literature so that when these students go out into the world, they don’t live in an Islamist bubble. If madrassas can’t or won’t do this, they should be forcibly shut down.

We have to examine what is taught about kafirs, non-believers, and women’s place in society, and excise those bits from the curriculum that do not fit a plural, democratic culture. Holy books cannot be rewritten, but at least the teachers can be taught what not to teach.

If we do this successfully, jihadi Islam will find defeat in Hindu India, giving out a message of positivity to the whole world that Islam can be reformed. The pity is that Islam closed the doors to reason (aka ijtihad) nearly a thousand years ago, and remains stuck in an unquestioning belief that Islam can, and should, rule the world. In a post-imperialist world, this is simply unacceptable.