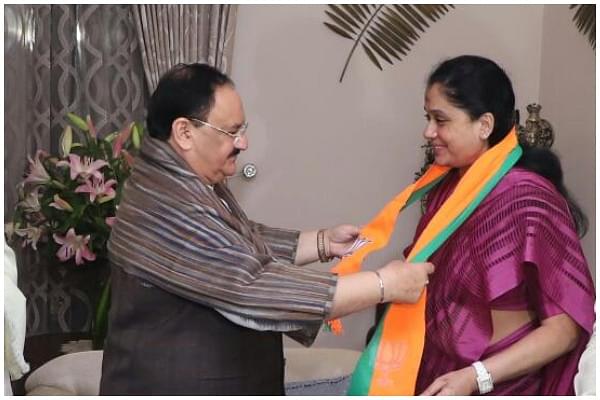 It is a sort of homecoming for popular Telugu and Tamil actor Satti VIjayashanthi, better known as Vijayashanthi when she re-joined the Bharatiya Janata Party (BJP) in New Delhi yesterday (7 December) in the presence of Union Home Minister Amit Shah.

Also known as “Lady Amitabh” and “Lady Superstar” for donning the role of a supercop in Telugu movies, Vijayashanthi returns to the BJP after 15 years.

She returns to the party at a time when it has begun to make its mark, particularly in Telangana with a victory in the Dubakka Assembly byelection and an impressive performance in the Greater Hyderabad Municipal Corporation elections.

The actor had begun her political journey with the BJP in 1998 and was made the party’s Mahila Morcha (women’s wing) chief. But she quit to float her own party and then join the Telangana Rashtra Samithi (TRS), when it headed the agitation for a separate Telangana.

Before this, Vijayashanthi, who made her debut in the Tamil movie “Kallukul Eeram” (Moisture inside a rock), had supported and campaigned for the All India Anna Dravida Munnetra Kazhagam (AIADMK) in the 1996 State Assembly elections.

In 1999, the BJP nominated her to take on then Congress President Sonia Gandhi from the Cuddapah Lok Sabha constituency, but the latter chose to contest from Bellary (now Ballari).

In January 2009, Vijayashanthi, who was born, brought up and educated in Chennai, chose to float her own party Talli Telangana (Mother Telangana) before merging it with the TRS as she couldn’t get going with her own party.

The actor, who was the first female star to command Rs 1 crore payment for starring in the Telugu movie “Karthavyam” which got her the national award for best actress, reaped immediate dividends for joining TRS.

She won from the Medak Lok Sabha constituency in 2009 on a TRS ticket, only to hand over her resignation in 2011 along with K Chandrasekhara Rao (KCR) espousing the cause of Telangana. It was, however, rejected for not being in a proper format.

Somehow, she picked up a dispute with KCR and quit TRS. In February 2014, she joined Congress just before the bifurcation of Andhra Pradesh and contested the Assembly elections from Medak, where she lost.

In 2018, Congress President Rahul Gandhi appointed her as a star campaigner for the Assembly polls and an adviser to the poll campaign committee.

Probably, finding the Congress making no headway in national and State politics, she has chosen her homecoming to BJP.

Vijayashanthi, who made her debut in Hindi movies in the Anil Kapoor-starrer Eashwar, has even paired opposite to Amitabh Bachchan in the Hindi movie Zamanaat.

The actor is the second from the tinsel town to join BJP since October after Kushbu Sundar, who also quit the Congress, became a party member.

Like Kushbu, Vijayashanthi’s entry is not without controversy. In particular, her remarks against Prime Minister Narendra Modi began to haunt her on social media ahead of her announcement to join the party.

In the 2019 Lok Sabha elections, the actor had called Modi as “dictator”, “terrorist” and “murderer” while campaigning for the Congress.

But like Kushbu, she felt “disillusioned” and “sidelined” in the Congress and chose to return to the BJP despite the unsavoury remarks she made against the Prime Minister.

For the BJP, it is another proof to show the people how Congress is in shambles. Vijayashanthi can be handy not only for the resurgent BJP in Telangana but also in Tamil Nadu, where she enjoys some popularity.