It’s Jihad In Kashmir; Deal With It As Such 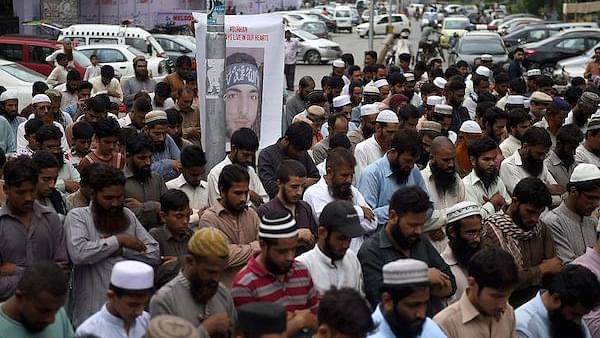 Hizbul Commander Burhani Wani’s encounter with security forces and the deaths in the subsequent violence have put Kashmir on centre stage once again. The ferocity of the attacks on the security forces and the unfortunate loss of young lives was accompanied by an outpour of unprecedented media support for terrorist Burhan Wani, and sympathy for Kashmiri separatism. It is difficult to ascertain how much of this support fuelled further violence, but if the “secular” and “liberal” support for Kashmiri ‘right to self-determination’ was out of conviction, there were a few visible signs of it before May 2014.

One anchor compared Burhan Wani to Bhagat Singh— a clear insult to the legendary Indian freedom fighter. One wonders what Bhagat Singh or his friend Ashfaqullah Khan would have thought of being associated with sectarian and secessionist forces, out to wreck the nation in their own life time. Another journalist sighed as to whether India, as a nation, had a soul at all? One other tried to paint Burhan Wani as a poor headmaster’s son, employing social media as his medium of protest. Banner headlines are spread across photos on social media pages, and reports in a section of the media barely conceal their support for Kashmiri secessionism.

This support has been a gradual build up. At the core of the JNU controversy, which was largely construed as a ‘Freedom of Expression’ issue, also lies Kashmiri secessionism and its open advocacy. Leftist professors spoke of Kashmir being a military occupation, and anchors opined that sanctity of flags or national boundaries were nothing but retrograde ideas.

If at all, this support—due to personal prejudices and having overcome its initial hesitation—is only going to be louder in the future. This section of the media and intellectuals broadly agree that Kashmir is an ethnic struggle, and that the roots of the problem lie in an unfair deal meted out to the region at the time of Partition. In a way, both Kashmiri insurgents and their cheerleaders in Lutyen’s Delhi present the problem as an unfinished agenda of the Partition.

But, irrespective of the motivations, political leanings and prejudices of “secular and liberals”, and despite the impossibility of redrawing of national boundaries—because of the inordinate influence that “liberals” wield in our discourse—it is important to see what the Kashmir conflict is really about. Is there a historical justification to Kashmiri insurgency, any more than it should have been for Hindu-majority districts of Sindh or Khulna? Is there a moral case for the separatist demand?

Other than the 13 Provinces administered directly by the British in pre-Independence India, whose fate was decided by a controlled election to Provincial assemblies in 1946, 565 princely states were given the choice to remain independent or merge with either India or Pakistan. Among the 552 princely states which joined the Indian Union, there had to be a first as also a last. Jammu and Kashmir happened to be one of the late signatories to the Instrument of Accession, though not the last.

However unlike Kalat (present day Balochistan) for whose advocacy as an independent state, Jinnah charged the Baloch king gold equal to his weight before sending Pakistani troops to annex the kingdom, India, despite the looming threat from advancing Pashtun tribesmen refused to engage unless Jammu and Kashmir had signed the Instrument of Accession. There is a huge difference in legal and moral terms when we compare the Jammu and Kashmir accession to Baloch occupation by Pakistan.

Another important thing to remember is that the Partition did not give regions an option to make choices for themselves. Kashmir, as one of the six geographic regions of former Jammu and Kashmir, had as little choice to make for itself as Brijbhoomi—my native place—in disjunction to its provincial domain of the United Provinces of Agra and Awadh. As for the Muslim-majority Kashmir falling in India, at least four districts in south-eastern Sindh were Hindu majority—Thar, Mirpur Khas, Amarkot and Badi with contiguity to the Indian border, Khulna and the Chittagong Hills in East Pakistan. After one of the biggest bloodbaths in human history, claiming more than a million lives and the largest ever migration on earth—not to forget that the Hindus were the major sufferers—people settled down to move ahead with their lives, putting the gory past behind them.

What kept the pot simmering in Kashmir was the same poisonous ideology which bred the ‘two-nation theory’ and Jinnah’s ‘Direct Action’. Any attempts to frame Kashmir as an ethnic strife with a historic basis are belied by the fact that Hindu majority Jammu and Buddhist Ladakh have remained totally immune to the separatist cause. Whatever pretence of “Kashmiriyat” that was left in the insurgency, evaporated after the ethnic cleansing of four lakh Kashmiri Pandits from the Valley. The jihadi character of Kashmiri insurgency bared itself in slogans like “Kashmir with Pandit women but without Pandit men”. It still reveals its character in the creed of Nizam-e-Mustafa, it professes for itself. It betrays its nature when plans to bring back Pandits are repeatedly and shamelessly opposed, and their pilgrimages to native holy places thwarted.

For the “phoney seculars and fake liberals” desperately wishing to see Kashmiri insurgents in the image of Bhagat Singh, the brutality of the Kashmiri Pandit genocide—should they care to look it up close—will point out to the same characteristic features found in theatres of Islamist aggression elsewhere: challenging the limits of depravity, with manifestations of disgusting patterns of oppression associated uniquely with ‘Global Jihad.’

Sarla Bhatt was a staff nurse at the Sher-e-Kashmir Medical Institue in Soura, Srinagar. She had probably heard a conversation between a doctor and a wounded terrorist. Dr A.A. Guru, who feared that his links with terrorists might get exposed, got her abducted from the hospital. She was gang-raped and tortured for five days after which her dead body was found in downtown Habba Kadal. Her eyes were gouged out, and her chest was burnt with cigarette butts, to mark an insignia—JKLF. Mrs Prana Ganjoo and her husband Prof KL Ganjoo, unlike most of the Kashmiri Pandits, did not leave the Valley in the bloody January of 1990. They trusted the assurances of Muslim friends, who formed a large group of their social circle. But they were done in by the Professor’s own colleagues who turned them over to terrorists, while on their way back to Sopore one day. Prof Ganjoo was killed and his six-year-old nephew thrown off a bridge into the Jhelum. Poor Mrs Ganjoo suffered days of torture, which would have seemed more like an eternity. She was gang-raped for days, had her breasts chopped off, and bullets pumped into her body.

Mrs Girija Tikoo, aged 24 and a mother of two children—four and two-years old—was a lab assistant in a school at Trehgam. She had left the Valley and had been living in Jammu for some time. After a few months, she went back to her school to collect her pending salary, not knowing she would never see her two children again. She was abducted, gang- raped for several days and then split into two by a carpenter’s saw. The stories of jihadi brutality can go and on, and they include Muslim victims also. Again, just as with any other Islamist terror outfit, Kashmiri jihadis did not spare Muslim women. Zarifa Sultan, Dolly Mohi-ud-Din, Halima and Marooqa Guddi were all abducted, gang raped and brutally murdered. If all of it sounds familiar to the recent tales of ISIS atrocities, it is because Kashmiri terror is a leaf out of the same book.

And if these stories or faces of victims did not reach us, it wasn’t for the lack of private television channels. Print journalists, who later joined television, blacked it out in their old medium too. For them, Yasin Malik—one of the rapists and murderer of Sarla Bhatt, killer of Lassa Kaul (Director, Doordarshan Srinagar) and four IAF personnel—was their Bhagat Singh of the 90s. He was invited to seminars and TV studios and lionised as a freedom fighter, by the likes of Arundhati Roy.

I don’t know if it occurs to the “liberal” crowd, but in their brazen support for jihad in Kashmir, a value they unwittingly undermine is also the one they crow about the most—secularism. Any support for Kashmiri secessionism, so soon after the bloody Partition, sends a message that secularism in India is a fluid concept, applicable only to times and regions in which Hindus are a majority. If secularism is indeed our core national value, Kashmir is its litmus test. Not only should this jihad be quelled with a heavy hand, but the insurgency should also be called out as such. Hurriyat and its “intellectual” supporters dreaming of Nizam-e-Mustafa should be reminded, as many times as they complain, that a country has already been carved out on those lines—the journey to which, for them, is just a few hours. And that for the curse of a two-nation theory, there will never be a second Partition.