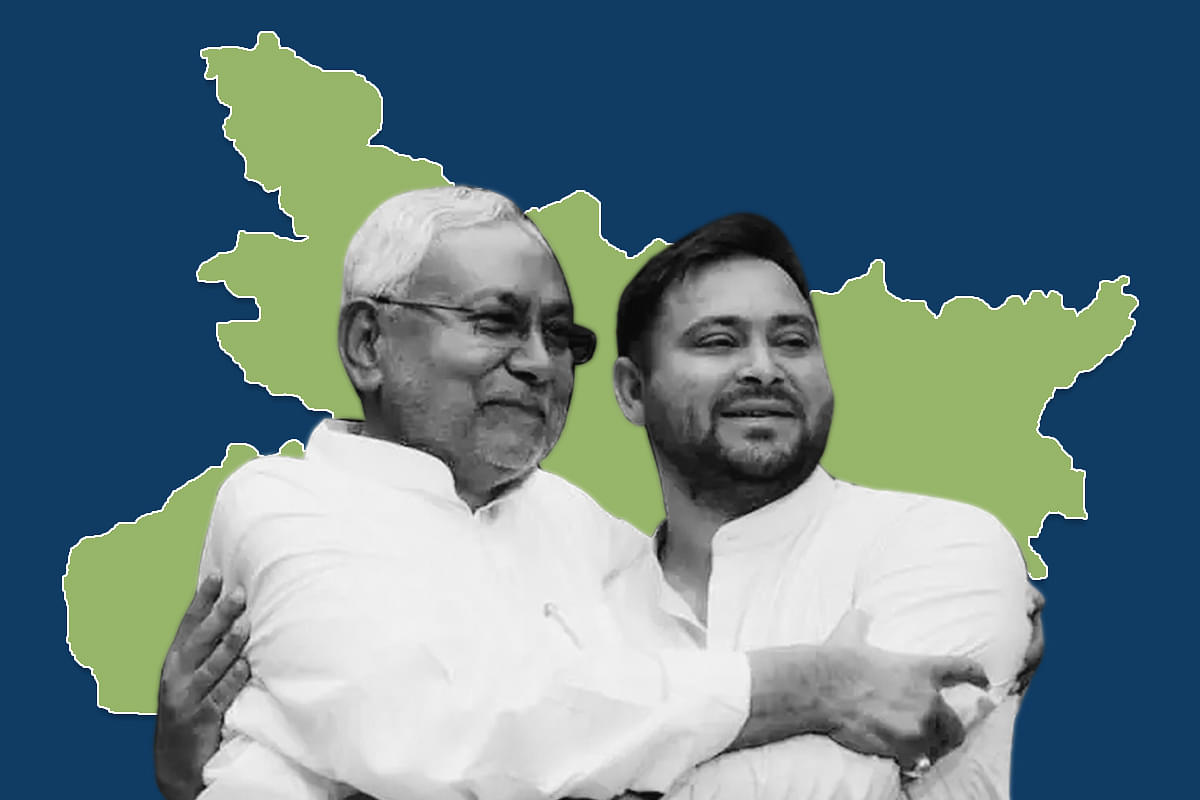 The Rashtriya Janata Dal (RJD) has finally disclosed what was till now a closely-guarded secret: that it wants Bihar Chief Minister Nitish Kumar to make way for his Deputy, Tejashwi Yadav, before the 2025 Assembly polls in the state.

Nitish Kumar had snapped his alliance with the BJP and teamed up with the RJD two months ago. The RJD is the senior partner in the ruling mahagathbandhan alliance.

Since then, speculation has been rife about the details of the deal struck between Kumar’s Janata Dal (United) and the RJD.

This Swarajya report had exposed the deal: that the RJD agreed to re-establish ties with the JD(U) on condition that Kumar vacates the CM’s chair for RJD patriarch Lalu Yadav’s son Tejashwi, who is the Deputy CM.

Confirmation of this ‘deal’ came Wednesday (21 September) evening when senior RJD leader Shivanand Tiwari told party workers that Nitish Kumar should stick to his promise of taking political sanyas and hand over the reins of the state to Tejashwi Yadav.

Tiwari, who was addressing party workers in Patna, reminded Kumar of his promise to retire from active politics and open an ashram to provide training in politics and governance to aspiring and junior politicians.

“Long ago, Nitish Kumar had said that he will open the ashram and provide political training. I will remind him to open that ashram after making Tejashwi the chief minister before 2025. After that, I will also join you in the ashram and train the political workers there,” said Tiwari, a former Rajya Sabha member.

What is significant is that Tiwari said this in the presence of Lalu Yadav and Tejashwi, as well other top leaders of the RJD.

Sources in the RJD told Swarajya that while Lalu Yadav and his son smiled broadly and nodded their heads in open acknowledgement of Tiwari’s statement, many among the senior leaders and workers of the party applauded Tiwari.

“This only shows that Tiwari was not issuing a statement in his personal capacity and his exhortation to Nitish Kumar has the sanction of the RJD patriarch and the party leadership. Without Lalu Yadav’s prior consent, Tiwari would not have made such a statement,” said political analyst Ram Swarup Mishra.

Mishra, who used to teach political science at Patna University and is close to the RJD leadership, also confirmed that top RJD leaders are aware of the ‘condition’ that Lalu Yadav laid down for JD(U)’s re-entry into the mahagathbandhan.

The JD(U) had abruptly left the mahagathbandhan in 2017 and teamed up with the BJP to form the government in the state. Nitish Kumar had, at that time, cited corruption in the RJD to walk out of the alliance with Lalu Yadav’s party.

Kumar had then accused Tejashwi, who was his deputy, of corruption and insisted that he (Tejaswi) step down till he gets absolved of all charges against him. When Tejaswi refused, he broke the alliance.

So when Kumar expressed his desire to team up with the RJD once again, Lalu laid down the condition that Kumar could continue as chief minister for now, but Bihar will go to the next Assembly elections under the stewardship of Tejashwi Yadav as chief minister,” said Mishra.

Nitish Kumar agreed to the condition. But, said a senior RJD leader and minister who did not want to be named, Kumar is a wily politician and will try his best to remain chief minister without violating the condition.

“That is why it was felt by the RJD leadership that Nitish Kumar should be given periodic reminders that he cannot retain his post till 2025. Though Lalu Yadav will not say this in as many words directly, the reminders and suggestions to Kumar to make way for Tejashwi will come from senior RJD leaders,” the RJD minister told Swarajya.

He added that as 2025 approaches, the demand for making Tejaswi the chief minister will gain momentum and the party rank and file will start voicing this. All that is meant to build pressure on Kumar to step down.

A key component of the RJD’s strategy to make Tejashwi the chief minister a few months before the 2025 Assembly elections is encouraging Kumar to play a larger role at the national level.

That is why, encouraged by the RJD leadership, Nitish Kumar is trying to forge an alliance of non-BJP parties. The JD(U) has started positioning Kumar as the leader of such an alliance.

At Wednesday’s meeting with party workers, Lalu Yadav said he would take Nitish Kumar along to meet Sonia Gandhi.

“The purpose is to seal a sort of pre-electoral deal with Sonia Gandhi that would ensure Congress support for Kumar as Prime Minister in case the BJP-led NDA fails to secure a majority and the non-Congress opposition parties win more seats than the Congress,” said the RJD minister.

"Such a scenario will trigger an intense jockeying among leaders of regional parties like Mamata Banerjee, Arvind Kejriwal, K Chandrasekhar Rao and Nitish Kumar to become the Prime Minister. And the support of the Congress will then be crucial.

Lalu Yadav is very close to Sonia Gandhi and if he can swing the deal, his case for Nitish Kumar stepping aside for his son to become the chief minister becomes very strong,” added the minister.

Another senior RJD leader who spoke to Swarajya said that Lalu Yadav does not want his son to become the CM long before the 2025 Assembly polls. “Making him (Tejashwi) the CM just a few months before the polls will allow the RJD to beat anti-incumbency,” he disclosed.

The RJD leadership’s assessment is that anti-incumbency will peak a couple of years from now. And it wants Nitish Kumar to be the fall guy and shoulder the entire burden of anti-incumbency.

The JD(U) is, however, unhappy with the first public hint of the deal involving Kumar stepping down as chief minister before the 2025 Assembly polls.

Senior JD(U) leader Upendra Kushwaha, who is close to Nitish Kumar, said in response to Shivanand Tiwari’s statement that Kumar has no plans of retiring and opening an ashram.

“The prayers of crores of countrymen are with him (Nitish Kumar). Indians want Nitish ji to continue to serve the people of India while staying at the highest peak of power,” said Kushwaha.

But such protestations by the JD(U), said RJD leaders, are only natural. They pointed out that even while issuing a denial (about Kumar’s plans to retire), Kushwaha unwittingly confirmed that Kumar may not remain the Bihar CM till 2025.

“He (Kushwaha) dropped a very broad hint, through his reference to ‘the highest peak of power’, that Kumar aspires to be the Prime Minister. That is an indirect confirmation of the condition that Laluji had laid down before allowing the JD(U) to return to the mahagathbandhan,” said the RJD minister.

But what if, as is widely expected, the BJP wins a majority in 2024 and Nitish Kumar’s ambition of becoming the PM is permanently buried?

The RJD minister’s tongue-in-cheek retort: “Then he (Kumar) should fulfil his true desire of opening an ashram for political aspirants. But one lesson the inmates of the proposed ashram should learn from Nitish Kumar is how not to change colours frequently to stay on in power”.

- People of Bihar, and Nitish Kumar himself, are the losers in state’s latest political drama

- Nitish Kumar has been wrongly associated with ‘good governance’, Sushasan Babu tag sits badly on him