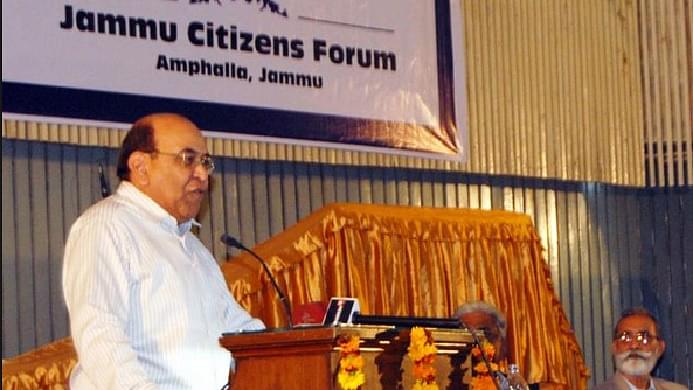 Lt Gen (Retd) Syed Ata Hasnain, who has been writing extensively on Jammu & Kashmir and security-related issues for almost two years now, was in Jammu on 27 October to participate in a seminar on the political significance of 27 October. It was on this day, 70 years ago, that the Indian Army landed in the under-attack Jammu & Kashmir to expel the Pakistani invaders, both regular and irregular, and retrieve the territories Pakistan illegally occupied between 20 and 26 October 1947 . People of Jammu observe this day as “Golden Day”.

The seminar was organised by the recently-launched Jammu Citizen’s Forum (JCF). A number of speakers expressed their opinion. But it was Lt Gen Hasnain, who won the hearts and minds of the people. His unambiguous assertion that solution to Kashmir problem will emerge from Jammu, and not from Kashmir, inspired and thrilled the audience. It was the first statement of its kind, and that was the reason it struck a chord with the people, who were fed up with the political establishments in New Delhi and Jammu & Kashmir.

To me nothing is more powerful than the people of the region (read Jammu). I will continue to emphasise, on this issue, that it is every citizen of Jammu who has to be made to realise that he is the most important citizen in this country today, because he understands this Kashmir problem. He is the key stakeholder in this entire issue. Peace in the whole of Jammu & Kashmir means a tremendous boost to the people of Jammu itself. I always talk about the business community of Jammu. How much they can contribute. How much infrastructure they can build and support the people of the state.

Not just this, he further said that the solution to Kashmir will emerge from Jammu. He said:

It is the people of Jammu who understand the psychology of the people. If you understand human mind on the other side of Pir Panjal, it is only you (people of Jammu), who can experiment on how to bring people together. Otherwise, Pakistan will keep disturbing the region and all this will continue and go on like this. Kashmir has been a problem for us and, therefore, I sincerely feel with all my boots on ground experience and different spheres in the state that the solution to the problem of Kashmir will emerge from here.

Earlier, on 8 October, Lt Gen Hasnain had talked about Jammu and said it deserved due attention. He had also warned that ignoring Jammu would be disastrous. He had said:

The darbar will move in another three weeks, hopefully bringing a tumultuous period in Kashmir’s history to a close. The six-month hiatus when the seat of government will be at Jammu must be spent doing some important things. First, ensuring that Jammu receives its due attention. The Jammu populace and the BJP’s street have been remarkably quiet; that should never be taken for granted, and it must be compensated by paying due attention to the needs of the region.

None in Jammu had ever imagined that there would be a person from outside Jammu who would say what the General said, in unequivocal terms. And his statements came at a time when the agitated civil society in Jammu had taken upon itself the task of defending and further promoting the Jammu cause, by mobilising public opinion across the length and breadth of the Jammu province.

A brief description of what the civil society in Jammu has been doing for sometime now would be in order. Such an exercise would help us diagnose what ails Jammu and what its aspiration is.

Civil society in Jammu has finally recognised the gravity of the situation as it exists in Jammu & Kashmir, and the dangers facing the neglected and marginalised Jammu province. They have realised that the people of Jammu province have already wasted their precious time and that they would lose everything in case they do not assert and create a “Kashmir-like situation” that forces New Delhi to look towards the Kashmiri people, barring internally-displaced Kashmiri Hindus, and address all of their concerns, reasonable and unjustifiable, at the cost of the people of Jammu and Ladakh. Their conclusion is that New Delhi and the Kashmiri leadership work in tandem and evolve and implement policies, which not only exclude Jammu and Ladakh from their scheme of things, but also holds Jammu and Kashmir aloof from the national mainstream.

Many active civil society members in Jammu have come to the conclusion, and very rightly, that it is the Indian political class that is responsible for all of Jammu’s woes. If the people of the region are to get their due share in the governance of the state as part and parcel of the Indian society, they have to fight those who control levers of power in New Delhi.

“Kashmiri leadership has been doing what it is expected to do. It was, is and shall always remain Valley-centric. We are not surprised over the anti-Jammu stance of the Kashmiri leadership. Our real problem is New Delhi, which in its desperate attempt to appease Kashmir and its population, has consistently sacrificed our genuine interests,” they have been saying in meetings they have been holding to discuss their plight and find ways to defeat the anti-Jammu forces, wherever they are and whosoever they are.

For decades, the people of Jammu have been fooled in the name of national interest, denied their due share in services, infrastructure development, due representation in legislatures through series of conspiracies. The list can be stretched ad-nausim. “It is time to say enough is enough, call a spade a spade and stand up so that they are counted by the powers-that-be in New Delhi,” the civil society members say.

They also said that "the people of Jammu province must launch a full-scale campaign for restoring the self respect of the people of the province and securing their legitimate rights from here and now. Speak out loud and clear for the entire world to hear and take notice. Jammu has awoken," they said, and added that Jammu is not a doormat.

“Stop using Jammu as a doormat to clean your shoes to enter the drawing room of Kashmir. We shall not tolerate this. The people of Jammu will, henceforth, determine what is in their and act accordingly. Delhi has no power of attorney from us to speak on our behalf. We are capable of speaking for ourselves,” they, in fact, have been saying.

That the Jammu civil society has of late become somewhat active augurs well for the region. Indeed, there is no political party in the Jammu region in the real sense of the term which has the audacity to take up Jammu people’s cause. All the political players in Jammu are, in one way or the other, affiliated with Kashmiri parties for personal reasons. Even the BJP, which got mandate from Jammu, has ironically joined the anti-Jammu struggle in Kashmir. They have let down their own constituency. The situation has reached a point that certain former ministers from Jammu go to Srinagar to participate in the anti-national and anti-Jammu rallies. Take, for example, the participation of at least two Jammu-based Congress ministers in the rally organised recently in Srinagar by the Jammu and Kashmir Pradesh Congress Committee chief Ghulam Ahmad Mir against the demand of ex-soldiers from Jammu & Kashmir seeking establishment of Sainik Colonies in Srinagar and Budgam in Kashmir.

The charge of the civil society in Jammu that their political class has utterly failed to discharge its obligations towards the people of the province just cannot be dismissed as silly and preposterous. Their charge is valid. Except for the Panthers Party, which invariably takes up the Jammu-specific issues and hold dharnas to draw the attention of the authorities to the burning issues in Jammu. All other parties, including the BJP, which got a massive mandate in 2014 from Jammu, behave in a similar fashion. However, the problem with the Panthers Party is that it is not consistent in its approach.

One can catalogue here innumerable instances to prove that the PDP, the BJP, the NC, the Congress and the CPI-M are almost on the same page as far as their attitude towards Kashmir and Jammu is concerned. However, it is neither possible nor desirable to refer to all of them in this small piece. Suffice it to say that their attitude is almost the same to the state’s special status, cow-killing and beef eating laws, 12.5 per cent service tax on chopper service to Mata Vaishno Devi and other Hindu religious places, National Institute of Technology Srinagar issue, National Eligibility Entrance Test for under graduate MBBS and dental courses, National Food Security Act, new industrial policy, the proposal of Sainik Colonies and even composite colonies in Kashmir for the internally-displaced Kashmiri Hindus and so on.

It was expected that the BJP at least would take a stand different from that of other political parties. But, sadly, it has been giving overt and covert support to the Kashmiri parties, which, on the one hand, attack the Indian Constitution and Indian laws, and on the other, bat for policies, which do not suit the people of Jammu and Ladakh as well as Kashmiri Hindus and refugees from West Pakistan and Pakistan-occupied Jammu and Kashmir.

Even the state Governor N N Vohra only talks about that political aspect that suits Kashmir and Kashmiri people. It talked about the state’s special status, sub-continental peace and reconciliation with Pakistan and separatists. There is no reference whatsoever to the political aspirations of the people of Jammu and Ladakh in the Governor’s speeches and statements. The concern of the civil society in Jammu needs to be viewed in this context.

So, it was no wonder then that people of Jammu have appreciated the views of Lt Gen Hasnain(who is associated with Vivekananda Foundation, New Delhi ) and expressed hope that he could influence the policy-planners in New Delhi.