JNU Controversy: It's An Open-And-Shut Case 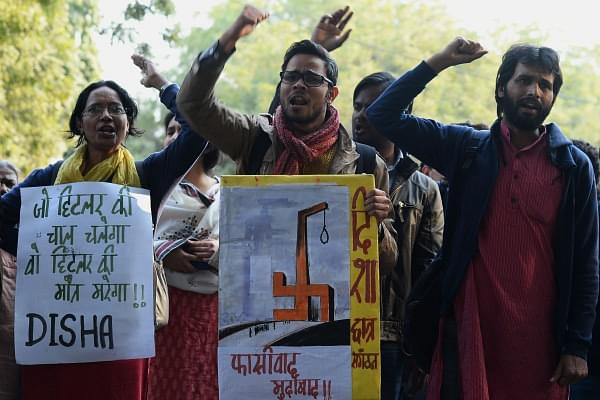 The Jawaharlal Nehru University, scene of a confrontation between students protesting the arrest of their union president, and the government, which has taken a strong line against anti-national sloganeering on campus, has drawn varied responses from commentators.Here are some of them:

Abhinav Pandya (He has a Masters degree in Public Policy from Cornell University. His specialisation is in international development studies. Currently, he is based in New York, working with United Nations)-

JNU students and the assortment of left wingers in India hardly wink an eye before calling the PM a mass murderer. Has the Gujarat carnage been proved in the highest courts of India? What about killers like Yakub Memon, Bhat and Afzal Guru? They were found guilty in acts of terrorism after the most fair and honest judicial trial. They were, however, hailed as the voice of the oppressed and seen as martyrs killed in the most ruthless manner by India.

What more is needed to bury heads in shame when dreaded Jihadi terrorists like Hafiz Saeed and Asiya Bibi raise suicide bombers? Bleed innocent Indians? Support minority killings in Pakistan? The most regressive mediaeval laws for females? It is the greatest insult to our armed forces and the real martyrs who came from poor families of rural India and who have laid down their lives for the well-being of the populace.

Secondly, the slogans were provocative and a blatant incitement to violence. One cannot expect the citizens of India to sit quiet over slogans which openly invoked support for the destruction of India. By any standard, this event, all the sloganeering and the causes espoused, are highly inflammatory and provocative. They are as provocative as the communal speeches of Praveen Togadia and Owaisi brothers.

If Kamlesh Tiwari could be framed under the National Security Act for defaming the Prophet (which I personally feel is the suppression of free speech), then what is wrong in arresting Kanhaiya Kumar, who is leading a group that wants the disintegration of India? I think it a fair legal action. They must be subjected to it.

I will address the warped logic which has been used to justify the whole act. Firstly, freedom of expression is not an absolute right. Under article 19 (6), it is subject to reasonable restrictions in the interest of law and order and public morality.

They were fighting against colonial rule that had curbed all kinds of freedom. It is not the case anymore. We are living in a democratic country that has free and fair elections and that gives fundamental rights to its citizens. If one has objections with the nature to judicial trial of Maqbool Bhat, Memon and Afzal Guru, they can be raised in a parliamentary manner. There is hardly any need to wish India’s destruction to register your protest.

What kind of freedom are these radical left groups in JNU advocating when they shout slogans like “India Go Back” and “Kashmir Ki Azadi Tak, Jung Rahegi”? Does the progressive politics of the radical left in JNU reflect ‘anti-national designs’ and support those who feel proud of being anti-India? What kind of intellectual line questions the convictions subjected to fair legal trial by India’s highest court? Is it not contempt of court?

Are they not aware of the horrendous violence in Kashmir due to Islamic militancy? Moreover, how can the slogans of freedom for Kashmir even be raised when the very issue stands closed with its integration with India after the ruler of Jammu & Kashmir signed the “Instrument of Accession” (1947). These are all ‘legal facts’ based on documented evidence with no ideological bearing. Why doesn’t the radical left in JNU attempt to learn from them?

This is not the first time that these left radical groups are in the news. The current controversy is the logical culmination of ‘hatred politics’ that they have been consistently celebrating for many years. These are the same people who were engaged in celebration when 76 Indian jawans lost their life in a Naxal attack in Dantewada, Chhattisgarh (April, 2010). In addition, the radical left groups organise Mahisashur Diwas during the same time of Durga Puja celebrations in JNU and brings posters portraying Goddess Durga in a bad posture.

In the last few years the politics of the radical left has reached a ‘new low’ due to their ‘senseless character’ and a desire to construct ‘false narratives’ in the campus. In the name of JNUSU (Jawaharlal Nehru University Students Union) they have every right to campaign against Modi in Varanasi and welcome Syed Geelani, Kashmiri separatist leader, in JNU. But these groups zealously oppose other student groups when they invite Yoga guru Ramdev for an academic event.

Basically the radical left in JNU has ‘lost the intellectual vigour and honesty’ to raise real issues concerning the larger student community. Their failure to work for student interests compels them to collude with the JNU administration and create false logic on student facility issues.

The radical left has no answer on construction of new hostels, timely delivery of scholarship, student safety and campus wifi issues in JNU. This is the reason for the decline in their electoral strength and popularity among students. Still, they find no problem in propagating their ‘politics of hatred’ in JNU.

They organise public meetings and are often engaged in spreading ‘hate literature’ in order to create ‘false narratives’ and divert attention from real campus issues. The ‘atrocity literature’ that they have produced in their public meetings, always accuse the  Indian state and society at large of wrongdoing. All this has been done time and again and brings disrepute to Indian society.