JNU, Sonepat, And The Crisis Of Democracy 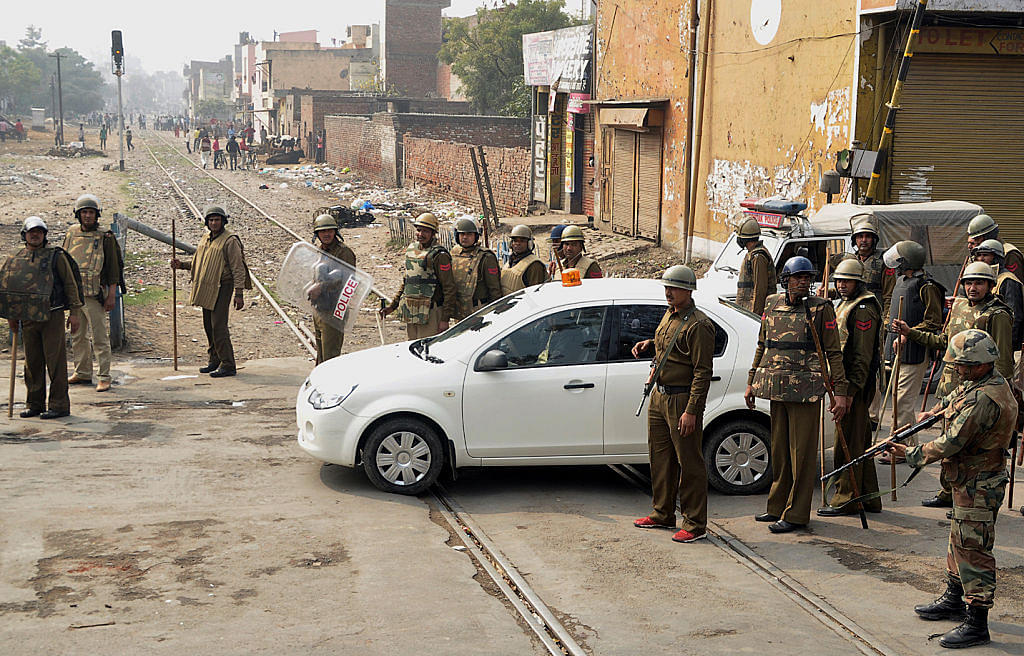 India is in a state of rage these days and seems very united against any threats to its unity. Countless messages offering to teach lessons to anyone who dares attack or break India are getting posted and shared on social media. Yes, as a nation, we are ready to crush any voice that attacks the integrity of India.

However, when this steel-like resolve faced its first encounter with reality, it chose to look away. When the Haryana violence happened, not very far from JNU, it failed to shake anybody except the people who were at the receiving end.

A section of the Jat community demanded that they be treated as backward class and some members of the community chose to convey the message in their own style, using a lot of force and show of strength. The result was significant. As per the official reports, around 30 people died, business worth INR 34,000 Crore was affected, and murkier details of violence and arson started emerging as the dust settled down.

However, these were met by equally deafening silence. All social media activists, who were threatening to tear anyone into small parts in case of a threat to the motherland didn’t seem to care.

In Organisation Building, one important rule is the “Hot Stove” rule given by Douglas McGregor. The hot stove never discriminates on the basis of status, rank or caste, and follows a simple rule - “When you touch the hot stove, you burn your hand.”

An effective organisation needs to be like a hot stove and treat every employee on the same terms in order to install a sense of fairness and justice. Any organisation that is not fair to its employees, falls apart over a period of time. Organisations constantly face this dilemma about being fair or being submissive to power groups. The nation too is a super set of organisations and go through the same dilemma.

India, touted as the world’s largest democracy, falls apart when it comes to the matter of fairness and providing equal rights to all. There are millions who are languishing in jail without any bail or hearing on flimsy cases while the powerful ones don’t even appear in court, let alone be arrested—be it R.K. Pachauri or Supreme Court judges accused of molestation. India follows the principle of the ‘Animal Farm’ where all are equal but some are more equal than others.

This method of selective governance has served India’s ruling elite very well so far. The State rules not only through police and judiciary but also through media management. However, the recent advances in social media and crowd sourcing of news are disrupting this power equation. Hence, the sense of fairness becomes more critical and important in these uncertain times.

There is no way one can condone the shouting of anti-India slogans and talking of breaking India at an Indian university and it does deserve suitable punishments, but so do the rioters.

Unfortunately, not a single political party condemned or raised the issue of Jat violence even when Parliament was in session. Was it simply vote bank politics or sheer contempt for justice?

Studying the chain of events, it is clear why a certain class of citizens suddenly feels alienated and persecuted. Would there still be this same silence if looting, arson and goonda-ism was committed by say, a section of Muslims? Or by a section that is not large in number and politically insignificant? Will we be sitting silent, while going ballistic over some slogans?

India is facing its moment of crisis and this crisis didn’t start with Prime Minister Modi. It started much earlier when India was ruled by a set of people whose moral compass worked depending on the expediency of their political agendas; when Indian judiciary tucked in its comfort zone chose to look sideways and focused more on control of its privileges than dispensing justice; when government executives forgot that they had taken an oath on the Constitution and not for a political class or ideology; and when sitting administrators forgot the need to give equal justice to all.

The culmination of all this decay for 60 odd years has created a situation where a statement like the “law will take its own course” is met by bored yawns - by the guilty and the victims alike. The Supreme Court’s statement that public property that was destroyed shall be recovered from hooligans is met by scepticism since one doesn’t remember when was the last time justice was dispensed to common people in such cases.

If the role of the State gets reduced when it comes to security and application of law, the existence and validity of the State becomes questionable. If the State fails to provide security, food, health and a sense of justice, the reason for its existence becomes tenuous.

We may dismiss the Haryana incidents as random events. However, another set of random events, the Gujjar agitation, happened sometime back. So, a series of such random events should be taken as harbinger of a trend. Declining farm incomes, unemployment, coupled with hyper media connectivity has created a scenario where expectations are high and patience is low.

While these agitations are worrisome, authorities should also worry about the nature of these protests, which are growing more and more violent and damaging.

Elites and intellectuals in India have generally dismissed the possibility of a Class War in India on the fact that none has happened so far despite so much victimization of backward classes and scheduled castes.

However, the reason is very different this time. The lower classes have been oppressed for more than a millennia. Now, the sudden economic shift has changed the game. Poor returns from agriculture and emergence of cities have turned the social equation upside down. The upper classes too are feeling the heat due to the changing economic conditions. Their status as higher classes is threatened. Given the historical reasons, they are not able to stomach this sudden change in their status. Hence, the revolt by some upper classes will be more violent.

The perceived lack of justice in the Indian legal system adds to a sense of moral bravado where people no longer care about any rule of law or fear the possibility of punishment. This has created a disturbing trend and hence it’s even more important that a sense of justice is created and guilty be punished irrespective of vote bank, caste or religion.

India is staring at an era that is going to become more violent, more chaotic if the powers at the helm don’t see the signs and a sense of justice and fairness isn’t installed. Rather than these being some rare events, these protests are going to become routine.

Be afraid. Be very afraid!