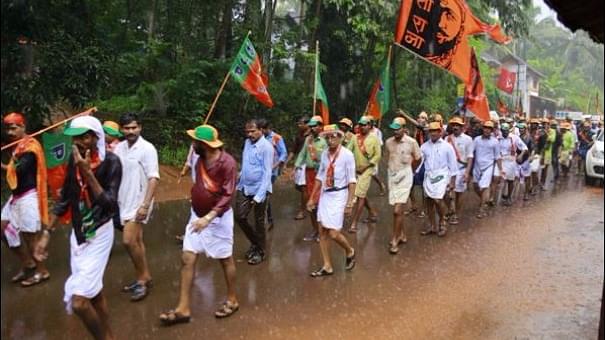 Pinarayi, a small village in the Kannur district of Kerala, is significant for the Marxists. It was in Parappuram, near Pinarayi, where the communist organisation in Kerala started its public operations in 1939. Since then, Pinarayi and the nearby areas have acted as the strong bastion of communist politics in Kerala. Nothing but red flags was allowed to fly. Dissent was unheard of in the villages controlled by the communist party. Opposing voices were crushed ruthlessly. The alleged killing of Uthaman and Remith – a poor father and his hapless son in this area by the Marxists, sparked the 14-day ‘Jana Raksha Yatra’. The yatra, which passed through the village of Pinarayi highlighting the communist murder politics in Kerala, was a turning point in the politics of the state.

After the anti-Emergency movement led by the Rashtriya Swayamsevak Sangh (RSS) in 1977, there was a massive flow of Marxists towards the Sangh. There were mainly two reasons for this. One, the Communist Party of India (Marxist) manipulated, and CPI was in the government with the Congress during the Emergency years. Two, since the Sangh was in the forefront in confronting Indira Gandhi, hundreds of swayamsevaks were imprisoned in Kannur district. The readiness and commitment of the swayamsevaks attracted the people who were embittered by the hypocrisy of their leaders.

As in any communist-dominated region, here also the Marxists got upset with the recalcitrant cadres. They panicked and the violent response to the exodus of supporters was to eliminate the best among the RSS workers so that the organisation ceased to function. Sixteen RSS functionaries in Kannur district were killed between 1977 and 1980. On 2 September 1978, Panunda Chandran, a young Sangh activist, was murdered while conducting shakha in Panunda, six kilometres away from Pinarayi. Large-scale aggression followed this incident. The Marxist party workers unleashed their reign of terror by targeted killings of RSS workers. A lot of efficient swayamsevaks had to flee the area.

Later, a prominent worker of RSS, Pinarayi Chandran, returned to his home in Pinarayi, a few metres away from the present Chief Minister Vijayan's home. He became Koothuparamba taluk karyavahak of the RSS. His arrival boosted the energy of the workers in exile, and they returned to their home turf. Another active volunteer in the area, Panunda Surendran, was killed in 1980. He was a close associate of Pinarayi Chandran and in 1984, Chandran who was affectionately called in Sangh circles as ‘guru’, was also murdered. Many brave men sacrificed their lives in the killing fields of Kannur for exercising their right to dissent. Nowhere in India were so many innocent lives lost for believing in a political ideology.

Today, through the same streets of Kannur, thousands of BJP supporters marched, while the communists watched on as helpless spectators.

Importance of the padayatra for the BJP

The Bharatiya Janata Party (BJP) is a victim of intolerance and political apartheid in the country, and Kerala stands at the number one position. Communists had also killed Congress workers in Kannur, but despite having many powerful members of Parliament from Kerala, the Congress leadership never cared to expose the Marxist violence. Even though the state has not provided a member of Parliament (MP) to the Lok Sabha for the BJP, the MPs from the rest of India were keen to advocate for the victims of ‘Red’ terror.

It was Meenakshi Lekhi of BJP who drew attention to the heinous human rights violation by the CPM in the Parliament, five times in a row. By organising a grand padayatra with national leaders starting from Kannur, the BJP demonstrated its concern for the atrocities taking place in Kerala and the will for bringing peace and harmony in the state. Time and again, the party proves that it is not a party which aims only at vote bank appeasement politics but concerned about the well-being and integrity of the people of India, whether they help them win elections or not. The cadre is important.

State BJP president Kummanem Rajasekheran, Uttar Pradesh Chief Minister Yogi Adityanath and prominent leaders walked kilometres with ordinary karyakartas. It was a new experience for the people of the state accustomed to national leaders flying down as elite and maintain their elitism throughout their visit. BJP president Amit Shah's vision and RSS functionary B L Santhosh’s organisational strategies turned the yatra into a success. Santosh’s experiences as the helmsman of the organisational activities in Karnataka enabled him to rope in many leaders from the adjacent areas of Kerala. This coordination with the neighbouring state has a meaningful impact and is visible in the party. Introduction of senior leaders like Nalin Kateel, MP of Dakshina Kannada who understands the pulse of Malabar region, has irritated the Kannur leadership of the CPI (M).

Further, the Marxist party is worried about the cases against Kannur district secretary, Jayarajan. The agencies have cornered him and his days outside the central jail are numbered. Although the mainstream media tried their best to hush up the violent politics of communists in Kerala, relentless campaigns and efforts of the BJP leaders even from outside the state have shattered the confidence of the CPI (M). The crowd drawn by the Jana Raksha Yatra even in the remote areas of Kannur is a testimony to the growing faith of the people of Kerala in the party that runs the country.

Radical shift in the slogan

The yatra started when Kerala has been passing through a peculiar situation of social turbulence. A day before the yatra, the state president visited Akhila, whose religious conversion and marriage are a matter of dispute before the court. The issue of love jihad has shaken the Kerala society. Jana Raksha Yatra has taken up the jihadi terror threat in the state as a theme. Fielding Adityanath on the second day itself shows the shift of the party's explicit focus on the saffron core politics in Kerala. Using the anecdote of 'Mareecha' from the Ramayana to describe the jihadi youth who pass off as Romeos, the BJP has come out with an open defence of Hindus of the state like never before.

Further, Akhila’s father, Asokan, was lamenting about him being a communist and told it was because of her being the daughter of a communist; she became a victim of love jihad. Hindus of Kerala have been pondering over the gruesome events happening around them. The orchestrated efforts by various leaders and intelligentsia of the leftists to send the girl with the radicals under the guise of rights and freedom have created great resentment among the Hindu supporters of the communist party.

The communist party which arranged special facilities for namaz for its leaders from the Muslim community, and whose leaders bowed before the pope and clergymen, took disciplinary actions against Minister Kadakampally Surendran and Ritubrata Bannerjee for visiting the Guruvayur temple. A few years ago, the party had forbidden its leaders from performing Ganapati hawan and some other Hindu rituals. However, the Christian leaders are free to visit churches and participate in ceremonies. This double standard of the party regarding religious freedom is irking the Hindu comrades.

The BJP has identified this opportunity and has come out in the open shouting slogans of Hindutva. The readiness of the BJP to rise to the occasion to resolve the concerns of the majority community is a good sign. The padayatra by reaching out to the commoners will help create ripples in the state, bypassing the established media which is visibly hostile to Hindutva politics. Although the Malayalam media unanimously tried to black out the yatra, the panic of the leftists is visible in the airtime and print space; and the media has been dedicating itself to the propaganda against RSS and Adityanath.

Although the CPM leaders repeatedly told that they are not afraid, the routes which the yatra took were filled with banners and billboards in English aimed at the national BJP leaders. If it had been meant for the cadres of the Marxist party, the posters would have been in Malayalam. However, Adityanath's speech ascertained the significance of Kerala in Hindu history. Kerala is believed to be found by Maharshi Parasurama, and the Uttar Pradesh Chief Minister acknowledged the value of the region from where great sages like Shankaracharya, Sree Narayana Guru, Chattambi Swami, Nithyananda Swamy and Mata Amritanandamayi have guided the light of dharma for the entire world. Even though Kerala has not elected any members of the BJP to the Parliament, the party explicitly has proven with the massive yatra, 'Kerala mange azadi' slogans on the lines of Jawaharlal Nehru University’s 'breaking India' will not be overlooked.

While launching the Jana Raksha Yatra, BJP president Amit Shah squarely held Chief Minister Pinarayi Vijayan responsible for the numerous political murders of RSS-BJP workers. The villages in Kannur controlled by the communist party were impermeable to any outsiders and dissenters. Even a few months ago, people had to seek refuge in a temporary camp since the Marxists had destroyed their houses and valuables. The Jana Raksha Yatra has defied the authority of the communist party in the villages of Kannur. Saffron flags with Chhatrapati Shivaji's picture were flying in the towns of Kannur.

The yatra is just the beginning – the beginning of the end of the murderous political games led by a cruel ideology that has killed many innocent people. Leading the yatra through Pinarayi is not only about proposing an opposition to Vijayan, but also about remembering its unsung heroes like Pinarayi Chandran.