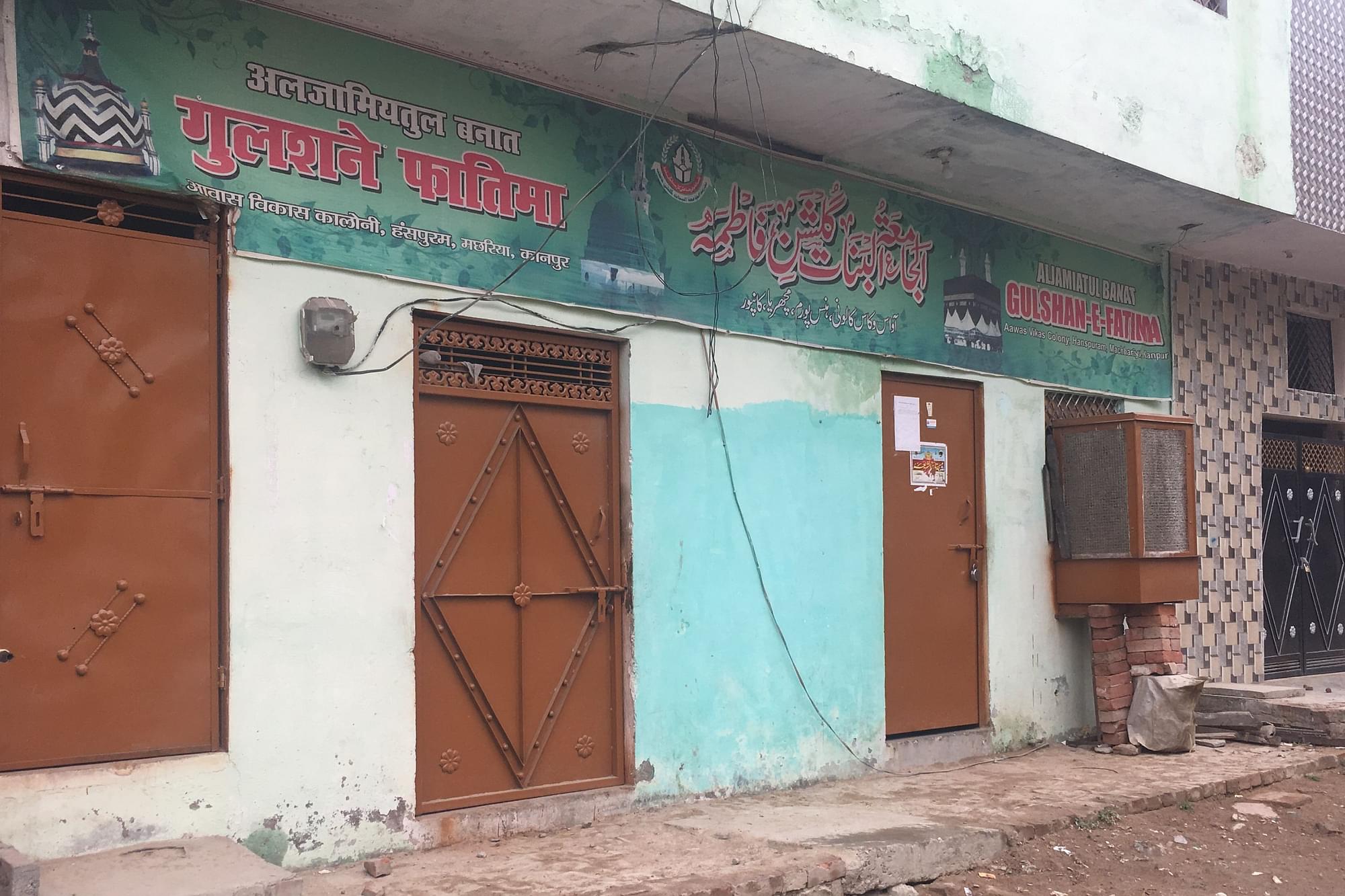 The madrassa where the 15-year-old was allegedly raped.

A notice pasted on the gate of a madrassa in Kanpur’s Naubasta area reads: This institute is neither registered with the state madrassa portal nor connected in any way with the district minority welfare office. Parents who are sending their children here should take an informed decision.

The notice, in Hindi, was put up on 10 June, a day after the police arrested the 40-year-old madrassa owner Javed for allegedly raping a 15-year-old student. The all-girls institute, named Al-Jamiatul Banaat Gulshane Fatima, was scheduled to open after Ramzan holidays on 15 June but has been locked since.

Girl Says She Was Taken On Pretext To Fill Some Form, Raped

The victim, Shagufta (name changed to protect her identity), lives less than a hundred metres away. Her father is a wall painter and mother a homemaker. She has a younger brother, who studies in a government school. The family shifted to this Muslim-populated area of Awas Vikas Hanspuram colony in Naubasta’s Machariya village about two months ago. Locals said the colony has about 35,000 voters – most of them Muslims – and four or five madrassas.

Shagufta was studying a religious course meant for girls called Alimah. According to her complaint, around 5.30 am on 9 June, Javed stopped his motorcycle outside her house and demanded she goes with him to the madrassa to fill some form. She obeyed, but in the madrassa, Javed raped her and threatened to kill her if she informed anyone. The complaint mentions two more names as accused – Abda Islam and Sheeba, both women.

The family says Javed had just returned from his hometown in Matiamau village in rural Kanpur’s Akbarpur tehsil after celebrating Eid. “He told Shagufta that students were filling some bank forms and she needs to join them. We later learnt there was no one at the madrassa other than those two women,” the victim’s mother told this correspondent.

Shagufta told her mother that Javed raped her for an hour. She cried but none of the two women came to her rescue. She somehow managed to escape.

Shagufta came home crying and narrated it to her mother, who immediately called up Javed. “He dismissed the allegations. He told me my daughter is lunatic [paagal],” the mother said. “When I insisted she isn’t, he said do whatever you want.”

Moments later, the mother received a phone call. It was Abda on the line.

“Abda said take Rs 5 lakh or 10 lakh but don’t go to the police. She suggested I forget all about it,” the mother said. “But how could I? It’s not just about my daughter. It’s about all the 50 girls studying there.”

Locals said that Abda is Javed’s maternal aunt and Sheeba is her daughter. While Javed owns and runs the institute, the women are employed as teachers. The residential institute has about 55 girl students, most of them from outside Kanpur.

According to a cousin of Shagufta who lives opposite the madrassa and often visited her there, the girls attend classes in a room on the ground floor and, in the night, are accommodated in two small rooms on the first floor. Shagufta was among a few day scholars. “Shagufta said she was raped in the ground floor room where the teachers sleep,” the cousin said.

Despite pressure, the victim’s family filed a first information report in Naubasta thana the same day in their daughter’s name. Javed was booked under IPC sections 376 (rape) and 506 (criminal intimidation) and relevant sections of the Protection of Children from Sexual Offences (POCSO) Act.

The two women were booked under 506 but not arrested. Javed continues to be in jail.

Accused Confesses, But Says He Had ‘Nikah’ With Victim

As per a police officer in know of the case, the cleric confessed to making a sexual relationship with the girl but said that he had done no crime as he first did ‘nikah’ (a Muslim marriage) with her. The cleric told the police the girl was not minor but 19.

The girl’s family, on the other hand, has produced her birth certificate showing her date of birth as 19 March 2004, which makes her 15 years of age.

When asked if Javed has produced a copy of the nikahnama, the officer said he has not and that it is of no concern to the police. The officer said that on their part, the police have carried out the formalities such as getting the girl’s medical examination done and statement before the magistrate recorded. He said the accused, however, may bring up the nikah justification later in court.

It is for the same reason that the family is worried. The girl’s father told this correspondent that fellow community members are siding with the cleric and spreading rumours that his daughter had indeed been married off to him. “We are being accused of framing Javed for money. No one is supporting us,” he said.

The family has even temporarily shifted out of their rented house to “avoid the taunts”.

“My husband is 34. How can I bring a son-in-law older than him?” the mother said.

The father said he feared that his daughter had been made to sign on some paper. But he still contested Javed’s claim by arguing that a valid nikah requires a kazi and four witnesses – two from either side – and that a copy of the nikahnama is provided to both parties. “None of this was done. So how can I accept this as a valid nikah, even if it was done?” he said.

However, a Muslim women’s rights activist this correspondent spoke to, said that the community does not follow a standard procedure for nikah and there is no standard format of nikahnama. Noorjehan Safia Niaz, who co-founded Mumbai-based organisation Bharatiya Muslim Mahila Andolan, said the community accepts as valid the nikahnamas issued by any madrassa or mosque that are nothing but ordinary white papers with the institute’s name printed on them and columns to fill. And such nikahnamas have been routinely accepted in courts.

This, in fact, is noted in Mst Zainaba Vs Abdul Rahman 1945 case – that there is no particular form in which the proposal for nikah and its acceptance is made. Even oral transactions are valid. Further, as noted in Quazi Mohd Najmuddin Hussain Vs State Of AP 2005 case, presence of a kazi is not necessary for marriage.

Also, according to Muslim Personal Law (as cited in the book Mulla: Principles of Mahomedan Law), absence of witnesses doesn’t make a nikah void; it merely makes the nikah ‘irregular’ and doesn’t bring any criminal punishment. The law also says that a Muslim girl who is 15 years of age and has attained puberty is eligible for nikah without the consent of her parents.

A Muslim law scholar, on the condition of anonymity, told this correspondent that it’s fairly easy to manufacture nikahnamas to legitimise rape, especially if the culprit is himself a cleric.

In 2015, a Muslim man from Ahmedabad who was charged with raping a 15-year-old girl from the same community, was acquitted by a sessions court after he produced a nikahnama. The girl had delivered a baby and the DNA test had established the man, Mohammed Zaid Mansuri, to be the father, thus providing a strong evidence of sexual relationship with the minor.

Niaz said that so far the victim in Kanpur case remains consistent on her rape charge and maintains that the nikah – even if done – was by force, the cleric stands accused of rape.

Imran (name changed), 30, is a cousin of Shagufta and resident of the same colony. He said the girl’s father and he have been doing all the running around in the absence of community support. “No one even accompanied us to the police station,” he said.

He said it was in his presence that Javed told the police about the alleged nikah. “Mausi [the girl’s mother] couldn’t control her anger and hit him twice in front of the police,” he said.

Imran introduced this correspondent to his friend Shahnawaz Khan, who he said is among the few residents standing by him. Khan said that Javed enjoys local support as he is rich. “He started running this madrassa out of a rented house. Now he has bought a two-storey building for over Rs 20 lakh. He also bought a truck recently,” Khan said.

“Deen ke naam par paisa milta hai. Hum zarurat ke liye maange tab bhi nahi milta [the rich give money in the name of religion. We don’t get it even if we need it for our needs],” he said.

Khan said that Javed should be punished and made an example of as people like him bring bad name to the entire Muslim community. “He sports a long beard. When men like him do such things, all bearded men are looked at with suspicion,” he said.

Khan said that last year, a 12-year-old girl jumped off the second-floor of the madrassa in a bid to escape. He said the girl jumped to the first floor and then to the ground and ended up with broken bones. “That time, Javed told everyone around that the girl was lunatic,” Khan said. “Her brother was called from Kanpur dehat and he took her away. No police case was made by her family. Today we wonder if she was a victim too,” he said.

Mohammad Adil, a resident who joined Imran and Shahnawaz in conversation, said the latest case has left the parents worried. Adil said her daughter studied in another madrassa in the colony but has now quit. “She will study at home now,” he said.