Karnataka 2018: Why Sriramulu Is Important For The BJP 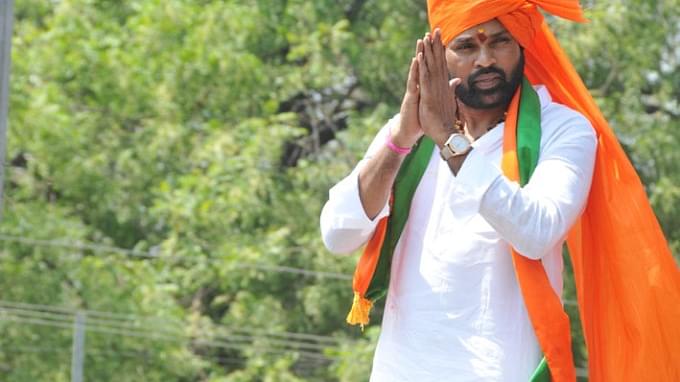 B Sriramulu (Pic from One India)

He is second only to B S Yeddyurappa in the Karnataka Bharatiya Janata Party (BJP). This is B Sriramulu, the BJP’s candidate from Molakmuru and Badami. He is unmatched in terms of popularity among his followers and second to Yeddyurappa when it comes to traction among the crowd.

The BJP, this year, has projected him in a big way and the fact that he is young and has immense support from the tribal community has added to his star value in the campaign. Although the BJP did not say it officially, there were murmurs in party circles a few days ago that he could be projected as the deputy chief ministerial candidate in a bid to bag the tribal votes from the Congress.

Sriramulu has over the years risen through the ranks. In 1999, he played a big role in the campaign by Sushma Swaraj during the Lok Sabha polls. From here, he entered into the mainstream and later rose to fame as a close aide of Janardhan Reddy. When the BJP came to power in Karnataka in 2008, he was made minister. However, in 2011 he resigned as MLA, citing humiliation to his mentor Janardhan Reddy. In the 2013 elections, he contested as an independent from Bellary rural and won the seat. He then floated the BSR Congress.

However, by 2014, he was back in the BJP and went on to win the Bellary Lok Sabha seat. For the 2018 elections, he along with Yeddyurappa, were the only sitting MPs to be given tickets for the assembly contest. This, itself, is a clear indication of the importance Sriramulu enjoys within the party.

When the BJP announced its first list of candidates, it did take everyone by surprise when Sriramulu was shifted from his comfort zone in Bellary rural to Molakmuru in Chitradurga. Sriramulu had represented Bellary city for one term before he shifted to Bellary rural, which was among the five seats reserved for Schedule Tribes (ST) post the elimination exercise in 2008. He won the rural seat thrice-2008, 2011 (by-election) and in 2013.

The BJP had a clear strategy in shifting him out of Bellary. The party felt that if he is in Chitradurga, he would be able to cover a larger area and also influence a bigger electorate in Bellary and Davangere which border Chitradurga. It must also be noted that Sriramulu was instrumental in ensuring victories of his candidates in Molakmuru, Kampli and Kudachi in Belagavi in the previous elections. Sriramulu who hails from the Nayaka community, is considered as a hero of the community. Davangere, Chitradurga and Bellary have a considerable Nayaka population, which Sriramulu can influence and hence this move to shift him out of Bellary made perfect sense for the BJP.

Sriramulu is also seen as a perfect counter to Siddaramaiah’s AHINDA policy (a Kannada acronym for minorities, OBCs and Dalits). Being a tall Scheduled Caste (ST) leader, he is expected to take on the vote bank that has been built by Siddaramaiah. In Bellary and Chitradurga, there are an estimated 8 lakh ST votes. Further in Bellary, five assembly segments are reserved. The BJP is also mindful of the fact that in 2013 when Sriramulu had quit the party, it managed to win just one of the six seats in Chitradurga while in Bellary, it lost seven assembly segments.

Sriramulu, however, does not restrict himself to only a section of the voters. He carries an image of a do-gooder, which has been a hit among the voters in all the elections he has contested. The voters cite examples of his goodness and say that many a time he has paid their electricity and water bills. The mass marriages that he conducts very often are also a big hit among the voters.

The Sriramulu of 2018 is very different from the Sriramulu of 2013. In 2013, he was viewed as a close aide of the Reddy brothers and a strongman restricted to Bellary alone. This year, he is one of the BJP’s top campaigners. He has campaigned in nearly 90 constituencies so far, which includes Chamarajanagar and Mysore in the old Mysore region.

Sriramulu’s close association with Janardhan Reddy, who has been campaigning extensively for him, has not come in his way. The BJP has projected him as a tall leader and in the bargain has managed to de-alienate him from the Reddys. Sriramulu, however, maintains that Reddy is his childhood friend. We have grown up together and his presence will have no negative impact on the campaign. I have been with him through good and bad times. Even when he went to jail, I stood by him, Sriramulu also says.

The Battle At Badami

The battle at Badami has now turned into a fight for prestige. Sriramulu’s entry into the fray has kept Siddaramaiah busy around this constituency. The BJP’s game-plan was to restrict the star campaigner of the Congress to his two constituencies.

The total number of voters in Badami is 2,12,187. The Kurubas community Siddaramaiah belongs to holds the key to the chances of any candidate. The Kurubas and Other Backward Classes (OBCs) alone constitute 42,000 of the electorate. The other major communities here are the Lingayats and Pancham Lingayats. While the Lingayats have traditionally voted for the BJP, the big fight would be for the Kuruba votes. For Siddaramaiah to have the upper hand in this constituency, he would have to ensure a division of the Lingayat votes. This is largely because the entry of Sriramulu would ensure that the ST votes are split as he is viewed as a tall leader of the community. Apart from the votes of the Kurubas, the BJP would also bank heavily on the votes of the Valmiki community, Reddys and the Lambanis. Sriramulu could be instrumental in bagging both the votes of the Reddys and Valmikis as he caters to both communities with ease.

Sriramulu would also be banking on the BJP’s strength in the Taluk and gram panchayats in this constituency. BJP MP Shobha Karandlage had said that it appears as though Siddaramaiah had been fooled into contesting from Badami. Twenty out of the 26 taluk panchyats are with the BJP. A majority of the gram panchayats are too with the BJP, she also says.

While some say that fielding Sriramulu was not with an intention to win, the campaign on the ground indicates something different. It does not appear as though the candidature of Sriramulu was only to keep Siddaramaiah locked at Badami. As Sriramulu hit the campaign trail, over 200 office bearers from Valmiki-Nayaka organisations descended upon the constituency to back Sriramulu. They have been travelling the constituency and have undertaken a door-to-door campaign to educate the people, especially those from the tribal community. One of the key points raked up during the campaign is that the Congress had not extended reservation for the Valmikis in education and employment despite an order by the High Court.

Sriramulu says that he is confident about the SC/ST community backing him. He said that the voter is aware that Siddaramaiah came to this constituency for the fear of being rejected in Chamundeshwari. He says that his candidature was decided after taking into consideration several equations. The BJP usually does not offer two tickets to one person in the assembly segment. But the party wanted the right candidate to represent Badami, he says.