Karnataka Assembly Elections 2018: Here Are The Numbers To Watch Out For 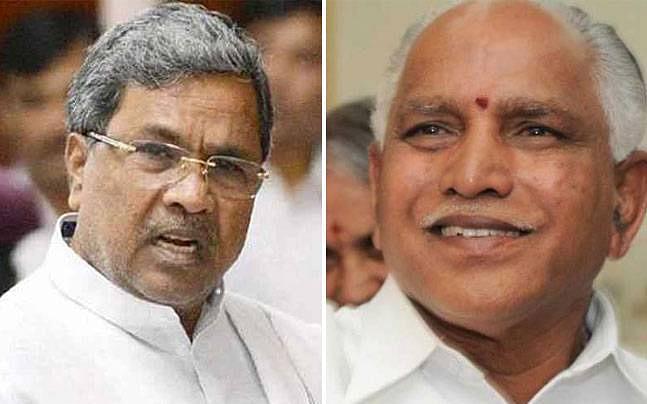 Siddaramaiah and B S Yeddyurappa

The clanging of caste and religion cymbals marks the approach of another legislative assembly election in Karnataka next month (May). While number-crunchers dive into their demographic tables, and journalists fall over each other to collect succulent sound-bites, political statements are scrutinised from a hundred angles and new charts are plotted to answer a few simple questions: Will the Bharatiya Janata Party (BJP) be now reunited under B S Yeddyurappa once more, secure the popular mandate they lost so painfully and comically in 2013? Will Karnataka’s Congress Chief Minister Siddaramaiah be successful in retaining the party’s majority – something no party has managed to do since 1978? Will we see at least a partial resurgence of Deve Gowda’s Janata Dal (Secular) or JDS, or will the party be relegated to the ‘others’ column? Will any single party get past the magical halfway mark of 113 seats?

But first, let’s see the recent electoral history of Karnataka in two charts:

And yet, the degenerative nature of Indian electoral practices of the past half century, highlighted starkly and tragically by vote-bank politics, forces serious analysts to ask a few, more basic, questions: Which way will different communities vote, and to what extent? Who gets the Muslim vote? Who gets the non-Lingayat other backward class (OBC) vote? Will the Vokkaligas stick with the JDS? How much is the Dalit vote?

There is something deeply abhorrent about identity politics, which makes the sentient man shrink in revulsion. It is divisive, immoral and wholly counterproductive to the needs of society. Yet, the run-up to this forthcoming round of provincial elections in Karnataka, for example, has been marked by a Congress demand for a state flag (don’t ask why!), the usual anti-Hindi rhetoric, and a potentially fatal move to have the Lingayat community – firm and principal supporters of the BJP – notified as a separate religion. No matter, that the ‘Linga’ in ‘Lingayat’ is a symbol of Shiva. Not a word about the rusting of the fabled ‘steel frame’, or any plans for its refurbishment; not a word about the fiscal deficit; not a word about the decline in growth rates; not a word on investment. Perhaps, nothing will change until a new era of enlightenment dawns upon our electorate.

At times, it beggars belief, as to why the Congress would ever stride down this ugly path. But with the Karnataka legislative elections due in May, it is equally important to understand how these efforts are being played out, and with what consequences. And, believe it or not, much of this can be demonstrated in a single plot of party vote-share versus seats won:

The data shows that it is far more difficult for Congress to win elections in Karnataka, than it is for either the BJP or the Janata Dal – as evidenced by the right shift of the blue, Congress curve. Vote for vote and seat for seat, the Congress lags far behind both the BJP and the JDS in this regard.

To make matters worse for the Congress, there are other problems: An abrupt upward or downward shift in seats won, for roughly the same vote share, indicates either a multi-party contest, or, the bulk shift of community votes, or both. For example, for a 2 per cent vote shift, the number of seats they won changes by 57. That is a huge number, reflective of the inherent narrowness of their victories and losses. Perhaps, it is precisely such numerical sensitivity to fortunes, which decides the tone and tenor of their electoral campaigns.

The BJP, on the other hand, shows a more even distribution of data points, more linearity of correlation between votes received and seats won. So too, the JDS, although it has not been a natural party of governance for some decades now, limping in the shadow of Gowda, who is still widely respected across the state.

The uneven range of results for the Congress, in the 35-40 per cent vote share band, points to more uncertainties; and these in turn, to the dire necessity for ensuring that identity politics is played out successfully. Without this, the party has rarely achieved the requisite success.

This point becomes more acutely prominent when the spectrum shifts from a multi-party contest to a predominantly two-party one. The more three-cornered the contest, the more the Muslim vote moves away from the Congress, and in turn, lowering the number of seats it gets. On the other hand, those elections which tend to squeeze out the JDS, like the ones to the Lok Sabha in 2009 and 2014, exemplify the Congress’s inherent disadvantage in a straight two-way fight. This is a nuanced point, and not at all without irony: the Congress does better in a three-way contest, than when it is primarily up against the BJP. An incongruity? Perhaps, but that is what the numbers show. And that is precisely why the BJP is yet to break into Old Mysore region – the stronghold of the JDS.

But can the Wodeyar wall hold back a saffron wave; might things change? A pointer to the probability of this is hinted at, in the results of the 2014 Lok Sabha elections: in Hassan parliamentary constituency, which was won by former prime minister Deve Gowda, the BJP came second in Kadur assembly segment. Of course, the BJP also polled only 5,000-odd votes in a couple of other assembly segments, reminding analysts that wishful thinking has no place in this business! But, in Chamarajanagar parliamentary constituency, retained by the Congress, and Chief Minister Siddaramaiah’s home turf, the BJP came a close second in all eight assembly segments, pushing the JDS vote down from 11 per cent in 2008, to around 3 per cent in some of the segments. So, absurd as it may seem, data analysis suggests that the more Congress poaches from the JDS, the more harm it does to its own chances!

There is a social explanation to this: in Old Mysore region, the more the Congress takes away the Muslim vote from the JDS camp, the more the traditional JDS Vokkaliga, OBC and Dalit supporters would be forced to vote for the BJP in counter.

Coming to Northern Karnataka: both old Maratha and Nizam dominions (still quaintly referred to as Bombay-Karnataka and Hyderabad-Karnataka respectively) have provided the bulk of the BJP’s success thus far. And it is precisely in these regions, that the BJP was nearly wiped out in 2013, as a result of the party being split by Yeddyurappa. He took away a good 10 per cent of the vote share, bringing it down from 34 per cent in 2008 to just 20 per cent in 2013; the other 4 per cent shifted allegiance, disillusioned, and the BJP’s tally came down from 110 in 2008, to 40. Nevertheless, the party appears to have refurbished its state unit, especially in these areas, to register a record 43 per cent vote in the 2014 Lok Sabha elections (equal to 132 assembly seats).

Equally interesting is the ‘others’ vote – a long-standing political tradition in Karnataka, which sometimes eats up as much as 20 per cent of the vote share. This eclectic brigade usually comprises rebels, splinter parties, vestigial units, misfits, and maverick independents, and they often have a decisive outcome on the results. Their impact ranges from 12-23 per cent, and can take away as many as 25-35 seats from the kitty. But, historical data also shows that when the ‘others’ vote share shrinks, the beneficiary is the BJP – as happened in 2004 and 2008. This is detailed in the table below:

Now, while the BJP lost in most assembly constituencies in coastal Karnataka in the 2013 provincial elections, incredibly, they swept every single assembly segment here in the 2014 Lok Sabha polls – yes, every single one from Karwar south to Mangalore. This was, of course, on the back of a skillful rapprochement between the BJP and Yeddyurappa, effected by Prime Minister Narendra Modi, and was a most commendable achievement. But it remains to be seen, if the 2018 assembly elections will mimic the 2014 general elections results – and if yes, then to what extent.

History tells us that much mimicry is probably not to be expected, except in the noise and theatre of an election. Thus, in conclusion, we may seek to answer the questions we posed at the beginning: