Karnataka Bypolls And B Y Vijayendra: Will Yediyurappa’s Son Succeed In Projecting Himself As A ‘Leader Who Can Deliver Victories’? 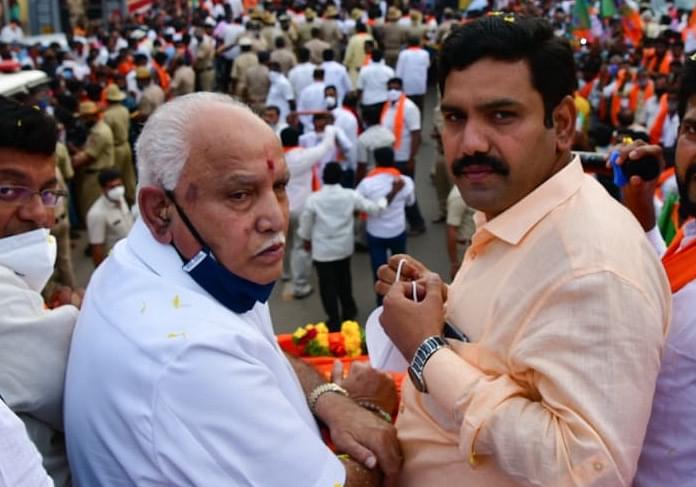 B S Yediyurappa and B Y Vijayendra

The results of the recently concluded bypolls in Karnataka will be out on 10 November.

It looks like they will be sealing the fate of the Janata Dal (Secular), whose campaigning too was lacklustre.

For the Congress, it was a question of the state party chief’s prestige as it is the first election after its ‘trouble shooter’ D K Shiva Kumar took over the reins.

For the ruling Bharatiya Janata Party (BJP), which seems confident of a victory, these polls mean much more than just additional numbers to its Vidhan Soudha tally.

The results, either way, will surely reorganise the energies within the party's state unit. This is a unit that is already said to have multiple factions backing their own respective leaders to be the next captain after B S Yediyurappa.

In the recent bypolls, as well as in those in December 2019, Yediyurappa‘s son B Y Vijayendra was projected as a ’young’ leader who was transforming a non-saffron, non-Lingayat seat into a stronghold of the BJP with aggressive campaigning, social strategy and organisational skills'.

This image was in contrast to the criticism levelled against him for his alleged involvement in matters of governance and for allegedly misusing his father’s halo.

Comparatively a novice to the field, the vice-president of the party state unit has chosen to work silently among the party workers, steering clear of the ‘heir apparent’ tag but rising as one, unfailingly, as he manages to garner support and steer the cadre in the old Mysore region that has always been a JD(S) stronghold.

Vijayendra was refused a ticket by the party high command during the 2018 elections from the Varuna constituency in Mysuru, where he was seen campaigning for the party in advance.

This was said to be, on one hand, the fallout of the turf war between Yediyurappa and the party’s national general secretary B L Santosh, and an on the other, a result of the attempt by the party to steer clear of the tag of ‘dynasty politics’ that it ridiculed the Congress for.

That had left the cadre upset. They wanted him pitched against the other scion in the ring — the son of former CM Siddaramaiah.

This was when he got working with the cadre and a year later, he was made in-charge of the crucial KR Pete bypoll, which was one of the 15 seats that saw a re-election owing to the defection of MLAs from the former coalition parties that brought down the Kumaraswamy government.

The victory of BJP’s Narayana Gowda’s was a blow to the Devegowda family since it was unimaginable for the BJP to break the K R Pete fort. The strategy was simple — voter engagement.

Vijayendra has implemented that yet again. In Sira this time.

In this bypoll, while the Congress had all its bigwigs planted and positioned in the two constituencies all through, Chief Minister B S Yediyurappa was far from the scene until the eve of the elections.

It was Vijayendra who was given the charge of yet another Vokkaliga dominion, where the Lingayats, the community which his father is seen as a prominent face of, has hardly 5,000 votes out of the total 2.5 lakh votes.

And it is this social engineering that he has been working on, from meeting individuals and community leaders to seers of all the ‘influential mutts, as well as door-to-door campaigning.

Vijayendra was seen overly active on the ground, having camped at Sira ever since he recovered from Corona on 15 October.

The party focussed on targeted, cluster-based campaigning with leaders from the said communities campaigning for the candidate; be it the prominent Vokkaliga faces like Deputy CM Ashwath Narayan and Health Minister S Sudhakar, or Deputy CM Govinda Karol wooing the Scheduled Castes, which are the second highest in the region, or K S Eshwarappa addressing the Kurubas, or B Sriramulu engaging the Valmiki voters, or many other leaders specifically addressing the other smaller communities like the Balijas.

Although he isn’t seen highlighting the caste factor, Vijayendra is confident of a victory margin of around 20,000 votes, say sources. This, in a seat, where the party’s candidate didn't even win 10 per cent of the votes the last time around.

S R Gowda of the BJP had come third, winning just 16,959 votes, while the winner, Satyanarayana of the JD(S), whose demise has necessitated the bypoll, had secured 73,338 votes.

The Congress candidate, T B Jayachandra, was a close second at 63,793 votes.

Today, one can see a high possibility of the BJP denting the vote of, if not snatching the seat away from, the Gowda clan.

Amajamma, the widow of Satyanarayana, who is the JD(S) candidate, has been absent from the whole scene as she was recovering from Covid, making a guest appearance only on the eve of the polls.

The JD(S) rode on the sympathy wave with her son campaigning for her, and the whole Gowda clan trying to woo the voter with the ‘vote or we shall perish’ line.

Vijayendra, meanwhile, has been seen saying loud and clear that the ”BJP will shock the JD(S) and the Congress this bypolls” with both Opposition parties seeming visibly worried of a repeat of his KR Pete success.

“Vijayendra’s statement has presented me with a challenge and I won’t allow him to finish off JD(S) in Sira,” said the octogenarian former PM and Gowda grandman, H D Devegowda.

HD Kumaraswamy, too, seems to have made it about junior BSY as he reiterated his father‘s sentiment saying “voters and the election pattern in Sira is different from KR Pete. Will not allow Vijayendra to succeed”.

If he manages a victory in Sira, it will be a huge feather in his cap, but even if he manages to breach the wall of the JD(S) fortress, it would be a case of a second rung leader making a strong case for himself and his ‘winnability’ prospects to the party high command, brushing the dust of ‘dynasty’ aside.