Kejriwal’s Choice: To Be Half A CM Of Delhi Or A Full CM Of A Truncated One 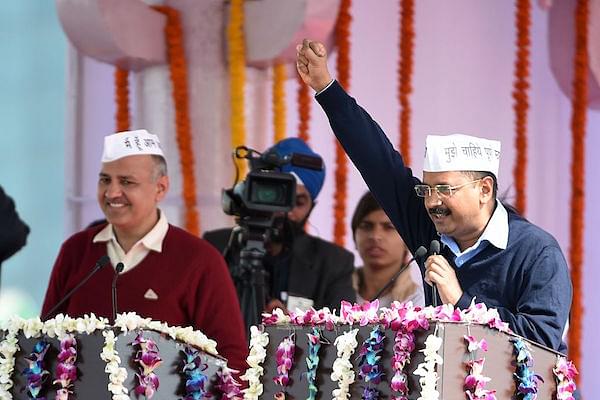 The resounding slap delivered by the Delhi High Court to Arvind Kejriwal in his battle against Lt Governor Najeeb Jung is unlikely to make the man reasonable. The fight is heading to the Supreme Court, but while the latter’s verdict may be a little more pleasing to Kejriwal’s ears, it is difficult to envision a situation where the Supreme Court can reject the basic law and conditions under which Delhi was made a state.

The Delhi High Court bench, comprising Chief Justice G Rohini and Justice Jayant Nath, made it clear that the “concurrence of the Lt Governor in administrative issues is mandatory.” Further, it held: “On a conjoint reading of Article 239 AA… and provisions of the government of NCT Act, 1991… it becomes manifest that Delhi continues to be a Union Territory…The power of LG to act in his discretion is not confined to the Constitution. The LG… acts on his own judgment without seeking the aid and advice of the council of ministers.”

To which Deputy Chief Minister Manish Sisodia raised a legitimate counter: “If Delhi was to be run by the LG, why was the Constitution amended to have a state assembly?”

The answer: Delhi is both a state and a Union Territory by character. As the seat of power of two governments – the state and the Centre – it cannot be governed purely by an elected Chief Minister. Unlike other state Governors, who have to act on the advice of the state cabinet, Delhi’s Lt Governor has executive powers – which is what makes Delhi both a Union Territory and a state.

Of the seven Union Territories in India, Delhi and Puducherry have dual characteristics, since they have state assemblies and Chief Ministers. But their Lt Governors have real powers. The other five Union Territories – Chandigarh, Lakshadweep, Andaman & Nicobar Islands, Dadra & Nagar Haveli, and Daman & Diu – are directly ruled by the Centre without elected state assemblies.

More specifically, even after the state of Delhi was created, the 69th Constitutional Amendment Bill that enabled it made the powers of the Lt Governor absolutely clear; he is not meant to be a figurehead. (read the law here)

Article 239 A(1) says: “As from the date of commencement of the Constitution (Sixty-ninth Amendment) Act, 1991, the Union Territory of Delhi shall be called the National Capital Territory) and the administrator thereof appointed under article 239 shall be designated as the Lieutenant Governor.” (Italics mine).

The operative words are “called” and “administrator”. What changed with statehood for Delhi was not the nature of its Union Territory status but its form and name as the “National Capital Territory”. Also note that the Lt Governor is meant to be an “administrator”, and not someone who merely signs on the dotted line.

Article 239(A)(4) makes the relative positions of the Delhi Chief Minister and the Lt Governor even clearer. It says: “Provided that in the case of difference of opinion between the Lt Governor and his ministers on any matter, the Lt Governor shall refer it to the President for decision and act according to the decision given thereon by the President and, pending such decision, it shall be competent for the Lt Governor in any case where the matter, in his opinion, is so urgent that it is necessary for him to take immediate action, to take such action or to give such direction in the matter as he deems necessary.” (Italics mine)

This clause makes it clear that the Lt Governor can take his differences with the Chief Minister “on any matter” to the President, which means the Central government, and more specifically, the Home Ministry.

This means the Centre can, with sufficient cause, suspend the very laws that created the state of Delhi. At worst, the courts can say these decisions were mala fide, but only much later.

This brings us to Sisodia’s point: Why did the Centre create Delhi as a state if the Lt Governor is going to run it?

It is quite possible that the Supreme Court may answer this question by reading down this law, which effectively knocks the stuffing out of state powers in Delhi, but the court itself cannot change a law created by Parliament, though in recent times it has been doing precisely that.

The problem is not the law but Arvind Kejriwal. Laws can be tweaked to take them closer to the spirit in which they were made, but straightening out the megalomania and paranoia of a Kejriwal takes a shrink, not a court. And it would take a courageous shrink to take on Kejriwal.

It is worth recalling that even though past Delhi Chief Ministers have sought more powers, especially over the policing, they managed to achieve a lot even without those. Sheila Dikshit won plaudits as a good Chief Minister despite the limitations to her powers.

The problem, to emphasise again, is Kejriwal. Even granting that the state needs more powers, he cannot deny the legitimacy of the Centre’s role in the territory.

Delhi is different from other states for obvious reasons: as the seat of power for both the nation and the city, power has to be shared. More importantly, the jurisdiction of the state of Delhi cannot extend to the Centre; in fact, it should always be the other way around. Even more so, the National Capital Region of Delhi – which includes the state of Delhi and adjoining territories in two other states, Uttar Pradesh and Haryana – will involve sharing jurisdiction not only with the Centre but two neighbouring states as well. Kejriwal can have full powers only in a small part of the areas we now call Delhi.

Given the general unreasonableness of Kejriwal’s demands and political posturing, it is difficult to see how any sensible central government can think of transferring more powers to him. Building confidence in his reasonableness is Kejriwal’s job, not the Centre’s. On the contrary, Kejriwal has repeatedly done the opposite by going bonkers and making wild allegations. Among other things, he has called the Prime Minister a “psychopath” and expressed fears that the Centre may kill him. You don’t hand over more powers to a paranoid individual like this man.

Kejriwal’s real (but unstated) grouse is that he is too big a man to be ruling a small city like Delhi, which is why, after promising “Paanch Saal Kejriwal” he immediately installed Manish Sisodia as Deputy Chief Minister after winning a thumping majority in February 2015. Is Delhi such a complex state that it needs a Chief Minister and a Deputy Chief Minister, and that too when there is no coalition partner to share power with?

The arrangement is clearly about Kejriwal being left free to chase his national ambitions, leaving Sisodia to plough on with the Delhi administration. If the matter had been between Sisodia and Jung, the ego tussle probably would have been easier to handle. Kejriwal’s big ego has ruined possibilities of a realistic truce.

A sensible Chief Minister other than Kejriwal would have negotiated a better deal on power-sharing, but Kejriwal has needlessly made enemies out of those who could have been his allies. Lt Governor Jung was not a Bharatiya Janata Party appointee; he should have been on Kejriwal’s side in his battle with the Centre over more powers, but how he has been antagonised.

The only logical solution to this power imbalance is a bifurcation of Delhi. This would mean the following:

- Separating the New Delhi Municipal Corporation and Cantonment into a separate Union Territory run by the Home Ministry.

- The rump Delhi state should have its own police force, and a share of the Delhi Development Authority, which too needs to be bifurcated. Here Kejriwal can be a true leader.

- But even in the rump state, central offices located in this zone, and central bureaucrats posted here, will fall in the national government’s jurisdiction. Just as diplomatic missions housed in another country are considered part of the foreign government’s sovereign territory, central offices and officers based in Kejriwal’s Delhi have to be taken out of his jurisdiction. Given Kejriwal’s belief that he is the only honest man in India, one can imagine what he will do to central babus if given the power to launch cases against them at will.

There are solutions to the problem of Delhi state not being as sovereign as the other Indian states, but only a Kejriwal seems incapable of grasping the opportunities for negotiating reasonable freedoms even while recognising its obvious limits.

Put another way, the powers of Delhi have been truncated by the man now trying to wield it in bad faith.