Kerala Reclaims Identity: Ayyappa Bhaktha Sangamam Turns Out To Be The Largest-Ever Hindu Congregation In The State 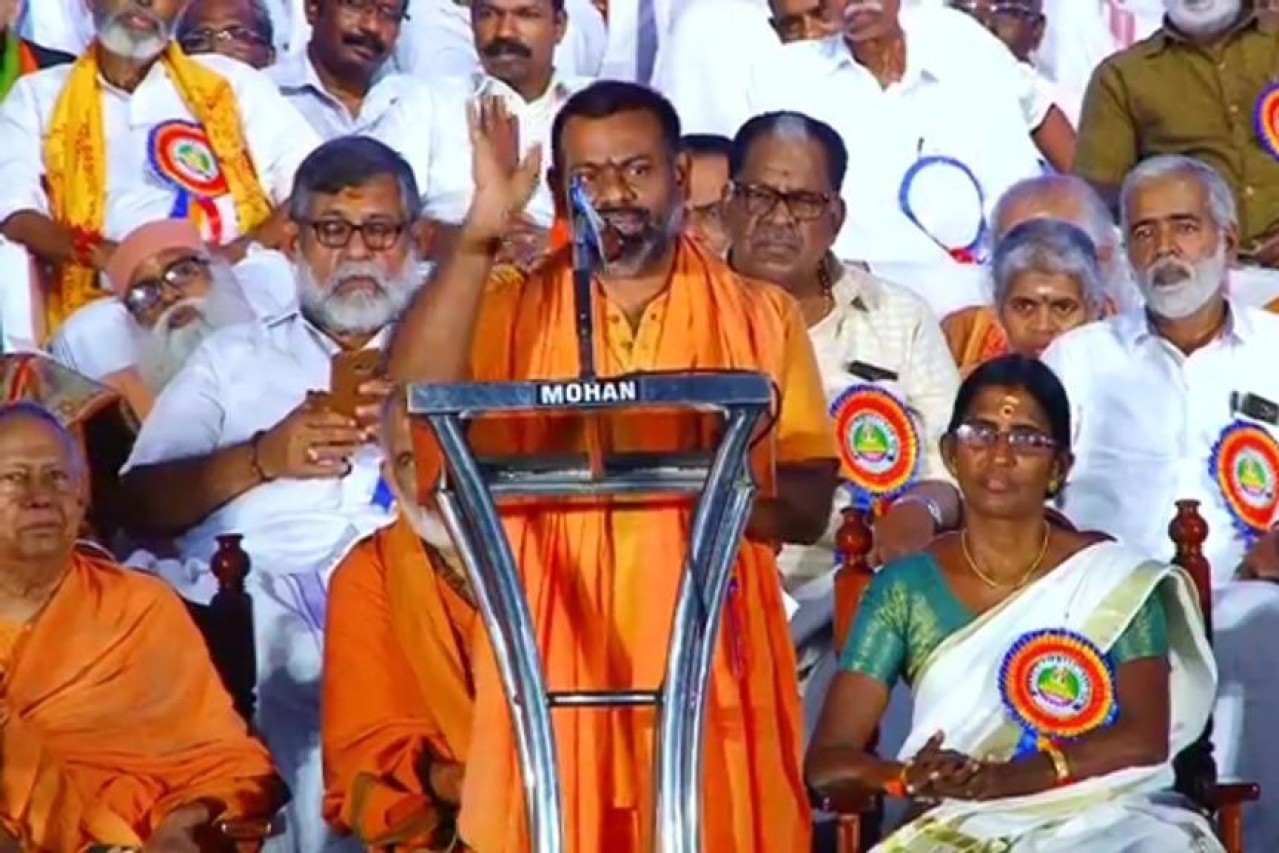 Delegates at the event

Sending a stern warning to the ruling Communist Party of India (Marxist) or CPI(M) that has been incessantly trying to destroy temple traditions and Hindu customs in Kerala, the Sabarimala Karma Samiti organised a mammoth gathering.

‘Ayyappa Bhaktha Sangamam’ in Thiruvananthapuram, the capital city of Kerala that was held on 20 January, witnessed a large number of sanyassins and spiritual leaders from across south India and lakhs of Hindus. This is said to be the largest Hindu congregation ever in the history of Kerala.

Inaugurating the meeting, Mata Amritanandamayi urged the communist government of Kerala to respect the traditions and customs of Hindu temples. “The controversy about young women’s entry to Sabarimala temple is unfortunate, and it emanates out of ignorance about temple customs and traditions. Temples are the pillars of our culture,” she said.

Referring to the government’s intervention in temple affairs, Mata Amritanandamayi said that the situation is such that “the baby is thrown out with the bathwater”.
Presiding over the event, Swami Chidananda Puri said that temple traditions could not be altered by a secular government.

Criticising the state government and the ruling CPI(M), he said that Hindus should be thankful to Kerala Chief Minister Pinarayi Vijayan for ‘organising’ the Hindus of Kerala against the backdrop of the Sabarimala issue. He also condemned the repeated verbal assaults made by communist ministers against Hindu sannyasins and priests.

“Sri Ayyappa is not just the god of Kerala but of the entire country and the whole universe. Vijayan, being the Chief Minister of Kerala, can administer the people of the state, but he can’t administer Ayyappa Bhagwan,” said Swami Paripoornanda.

In a video message, Sri Sri Ravi Shankar underscored the need to protect traditions, and urged the government to respect the sentiments of devotees.

Speaking at the occasion, former director general of police Dr T P Senkumar urged the devotees to exercise voting rights vigilantly in the coming elections to give a fitting answer to all anti-Hindu parties and protect Santana Dharma. “All our problems will be solved if a small amendment is made in our Constitution that the majority too will be entitled to the same benefits enjoyed by the minorities in the country,” he said.

Bharathbushan, brother of Kanaka Durga, a CPI(M) activist who trespassed on the Sabarimala temple only to defile the traditions, was also present at the gathering. Apologising to devotees for the sin committed by his sister, Bharathbhushan broke down and said, “I apologise for the sin my sister has committed. We won’t allow her to enter our house unless she gives an unconditional apology to Hindu society.”

While ordinary women formed the majority of the audience, a galaxy of senior Hindu sannyasins, including Swami Prakashananda and senior sannyasin of Sree Narayana Gurudeva order and Swami Golokananda of the Ramakrishna Math, were present.

Hindus in large numbers thronged the Putharikkandam Maidanam, where the event was organised. Many devotees, who participated in the Namajapa Yatra that was held ahead of the meeting, failed to reach the venue as the roads leading to the ground was jam-packed.

This article first appeared in Organiser and has been republished here with permission.